From the darlings of the AFL to a downright embarrassment: How it all went wrong for the GWS Giants

The GWS Giants endured a nightmare final on Saturday, copping an 89 point drubbing to the Richmond Tigers which left them with the lowest Grand Final score of any team in 60 years.

It was the first Grand Final appearance for the Giants and one they would surely like to forget, managing only three goals in the encounter, with the Giants going from the darlings of the AFL to an embarrassment in just seven days.

Media coverage spurred on fans to turn out at the Melbourne Cricket Ground for the new team, which was founded in 2010, and given all the help in the world to succeed.

But despite the heavy publicity and a growing bandwagon, the Giants, who entered the ground to a chorus of booing, were no match for the Tigers, who took home their 12th flag to ecstatic cheers of support. 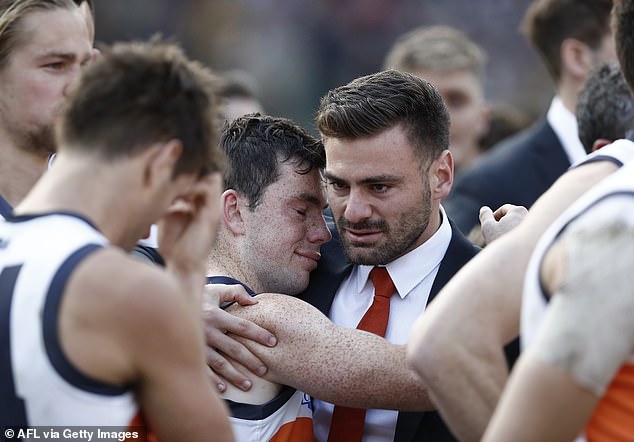 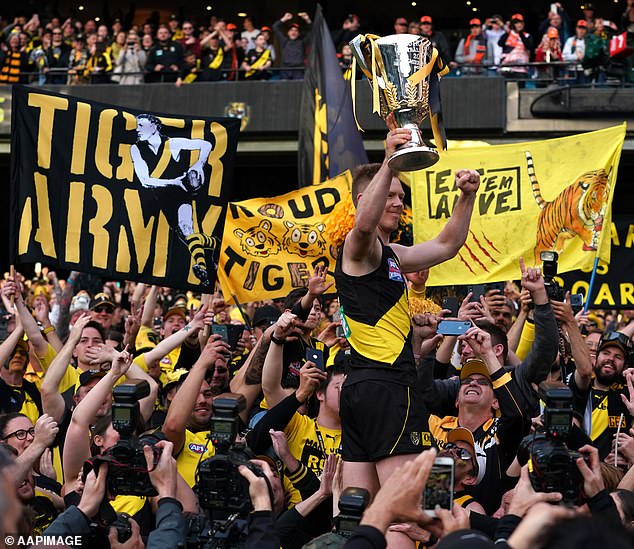 Richmond were relentless in the forwards with 59 inside 50’s, putting the Giants on the back foot early and keeping their foot on the gas.

Jack Riewoldt top-scored with five goals for the Tigers, who ran rampant over the hapless Giants in front of 100,014 fans at the MCG.

Riewoldt personally outscored the Giants, who despite over $200million in handouts from the AFL and draft picks and an increased salary cap left the MCG with little more than a whimper.

Three-time premiership winning coach Leigh Matthews called the Giants ‘sad and embarrassing’ and he wasn’t the only one, as the big, big sound from the west of town was swallowed by the Richmond faithful and sent packing.

Fans on social media were wishing Giants bad boy Toby Greene had gouged their eyes out so they couldn’t watch the unfolding flogging. 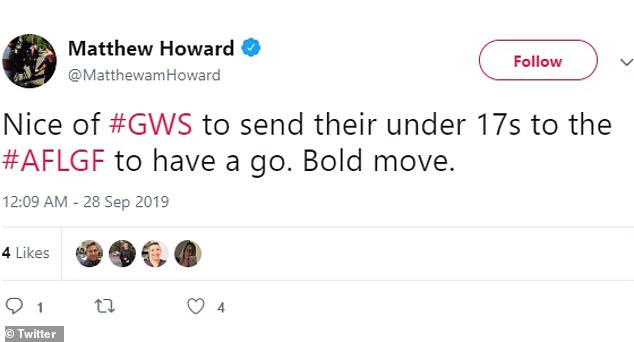 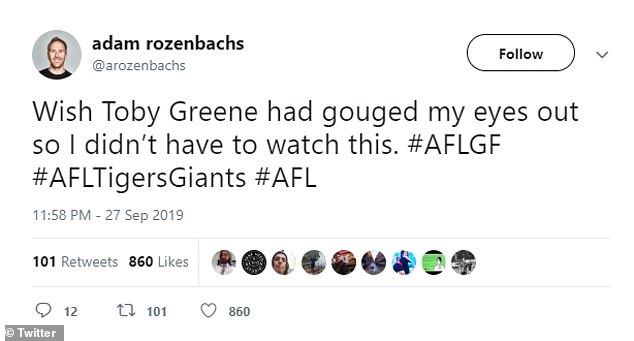 With faltering stars including Greene and Matt de Boer, the Giants simply couldn’t keep up and were left humiliated by the Tigers, with some fans not even able to see out the end of the game.

Giants coach Leon Cameron told reporters his side was disappointed with their performance after a strong showing in the finals series.

‘It’s a Saturday in September that you want to be at, but clearly after quarter time we as a footy club didn’t play a brand that could stand up to Richmond,’ Cameron said.

‘We’re rapt that we’re playing on the big stage, but disappointed that we didn’t live up to our end of the bargain and bring a bigger spectacle.’ 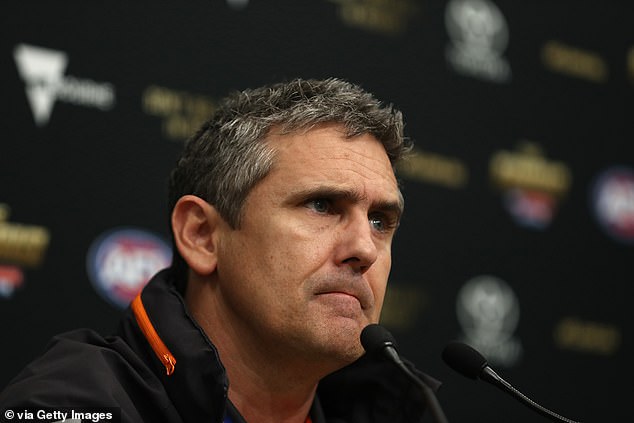 ‘We’re rapt that we’re playing on the big stage, but disappointed that we didn’t live up to our end of the bargain and bring a bigger spectacle.’ – GWS Giants coach Leon Cameron (pictured)

The Giants made a shock last minute change to their squad, with Phil Davis being named in their final 22 just hours before first bounce.

Davis was exposed by Riewoldt, seen trailing behind his man in the first quarter, who told 7News that his side deserved more on the day.

‘We had to fight for so many different things, we had to keep finding different paths,’ Davis said.

‘That’s the glue that will hold the club together and hopefully we can get a bit of luck and also improve.’

‘We need to get better because we want to be back.’

After scraping past Collingwood in last weeks preliminary final, the hype was real for Giants fans, as the franchise geared up for the biggest match in their eight year history.

Sydney was painted orange in the lead-up to the clash, with landmarks including the Harbour Bridge being lit up in the Giants signature orange hue.

After being outclassed all over the park by a united Richmond outfit, Giants fans were seen leaving their seats in the stadium as early as the third quarter.

It wasn’t the performance they were expecting. 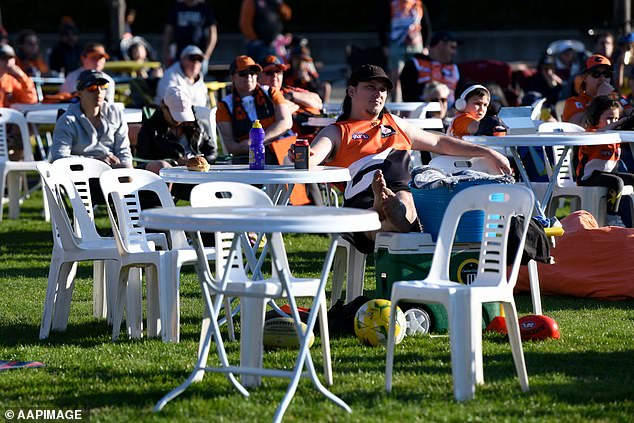 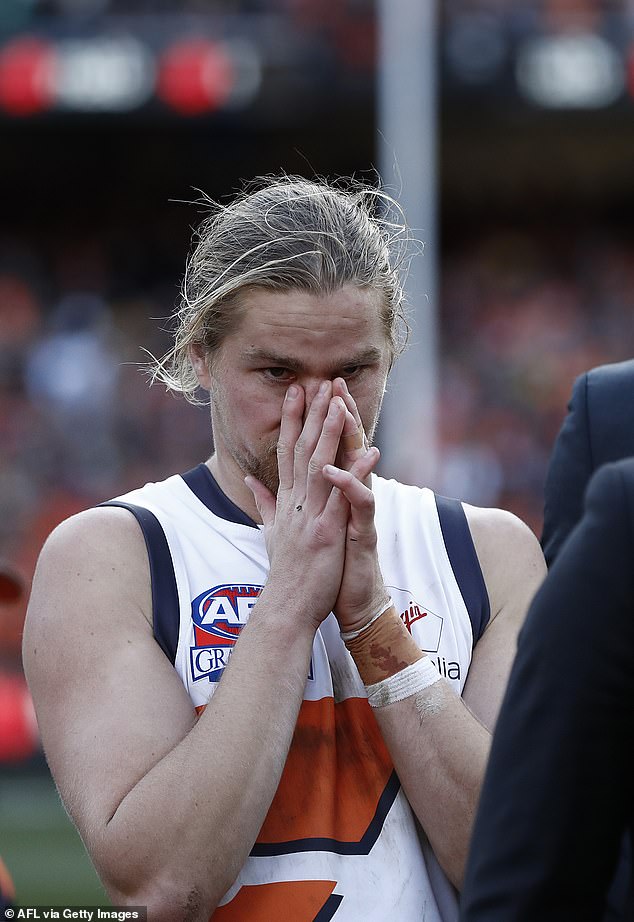 The Giants kicked the first goal of the match and briefly led in the first quarter, but the Tigers were too good and dominated from the first bounce.

More than an hour passed between the Giants first two goals, but the team simply wasn’t up to speed with the Tigers, who stamped their authority on the field as the undoubted best team in the competition.

With a 62-point buffer at three-quarter time, the final stanza became a training drill for the Tigers, as the Giants waited for the clock to end their nightmare.

Tim Taranto and Heath Shaw battled hard in defense for the Giants, but they were swamped by a comprehensive team effort from Richmond, who at one point kicked 11 straight goals.

The Tigers have now managed two premierships in three seasons, with Dustin Martin winning the Norm Smith medal for the second time, with 22 disposals and four goals. 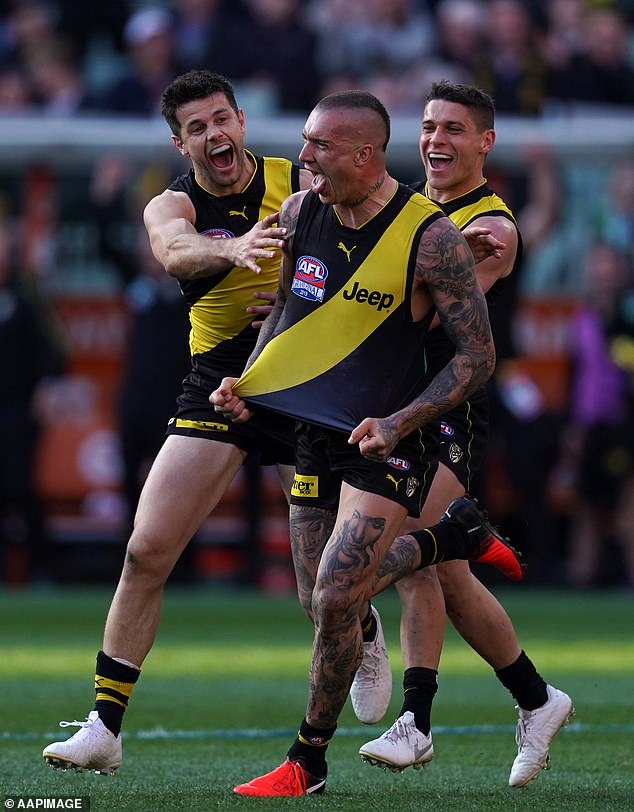