From the palace fireside, Queen makes a heartfelt call for harmony

The Queen will preach a message of conciliation to a nation divided by issues such as Brexit in her Christmas broadcast tomorrow.

Speaking about the birth of Jesus and the Christmas story, she will say: ‘I believe his message of peace on Earth and goodwill to all is never out of date. It can be heeded by everyone; it’s needed as much as ever.’

She will also reflect on the importance of treating others with consideration, saying: ‘Even with the most deeply held differences, treating the other person with respect and as a fellow human being is always a good first step towards greater understanding.’

It understood that the Queen means to highlight the current manner of political discourse surrounding contentious issues such as Brexit, which has become bitter in the extreme.

The Queen records her Christmas Day message, in which she will preach a message of conciliation to the nation, in the White Drawing Room of Buckingham Palace

Although it was filmed a fortnight ago, its release is particularly timely given last week’s incident in which Labour leader Jeremy Corbyn was allegedly seen to mutter ‘stupid woman’ about Theresa May during Prime Minister’s Questions in Parliament, leading to widespread public outrage. He has denied the remark, claiming he actually said ‘stupid people’.

The Queen, although politically neutral and scrupulous in her efforts not to take sides, is clear, however, in her message to politicians of all parties and on both sides of the Brexit debate: Listening to others and treating those who oppose you with respect leads to better understanding when we disagree.

Indeed, the Queen will refer in her speech to the places from which she draws strength and encouragement, family being one of them.

Hard-working Anne leaves Wills and Harry in the shade

The Queen’s four children carried out the most official royal duties this year, with Princess Anne the hardest-working for the third year in a row.

Analysis of palace statistics reveals that Charles, Andrew, Edward and Anne undertook 675 days of engagements – more than double the number carried out by the younger royals.

Anne was the busiest, working 180 separate days, according to examination of the Court Circular, the official list of royal engagements.

In contrast, Prince William worked for 120 days, with Prince Harry completing 98. Both their wives carried out around 50 days of engagements, although that number is expected to rise significantly next year. Kate had several months off on maternity leave and Meghan was not added to the circular until her wedding in May.

While the Queen’s children have been regularly helping her with the more traditional duties such as charity visits and plaque unveilings, the younger generation have tended to focus on fewer projects that they have initiated, including their Heads Together mental health project.

And although William and Harry worked fewer days than their father, aunt and uncles, the number was up a fifth on 2017.

The Queen herself worked for more than 120 days, often welcoming heads of state. Prince Philip has scaled back his duties, but the 97-year-old still managed six official engagements.

Much of his work has been taken over by Edward, who was the second hardest-working royal on 170 days, followed by Charles on more than 160 days and Andrew on more than 140.

The number of days worked by the royals can differ greatly from the actual number of engagements, as many may take place in a single day.

She will say: ‘Through the many changes I have seen over the years, faith, family and friendship have been not only a constant for me but a source of personal comfort and reassurance.’

The Christmas message was filmed in the White Drawing Room at Buckingham Palace on December 12 and has been produced this year by Sky News.

The Queen wears a silk and lace cocktail dress by her senior dresser, Angela Kelly, and a gold, ruby and diamond brooch which was a present from the Duke of Edinburgh in 1966.

A 1949 picture showing the couple with a six-month-old Prince Charles stands prominently on her desk, a reminder that the Prince of Wales celebrated his 70th birthday last month.

Catching the eye amid the splendour of the drawing room is a gilded piano that was made for Queen Victoria in 1856.

Yesterday the Queen was seen braving heavy rain to attend church at Sandringham, her Norfolk estate, where the Royal Family is gathering for the festive season.

A crowd of around 200 huddling under umbrellas were gathered to watch her arrive by car for the carol service at St Mary Magdalene Church, but were disappointed when 97-year-old Prince Philip failed to attend. Despite his advancing years, Philip walked around 400 yards from Sandringham House to the church nearly every Sunday during the Royal Family’s Christmas break last December and January, but following his hip replacement earlier this year is clearly taking things easy.

A royal source denied that there were any fears for Philip’s health, pointing out that he had been photographed at a Christmas party at Buckingham Palace last Wednesday.

The Queen was driven to the service in her maroon Bentley with Prince Edward, his wife the Countess of Wessex and their 15-year-old daughter, Lady Louise Windsor.

The Queen, who wore a red and grey tweed coat with a matching festive feathered hat, looked well as she walked briskly into the church while sheltering under an umbrella.

A Buckingham Palace spokesman refused to say why the Duke of Edinburgh had not attended, describing the Royal Family’s stay at Sandringham as ‘private’.

Veteran royal watcher Alan Mowton, who has been in the crowd at Sandringham church services every Christmas for 41 years, said: ‘I thought the Queen looked very well. It was lovely to see her. 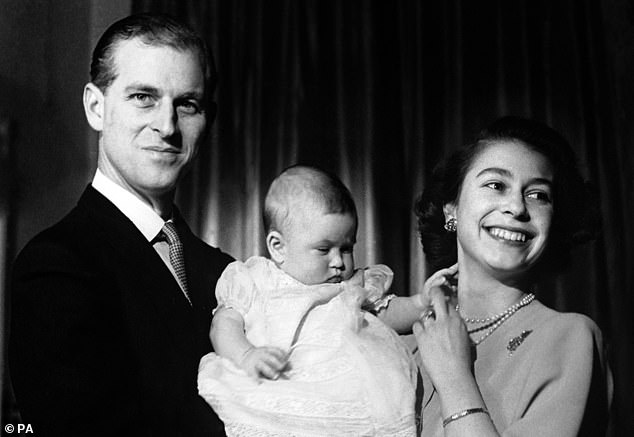 This picture from April 26, 1949, showing a 23-year-old then-Princess Elizabeth with the Duke of Edinburgh and a baby Prince Charles, was on the Queen’s desk during the broadcast

‘It was a bit of a shame not to see Philip, but it is understandable that he might miss a service at his age, particularly when the weather is like this. But in previous years we have seen much worse weather here and he has turned out.’

Prince Edward joked about the weather with the crowd as he got out of the front passenger seat, saying to them: ‘You must be very keen or foolish to stand here!’

Cafe owner Ian Roper, 52, of Sheringham, Norfolk, replied instantly: ‘We are here to see you.’ The prince promptly retorted: ‘Really… I hope the sun comes out for you.’

Mr Roper said: ‘He was very friendly and it was nice for him to say a few words.’

Rachel Stewart, 45, of Dersingham, Norfolk, who was also in the crowd, said: ‘The Queen looked in a bit of a hurry because of the rain today. Normally she gets out of the car much slower.’

The service was conducted by Sandringham rector, the Rev Canon Jonathan Riviere, who said prayers ‘for the aged and little children’.

The congregation joined in the singing of carols Once In Royal David’s City, Away In A Manger, Silent Night, While Shepherds Watch Their Flocks By Night and Hark The Herald Angels Sing.

Other members of the Royal Family are expected to arrive at Sandringham today and to join the Queen at a church service tomorrow.