This psychological thriller is about a mother who, over 20 years, has to face up to the disappearance and murder of her ten-year-old daughter.

Her wait ends when we zoom forward to the apprehension of the multiple child-killer, Ralph.

Normally, encountering such killers in fiction has me convinced that capital punishment had its virtues. Bryony Lavery’s play, however, demands – and gets – a more mature understanding, by asking if such killers are evil or just ill. 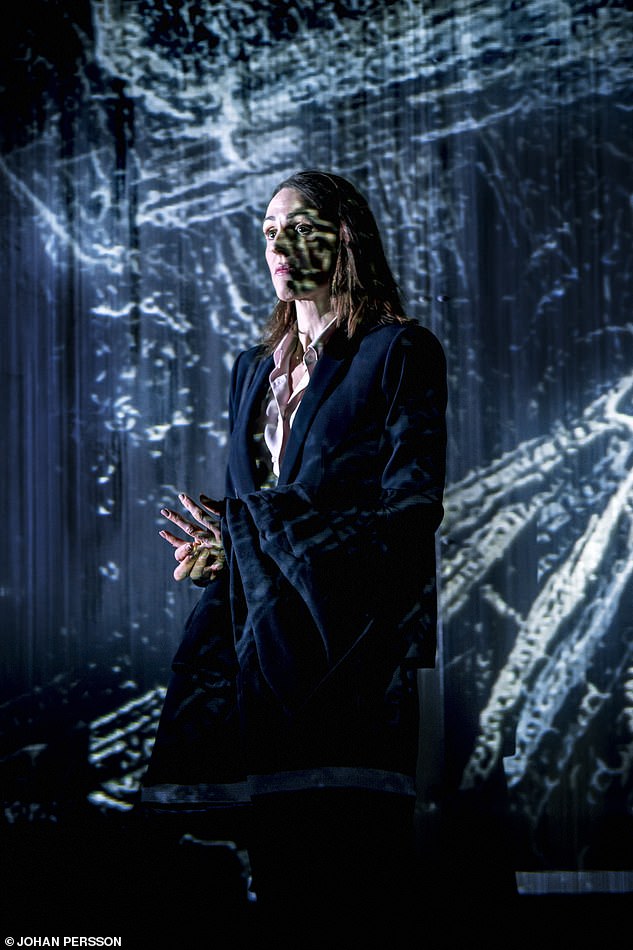 Suranne Jones – of Doctor Foster telly fame – is terrific as wrung-out mum Nancy, keeping her girl’s bedroom tidy for the big day when she will miraculously come home 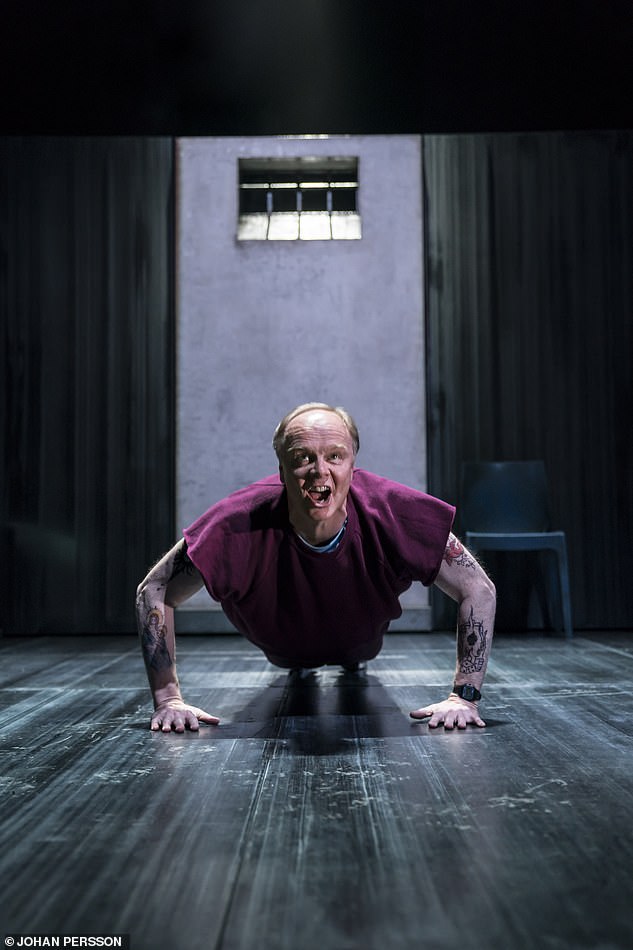 But the play rotates around Ralph, sublimely played by Jason Watkins with a limp, a Brummie accent and an obscene self-satisfaction

Suranne Jones – of Doctor Foster telly fame – is terrific as wrung-out mum Nancy, keeping her girl’s bedroom tidy for the big day when she will miraculously come home. But the play rotates around Ralph, sublimely played by Jason Watkins with a limp, a Brummie accent and an obscene self-satisfaction. He talks about his van, his ‘centre of operations’, and pats the suitcase containing his proud collection of child pornography videos.

In addition there’s an American criminal psychology lecturer (Nina Sosanya) who visits Ralph in prison and whose own tragedy seems bolted on to a play that’s already got quite enough going on. Through her lectures from a podium, we are invited to survey ‘the frozen Arctic sea that is the criminal brain’. As if to prove the dramatist’s point, her encounters with Ralph in prison unearth his own hellish childhood abuse.

Directed by Jonathan Munby, this humane, award-winning 1998 play feels a bit diluted by umpteen series of more recent TV killer psycho-dramas. It only feels exceptional when it’s really raw. In the final encounter between mother and murderer, you can hear a pin drop.

Frozen is definitely not to be confused with the Disney film, though oddly enough its message of ‘let it go’ is much the same.

I met my husband in the queue to board an easyJet flight and I have to say I took an instant dislike to the man.’ That’s the brilliant opening line to this funny, harrowing, one-woman play by Dennis Kelly, performed by the Oscar-nominated Carey Mulligan (currently on TV in David Hare’s Collateral). 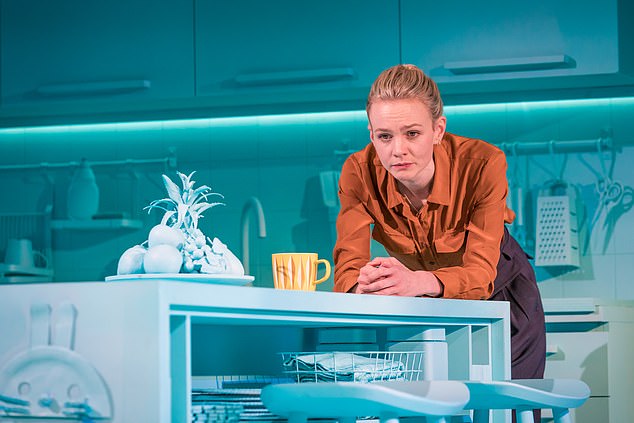 What we get from Carey Mulligan is a prolonged, witty chat. She reveals a hedonistic sex life (frank, funny and rude) prior to the man in the Naples airport queue

She stands centre stage, in trousers and a shirt, hair up, barefoot. Her estuary accent isn’t wholly convincing, and there’s a worry, as with all solo plays, that there’s no supporting cast for a change of scenery. But I leant into this play from the front of my seat, partly because Mulligan is not totally audible in the circle – the director take note – but mostly because she is such a superb storyteller.

What we get is a prolonged, witty chat. She reveals a hedonistic sex life (frank, funny and rude) prior to the man in the Naples airport queue. He starts up a furniture importing business, she becomes a success making TV documentaries. All is lovey-dovey. They have a girl and a boy. She mimes picking them up, scolding them, playing games. The tone changes when his business goes bust. He stops washing and plays video games all day.

‘He became unreachable… he just spiralled,’ she says.

I won’t totally spell it out, but the conclusion is a tale of immense violence. Mulligan’s dimpled features are drawn and blank as we learn of unspeakable events, in pathologist’s report detail, that have led her into a wasteland of grief.

The designer-flat set is a triumph but it’s totally superfluous. The narrative does its own gripping job, directed with sudden slipknots of tension by Lyndsey Turner. By the end I was biting the back of my hand.

With an amazing performance from Mulligan, this short play hits home with shocking force.

You mess with Noël Coward’s plays at your peril – especially this perennial crowd-pleaser, for which he wrote the main role of Elyot for himself. It’s difficult to get away from the springy rhythms and witty verbal ping pong that animate this tale of a divorced couple who marry again, find themselves on honeymoon with their new spouses in the same hotel and end up rekindling their combustible relationship. 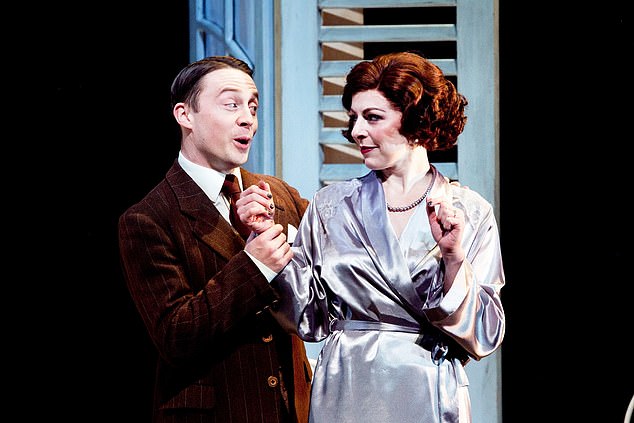 The antics of these louche, self-absorbed people should be sparkling, but how do you reconcile this with Elyot hitting paramour Amanda and opining that women should be struck regularly ‘like gongs’. These days this jars horribly (and there was a gasp from the audience).

The solution in Michael Cabot’s production is to play Elyot as a spiky, dyspeptic type. Gareth Bennett-Ryan’s interpretation works to a point but is mostly too flat (like Norfolk in one famous line).

Olivia Beardsley’s Amanda, played with a gravelly, knowing gurgle, fares better. As the dumped spouses, Helen Keeley blubs for Britain as Sybil, and Paul Sandys’s Victor is a perky bantam of a man rather than the usual dullard. But by trying to unleash something darker amid all the stylish affectation, this is just too lumpy and uneven.

This play is based on Lisa Genova’s bestselling novel of the same title, about a brilliant neuroscientist in America who finds she has early-onset Alzheimer’s at the age of 50.

Sharon Small plays the Harvard lecturer who forgets words, gets lost on a local run and can’t even find her way around her own house. It’s a good performance, refreshingly unlike the absurdly over-glamorised acting that won Julianne Moore an Oscar in the 2014 film. 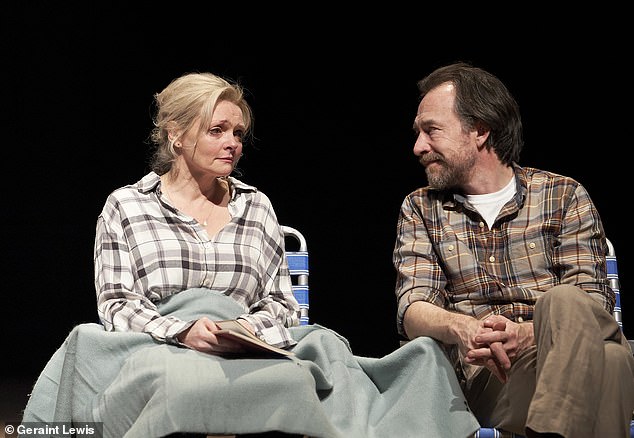 Sharon Small (above with Dominic Mafham) plays the Harvard lecturer who forgets words, gets lost on a local run and can’t even find her way around her own house

Dominic Mafham plays Alice’s chippy scientist husband John who, along with her son and daughter, watches her mind slowly crumble like a sand castle in an incoming tide. Christine Mary Dunford’s adaptation is not sure-footed, though. It requires an actress (Ruth Gemmell) to play Alice’s inner voice (very stagey), and the disease’s effect on the family is rather skated over.

It’s undeniably a sad evening, directed with compassion by David Grindley. But it’s much less dramatic than the testimony of Alzheimer’s sufferer Wendy Mitchell, whose Somebody I Used To Know was just read to shattering effect as Radio 4’s Book Of The Week.

Howard Brenton’s lively new play, set in war-torn Southampton, opens a brand new theatre in the city. It tells the story of the Luftwaffe’s destruction, in 1940, of the Supermarine Spitfire factory. 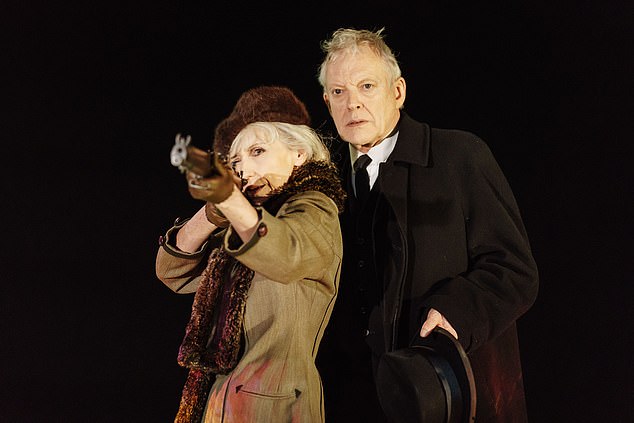 In an excellent cast with a community chorus, Anita Dobson doubles as a generous aristo and a local granny and Hilton McRae plays the gruff Beaverbrook

Lord Beaverbrook – the Minister of Aircraft Production – orders the requisitioning of local premises to carry on making Spitfire parts in so-called ‘shadow factories’. But fictional Fred Dimmock, who runs a laundry, stoutly resists the takeover.

The play shows the proud locals torn between saving their country and their way of life; they resist Hitler but also, at first, Churchill’s no less dictatorial government.

In an excellent cast with a community chorus, Anita Dobson doubles as a generous aristo and a local granny. David Birrell is the laundry owner and RAF supremo Hugh Dowding, and Hilton McRae plays the gruff Beaverbrook.

Samuel Hodges stages superbly a play that celebrates both the plane and the courage of the city that built it.

When Robert Louis Stevenson wrote his gothic novella of split personality in 1886, it was a bit of a rush job – he needed to pay off some bills rather swiftly. Perhaps that’s why it runs to only 70 pages. 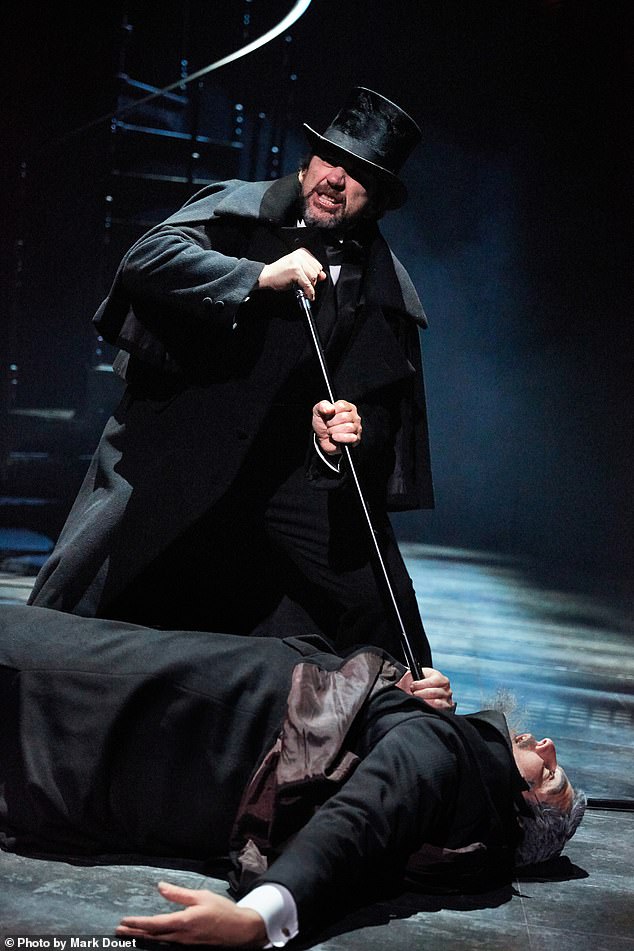 In this version from 1991 David Edgar bulks it out by adding in social comment and the character of Jekyll’s sister, a Leftleaning ‘new woman’ as a contrast to the Victorian murk with its clubby, men-only spaces.

Jekyll here is avuncular, mild-mannered, with a (rather erratic) soft Scottish accent and roots out his late father’s potion in the interest of psychic research. As we know from the many adaptations of this tale, the draught turns him into the disturbed alter ego, Mr Hyde.

This transformation is not easy (it can be faintly absurd). Sometimes both sides of the good doctor are played by two actors, but here it’s Phil Daniels, with a swirling cloak, top hat and rictus leer, whose heavily accented Hyde seems more likely to inflict a Glasgow kiss than murderous intent.

Kate Saxon’s production tries to keep it all flowing but there’s an inertness here, not helped by Edgar’s wordy adaptation. The set looks cheap and the lighting is harsh rather than moody – it’s a chill-free zone.