Google’s ‘smart’ speakers have failed to live up to their name.

The smart speakers house the AI-powered Google Assistant which responds to voice commands and requests.

Users worldwide reported that queries were met with the response of ‘there was a glitch’ or ‘sorry, something went wrong’ and to ‘try again in a few seconds’, but the device still failed to work.

Many user also said the glitch meant their morning alarms on their smart speakers failed to go off.

The technology giant said it has corrected the issue, confirming it had also affected some of its Chromecast TV streaming devices.

‘We’ve rolled out a fix for the issue impacting Google Home and Chromecast users. If you’re still experiencing an issue, contact us at Google Home Support,’ a Google spokesman said.

‘We are really sorry for the inconvenience and are taking steps to prevent this issue from happening in the future.’

Google has not disclosed the cause of the issue, but said users should reboot their device to get it working again.

Users reported a range of issues, including some who claimed the issue meant their wake-up alarms did not go off and caused them to oversleep.

This week, Google rolled out a software update for Google Home which allows the smart speaker to respond to commands made in Spanish.

If a bug was present in this update, the inter-connectivity of all Google devices would mean it could spread easily.

These comes less than two weeks after the same devices were hit with another bug that revealed the location of its user to potential hackers.

@Google is playing with my emotions today. Alarm didn’t go off b/c Google Home decided it wanted to stop working, now it keeps saying ‘device isn’t set up…’ Then my phone keeps telling me that 2NE1 came out with a new album today #fakenews I thought we were cool family, why? pic.twitter.com/SsoKg3oNCV 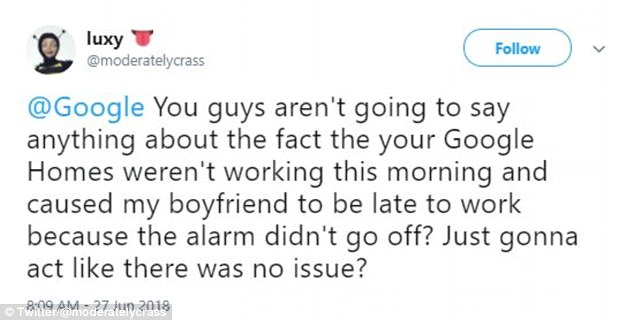 Social media indicates the issue likely started around 09:00 BST (04:00 ET), with many pointing out they noticed the issue when their device was meant to play a wake-up alarm

It was found by security researcher Craig Young, who said the issue allows cyber criminals to find your address or make scam messages more convincing.

These include fake calls from the IRS or demands for cash from hackers making phony claims that they have webcam footage of the victim watching pornography.

Google said it plans to fix the security flaw, which leaks your location with an accuracy of up to a few feet, in an update next month.

Mr Young found he could access router location data stored on a Home or Chromecast gadget via a computer connected to the same network.

‘I was actually able to use data extracted from the devices to determine their physical location with astonishing accuracy,’ he wrote in a blog post. 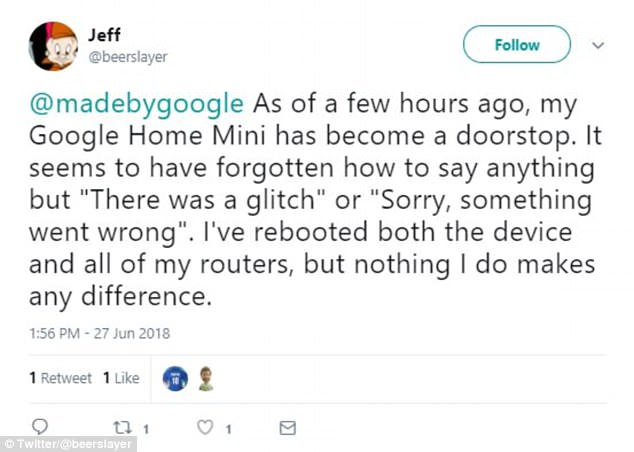 Google has not disclosed the cause of the issue, but said users should reboot their device to get it working again. This didn’t appear to work for some users 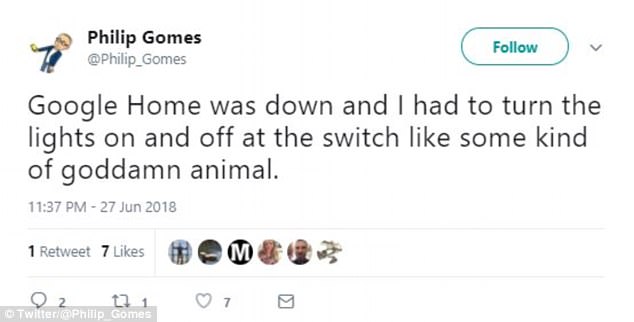 The smart speakers house the artificial intelligence-powered Google Assistant which responds to voice commands and requests. The glitch meant all Google’s interconnected devices were affected

Customers took to Reddit and Twitter to discuss their issues, with the issue appearing to be a global one