British drivers shrugged off record pump prices in the months of May and June and instead filled up with almost as much fuel as they were doing before the pandemic struck, government records show.

New HMRC data confirmed that fuel consumption in these months were almost on par with those in 2019, despite average petrol prices reaching £1.89-a-litre and diesel teetering close to £2 by the end of June.

Pre-Covid levels of consumption also helped to cushion the 5p-a-litre fuel duty cut introduced by former Chancellor Rishi Sunak in March, with tax revenue down just 7.2 per cent in the second quarter of the year compared to the same period three years ago.

A survey by the AA also revealed that only 2 per cent of motorists polled said they had heeded recommendations to ditch their cars in favour of walking and cycling to save money while fuel prices are astronomically high.

What record fuel prices? New government data has shown that fuel consumption in May and June almost returned to pre-pandemic levels – despite record-high petrol and diesel prices

The HMRC data shows that UK petrol demand returned to above 1.4billion litres-a-month in the early summer months – volumes that were last seen in 2019 when petrol cost around £1.31 per litre.

Analysis of the government figures by the AA revealed that 2.875billion litres of petrol was consumed over the course of the two months, which was just 0.3 per cent below that of the same period in 2019.

Likewise, diesel consumption at 4.974billion litres for the same two months was only 0.5 per cent below pre-pandemic volumes.

This is in complete contrast to the US, where government data shows there was a 7.6 per cent decline in summer petrol consumption compared to last year as drivers cut back while prices were high. 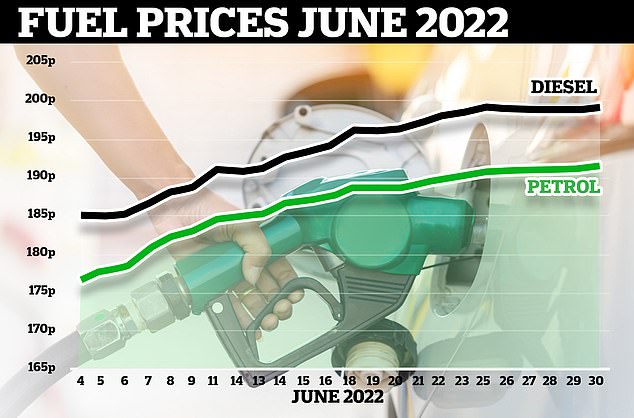 HMRC figures show that fuel consumption in May and June was almost on par with 2019, despite average petrol prices reaching £1.89-a-litre and diesel teetering close to £2

A survey of 15,045 members last month revealed that just 2 per cent of motorists opted to drive less in favour of cycling and walking to avoid the higher cost of filling up.

The study was carried out a week after the average UK petrol pump price hit an all-time high of 191.53p-a-litre on 3 July.

That said, many admitted they did change their driving habits to offset record fuel costs.

Such has been the leap in pump prices that getting another mile out of a gallon of fuel has saved the equivalent of 3p at the pump, according to the motoring group.

With this in mind, three in ten (31 per cent) motorists polled said they adopted fuel-saving driving techniques.

A similar percentage (29 per cent) have been combining trips to cut down on petrol and diesel consumption.

Over a quarter (26 per cent) limited the number of short trips in cars while one in ten (11 per cent) opted to use public transport over their own vehicle for some journeys.

Smaller percentages of drivers said they chose to rack-up debt on credit cards and loans to fill up (5 per cent) or turned to family or friends for help financially or providing lifts (4 per cent).

However, almost a quarter (23 per cent) said they made no changes to their driving habits whatsoever, despite the surging cost of filling up. 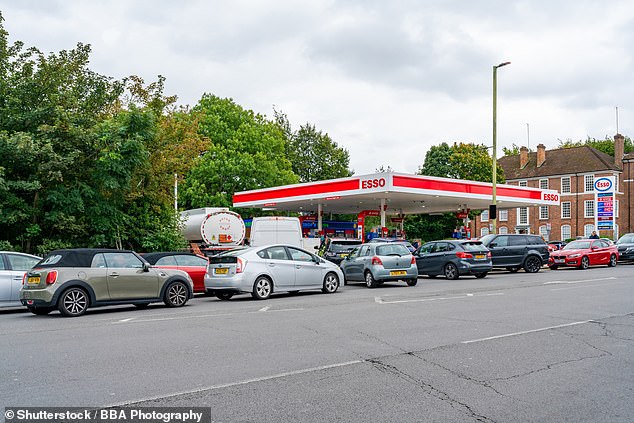 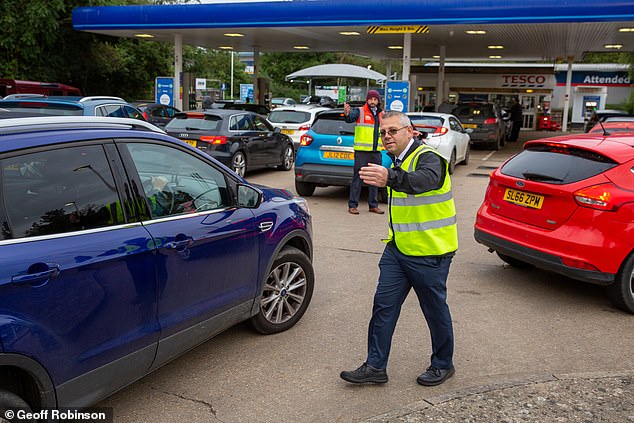 Motorists were forced to learn eco-driving techniques and cut down on shorter car journeys during the period of fuel panic buying, as seen here in October 2021. These measures have been redeployed now that petrol and diesel prices have hit record levels, says the AA

The AA believes that the three bouts of fuel shortages, panic buying and queuing at forecourts between last autumn and spring has meant that UK drivers are better prepared to survive record pump prices than those across the Atlantic.

Luke Bosdet, fuel price spokesman at the AA, said ‘fuel-saving techniques drivers learnt and perfected’ to avoid fuel queues in recent months have been deployed again this summer, with drivers knowing how to be extra savvy to extend periods between fill ups.

‘Government statistics show that, post pandemic, car travel has recovered to 95 per cent of its normal level, and that’s with much more home-working,’ Bosdet added.

‘Cutting out short car journeys and combining others has been the most common way of limiting car use, but not chopping essential trips, such as commutes, shopping and visits to relatives.’