Mexican cartel leader sends his HENCHMEN to hand out basic goods, school supplies and toys to curry favor with local residents after Mexican government offers a $25,000 reward for his arrest

Francisco Rodríguez reportedly oversees a cell called the Señorón Cartel that operates under the Jalisco New Generation Cartel. The state government in Morelos, Mexico, is offering a $25,000 reward for his arrest

A cartel leader tested the loyalty of local residents in the south central Mexican state of Morelos by dispatching his henchmen to deliver basic goods, school supplies, and toys after the state government offered a $25,000 reward for his capture.

Francisco Rodríguez, who is known as ‘El Señorón’ as well as ‘Colombian’ and ‘XL,’ reportedly oversees a cell called the Señorón Cartel that operates under the Jalisco New Generation Cartel.

He is wanted on homicide and organized crime charges by the government of legendary soccer great Cuauhtémoc Blanco.

‘I celebrate the launch of these unprecedented investigation events in the state that strengthen our security strategy,’ Blanco said Monday. ‘Never before has the authority dared to expose the alleged generators of violence with their first and last names.’

The bounty offer was first announced Monday and Rodríguez’s cell responded the next day by attempting to torch a highway billboard that featured a wanted poster with his photo on it.

On Wednesday, Rodríguez reportedly sent out a team of masked men to two villages in the southern area of Morelos.

Photos filtered on social media show rifle-toting cartel members standing in front of a vehicle and giving out plastic bags that featured a white logo with Rodríguez’s nickname and filled with various school supplies.

Women who accompanied the children were also given bags that contained goods. 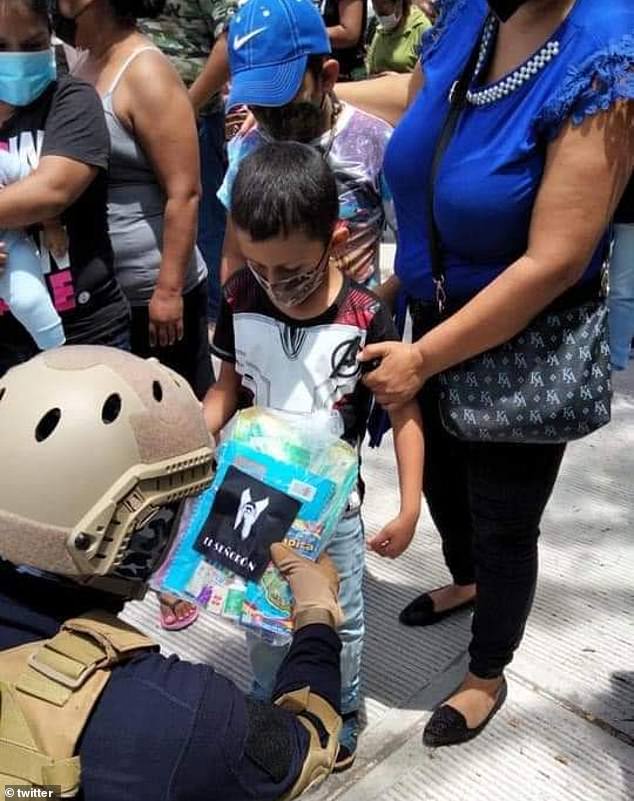 On Wednesday, members of Francisco Rodríguez’s Señorón Cartel, which is reportedly linked to the Jalisco New Generation Cartel, handed out school supplies and basic goods to residents in two villages in the south-central Mexico state of Morelos 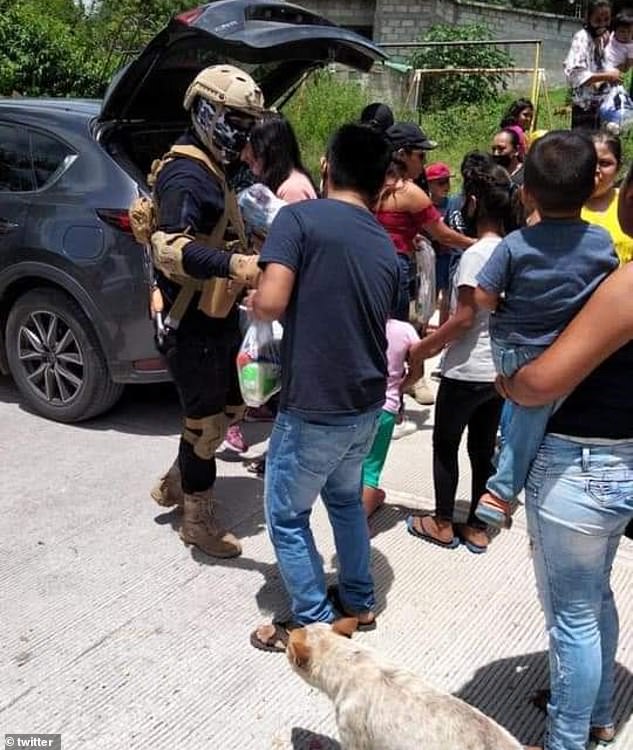 An alleged member of the Señorón Cartel delivers goods to residents in a village in Morelos, Mexico. The Attorney General’s Office for the state of Morelos was looking into the incidents 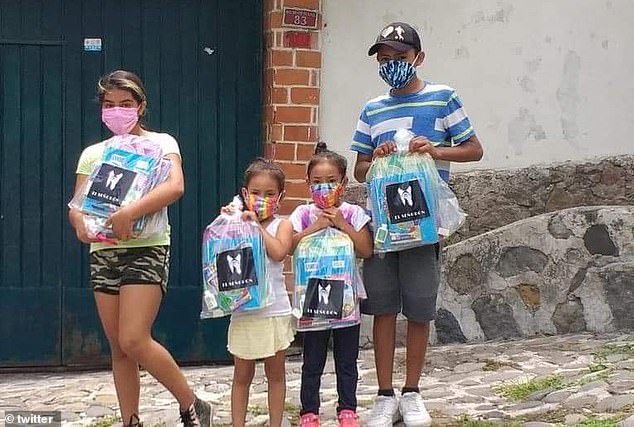 Children in Morelos, Mexico, pose with bags containing school supplies that were gifted to them Wednesday by alleged members of the Señorón Cartel

The Attorney General’s Office for the state of Morelos was looking into the incidents that took place in the villages.

Online news portal Aristegui Noticias obtained a statement reportedly tied to the fugitive drug lord’s criminal work that said, ‘Although the state government has sent official letters and statements that the criminal leader would respond in a violent way, El Señoron responds today by supporting the people and their needs.’ 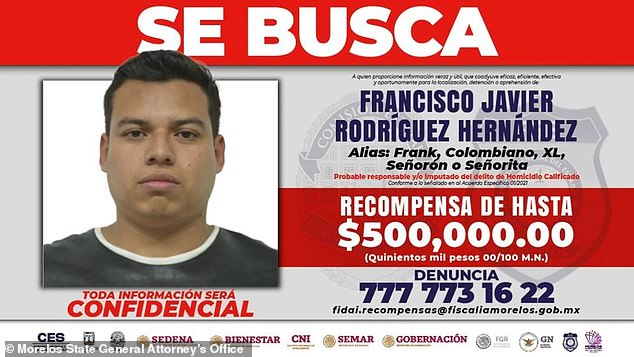 Francisco Rodríguez is accused of homicide and criminal organization charges by the government of legendary soccer great Cuauhtémoc Blanco. 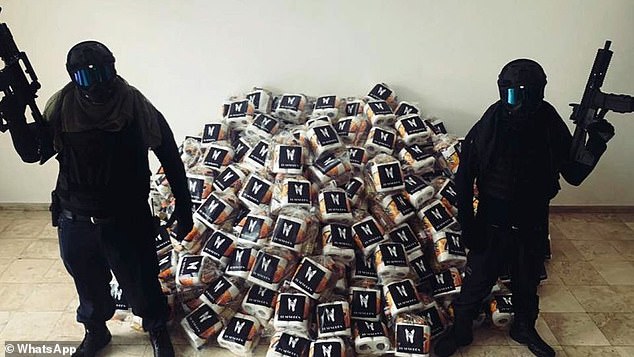 Alleged members of the Señorón Cartel, a cell linked to the Jalisco New Generation Cartel, stand near a pile of goods that were recently handed out to residents in Morelos, Mexico, as the organization sought the support of locals 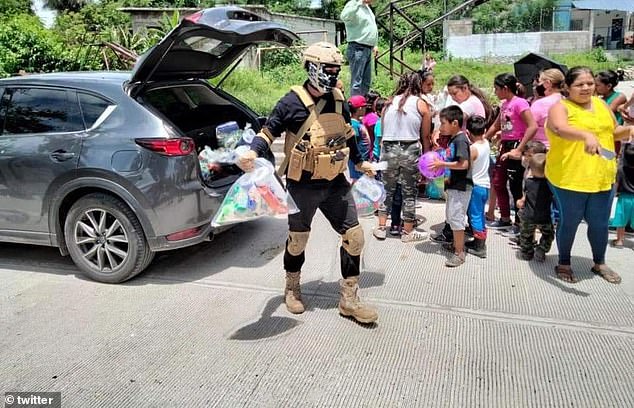 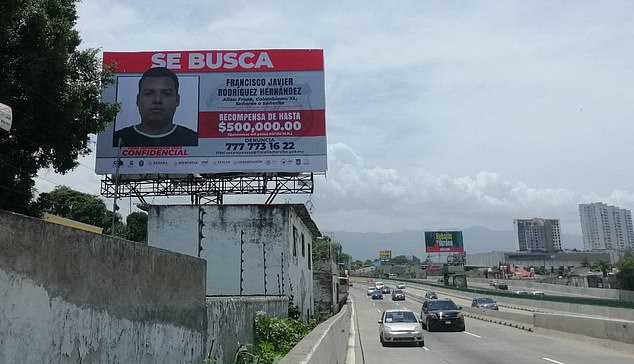 Rodríguez caught the attention of authorities in Morelos following the August 2019 arrest of Santiago Mazari Miranda, who led the Los Rojos criminal enterprise in the states of Guerrero and Morelos.

Rodríguez slowly acquired power and aligned himself with the Jalisco New Generation Cartel.

His latest act fell in line with other cartel leaders who in the sought out the support of the poor in hopes that they don’t turn them over to authorities despite the financial windfall that they could expect.

In December 2020, members of Joaquín ‘El Chapo’ Guzmán’s Sinaloa Cartel held an outdoors bash with a live band. Security forces broke up the part and confiscated seven cars that were being raffled.