FULHAM 1-1 BOURNEMOUTH: The Cottagers cling on to top of Championship one point ahead of Bournemouth

Fulham were banging ever more ferociously on the door and Bournemouth were simply unable to keep it shut.

This engrossing battle of the Championship’s top two ended with honours even. As you were – Fulham top of the table by a single point, Bournemouth second but both odds-on to go up automatically.

Six minutes remained when, after half an hour of intense Fulham pressure, Tom Cairney swung a left-footed cross into the Bournemouth box and defender Tosin Adarabioyo headed home. 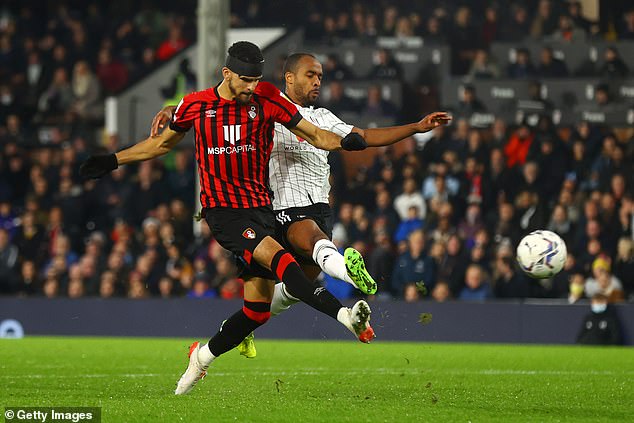 It was the least Fulham deserved and extended their unbeaten run to a 10th game. It denied Scott Parker the perfect return to Craven Cottage after his Bournemouth side scored just seven seconds after half-time.

You’d be hard pressed to find a better executed routine from a kick-off, straight out of Parker’s playbook on the training ground. Philip Billing played a sumptuous left-footed ball that set Dominic Solanke clear.

He outmuscled Denis Odoi and the finish, high into the net, was superb. For a long while, it looked like sending Bournemouth back top. But Adarabioyo had other ideas.

It wasn’t exactly the warmest of welcomes for Parker, who was jeered by some home fans as he made the long walk from the tunnel beneath the Cottage to the away dug-out.

He was the man who guided Fulham into the Premier League the last time but who departed following their relegation back again last season and, as it transpired, turned up at their promotion rival.

It was an open and watchable first-half with both teams remaining true to themselves by committing to quick breaks.

Fulham’s Neeskens Kebano was the stand-out, causing all manner of problems down the left. Such was his potency, both Lewis Cook and Jack Stacey collected yellow cards for crudely fouling him.

Twice Kebano forced Bournemouth goalkeeper Mark Travers into near-post parries inside the opening 15 minutes having stolen in behind and cut onto his right foot.

Bournemouth had good moments of their own. An early shot from Adam Smith tested Marek Rodak, while Solanke, having just had his head bandaged following an accidental collision with Tosin Adarabioyo’s elbow, headed Jack Stacey’s cross wide. 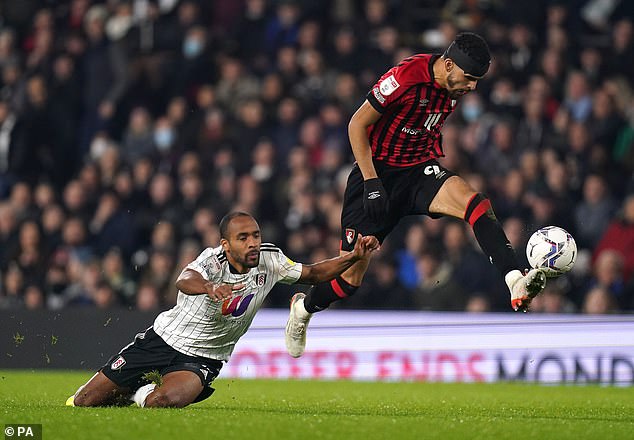 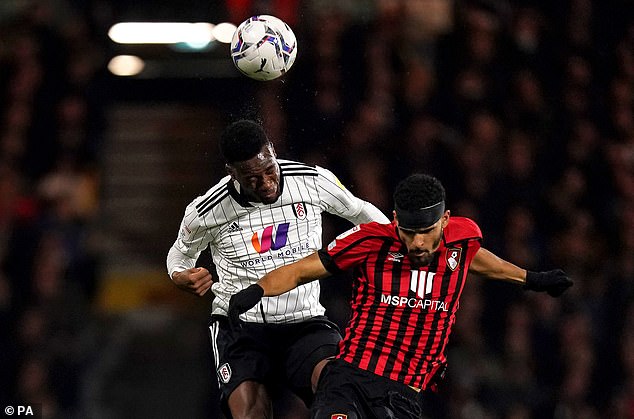 Solanke, who had the best first-half chance for the visitors, battles for the ball with Tosin

Solanke would then roll another shot across goal and wide after showing some fancy footwork on the edge of the Fulham box.

But it was definitely the hosts on top as the half drew towards its conclusion. Bournemouth passed themselves into trouble and Fabio Carvalho’s low cross found Kebano point-blank to the goal but Stacey slide in to make a crucial block.

That was nothing on the heroic defending of captain Steve Cook, however, a minute before the break. Kebano played a pass round the corner to spring Aleksandar Mitrovic free and he cut inside to shoot. 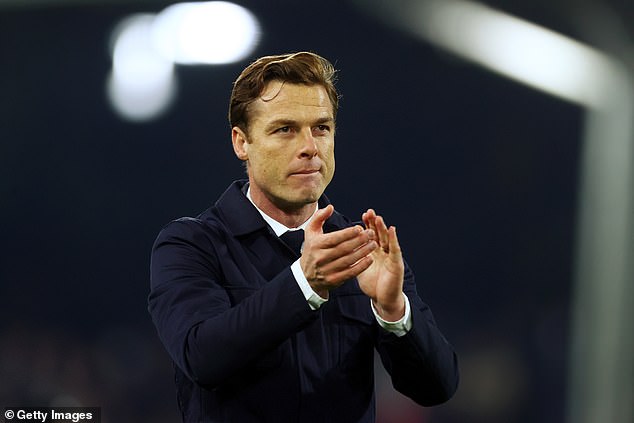 The Serbian’s effort was blocked by Cook, sprawling on the ground, with his face and the Bournemouth defender then took another stinger to the jaw to keep out Carvalho’s follow-up.

But Bournemouth wasted no time in breaking the deadlock within seconds of the restart and Solanke’s 17th goal of the season was one of his best finishes. ‘We are top of the league,’ sang the away fans.

Moments later, the irrepressible Kebano was again forcing Travers to turn the ball around the post after a skilful flick up and strike. Carvalho tested the keeper from a tight angle after Harry Wilson slipped him in.

A powerful Mitrovic header from a prodigious leap just cleared the crossbar as Fulham searched for a route back.

The home crowd grew restless at Travers’ time-wasting from the resulting goal kick. Moving the ball to the other side of his six yard box earned a yellow.

Marco Silva threw on Tom Cairney and Bobby Decordova-Reid to ramp up the pressure. Mitrovic connected with a cross but couldn’t generate enough power on another header.

Kebano was yet again denied by Travers after Cairney slipped the winger through inside the box with a reverse through pass.

And the Bournemouth keeper pulled off another brilliant reaction save to keep out Mitrovic’s header from Cairney’s free-kick with Kebano sending the rebound into the side-netting.

Adarabioyo levelled and Fulham sniffed a winner. There were late corners and free-kick, plus four tense minutes of stoppage time. They arguably warranted a winner but a point was enough to keep them on top. 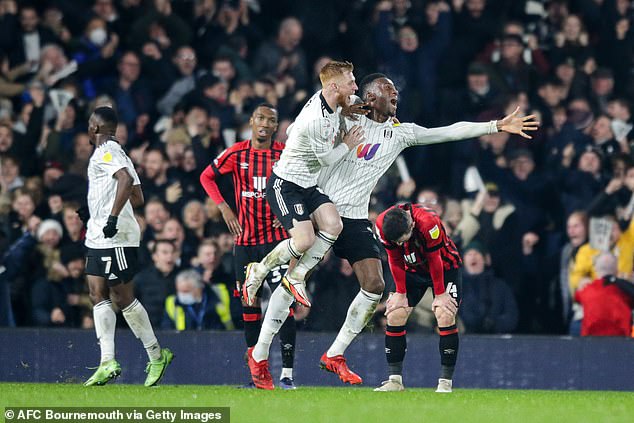