Fully vaccinated healthcare workers were up to 18 TIMES less likely to be infected, two studies find

In one report, just 0.4 percent of healthcare workers in Israel who received both shots of the COVID-19 immunization later tested positive compared to 7.2 percent of unvaccinated employees.

This means healthcare workers who received both doses were 18 times less likely to fall ill.

Meanwhile, in the second study, 1.8 percent of fully vaccinated frontline staff at a hospital in Tennessee contracted the virus in comparison with 8.5 percent of unvaccinated workers, putting the latter group at a 4.7 times greater risk of infection.

The results are in line with the 95 percent efficacy Pfizer and BioNTech reported from their late-stage clinical trial in December 2020 that led to emergency use authorization from the Food and Drug Administration (FDA).

At a hospital in Tel Aviv, Israel, 5,517 healthcare workers, or 82.2% (light blue line), received two doses between December and February and 757, 11.3% (yellow line) were not vaccinated. Of them, 0.4% of the fully vaccinated later tested positive for Covid compared to 7.2% of unvaccinated people 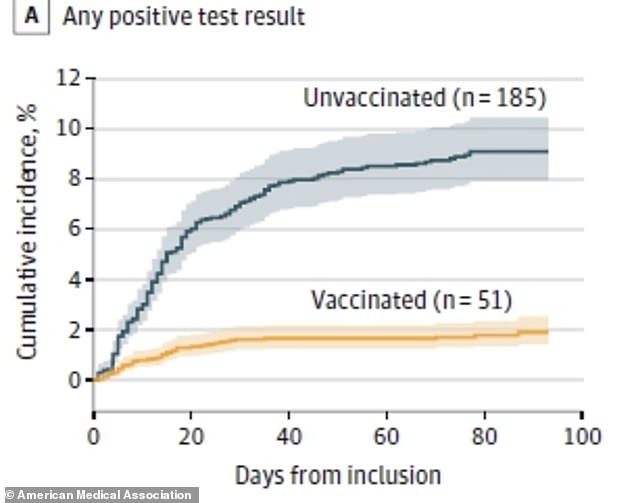 For the study, published in the Journal of the American Medical Association (JAMA), the team from the Tel Aviv Sourasky Medical Center collected data from 6,710 of their employees.

Workers were considered fully vaccinated once it was seven days or later after receiving their final dose.

Eight of the fully vaccinated people who tested positive had symptoms such as cough, fever and shortness of breath compared to 38 of the unvaccinated workers.

The team says this shows that not only is the vaccine effective at blocking illness but, if a person does get sick, they are very unlikely to experience symptoms.

‘In this retrospective cohort study of regularly screened health care workers, vaccination with 2 doses of the [Pfizer] vaccine was associated with significantly lower incidence rates for both symptomatic and asymptomatic SARS-CoV-2 infection,’ the authors wrote.

For the second study, also published in JAMA, the team from St Jude Children’s Research Hospital, Memphis, Tennessee, looked at data from 5,217 employees.

The remaining 2,165 staff members, or 41.5 percent, were unvaccinated.

Similarly to the first study, the majority of fully vaccinated people were asymptomatic at 56.9 percent  compared to 42.7 percent of unimmunized workers.