Heavy-handed councils have been slammed for banning all mourners from services.

The National Association of Funeral Directors (NAFD) has hit out at local authorities in locations including Belfast, Leeds and Bradford that have stopped bereaved families from attending funerals.

Instead several councils are now offering ‘direct cremations’, in which there is no ceremony and mourners are not present.

City of York council for instance has told grieving families they must wait outside the crematorium, while the ‘unattended cremation’ takes place with only a faith officiant allowed inside, before collecting their loved one’s ashes.

But the NAFD said such actions go ‘way beyond government guidance and isn’t in the interests of bereaved families’ urging local authorities to change their minds.

Government guidance states immediate family members should be allowed to attend funerals, but does not give a number.

Kirklees Council, which had banned mourners from attending funerals in Huddersfield and Dewsbury, is now allowing up to 10 mourners to attend

Some have already backed down, including Kirklees Council, which had banned mourners from attending funerals in Huddersfield and Dewsbury in West Yorkshire.

It is now allowing up to 10 mourners to attend funerals at the two sites.

Solihull Council too has increased the number of mourners that can attend funerals. Earlier this week it announced it would be allowing ten people instead of the six previously permitted to attend.

The NAFD has argued that not being able to attend a funeral ‘can have an impact on long-term health and wellbeing’ and said it was pleased some councils were now backtracking on their decision to ban all mourners.

A spokeswoman said: ‘The Government has made it clear that it wants bereaved people to still have that opportunity, and therefore gatherings for funerals – albeit limited to small numbers of immediate family and within the social distancing rules – should be able to continue.

‘We are concerned at the actions of local authorities that are banning all family members from attending. This goes way beyond government guidance and isn’t in the interests of bereaved families.

‘If funeral directors can arrange services within the restrictions, surely crematoria and cemeteries can hold them?

What is the government’s advice for funerals during coronavirus?

Faith leaders and Public Health England have worked together to create guidance for funerals during the ongoing cornavirus crisis.

The guidance is to ensure communities, the funeral industry and the NHS are protected during the pandemic.

Funerals are a concern because Covid-19 is an infectious disease and can be transmitted when large groups of people congregate.

However, with the government say that with certain precautions, funerals should continue to take place.

The guidance includes restricting the number of mourners who attend funerals, so a safe distance of at least three steps can be maintained between individuals.

Only members of the deceased person’s household or close family members should attend funeral, while any individual displaying symptoms of COVID-19 should not attend.

Those who do attend will need to adhere to social distancing at all times, including when travelling to and from the funeral.

Mourners are also strongly advised not to take part in any rituals or practices that bring them into close contact with the body of a person who has died from or with symptoms of COVID-19.

‘Unlike any other life event, witnessing a funeral can’t be deferred and there is no opportunity to repeat it again in the future.

‘Therefore, being able to be there in person, even if as a much smaller group than the family would have wanted, remains an important choice that we believe families must be free to make for as long as possible.’

Gloucester City Council has said only five immediate family members can attend funerals, whereas authorities in Leeds have allowed up to 20 people at burial and graveside services.

Public Health England previously said such services could continue to go ahead but relatives should be wary of the ‘small but real risk’ of the virus transmission from the body of the deceased.

The spokeswoman added: ‘While a ban might seem like a more straightforward solution, there is real risk of this having serious unintended consequences for bereaved families.

‘It may be that the family themselves decide that they do not wish to attend, but it is not for us to deny families that opportunity if there is no reason to do so within the Government’s guidelines.

‘The important thing is to get the balance right to ensure those who have lost a loved one can say goodbye and all those attending, including the mourners, the funeral directors and crematorium or cemetery workers, are not put at greater risk of infection.’

He told the BBC: ‘We’ve carefully reflected on this and have found a way of being able to [permit some mourners at funerals] whilst ensuring social distancing is in place.’

Conservative councillor David Hall had described the decision to ban mourners as ‘cruelty layered on grief’.

‘I hope there will now be time and space for families to say goodbye to their loved ones prayerfully and with dignity,’ he said.

City of York Council has not changed its rules on attendance at funerals however. 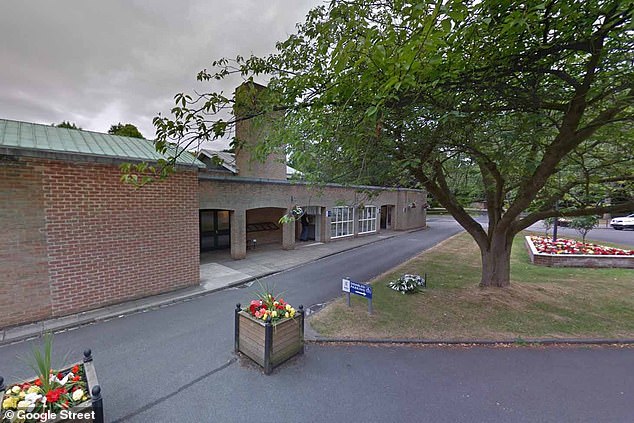 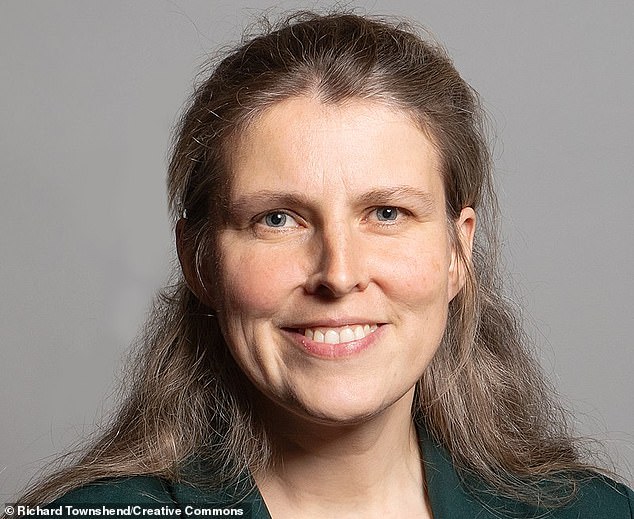 A letter sent to the council by heartbroken resident Kelsey Dobson accuses it of causing ‘severe and detrimental’ damage to families.

‘To refuse wives, husbands, parents and children of the deceased the chance to say goodbye is a severe and detrimental decision that will create further trauma and long-lasting damage to the families that are already grieving a devastating loss,’ she wrote.

‘Nobody is asking for a full funeral. We’re simply asking that immediate family (Spouses, parents and children) can attend their loved one’s funeral, while adhering to social distancing rules,’

The family of Colin Dean, 61, who served in the army in Northern Ireland and Germany for more than 20 years, said all they want to do is give him ‘the final journey’.

His heartbroken widow, Marie, and children Louise and Barry, said: ‘We all have a huge hole in our hearts now that he is gone, and all we want to do is give him the final journey he truly deserves with his wife and children.

‘He was the very best husband and father we could have ever wished for. Whoever he came across he would never fail to leave an impression and lovely memories with his infectious personality; he was life and soul of the party.’

Mr Dean had not suffered from coronavirus. Up to 75 families have been affected by the change so far, which was brought in last Thursday, including those who have lost relatives to coronavirus. 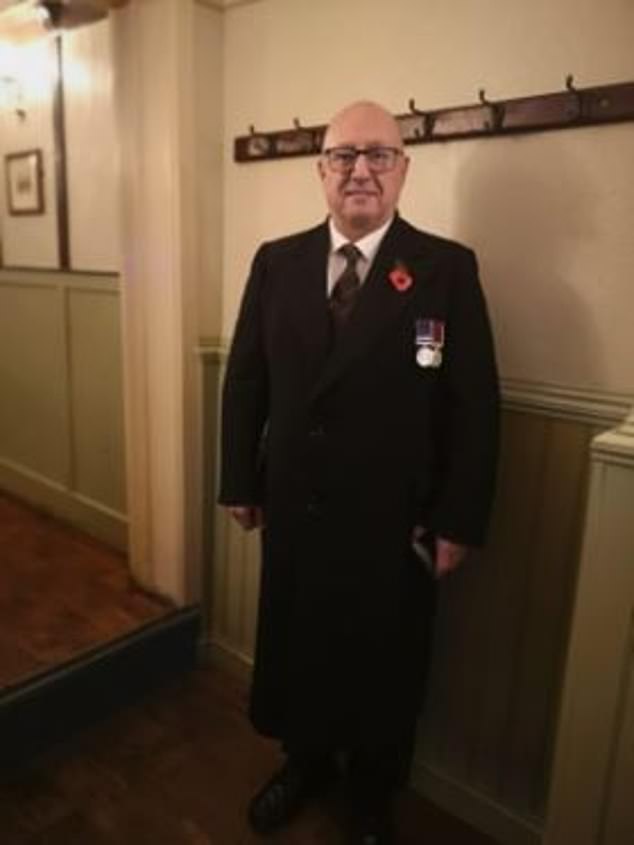 Family of Colin Dean, 61, who served in the army for more than 20 years with postings to Northern Ireland and Germany, said they only wanted to give him a the final journey he ‘truly deserves’

York Central MP Rachael Maskell said the council had not followed government advice, which clearly states funerals should go ahead with social distancing and limiting mourners to close family members.

‘Over the last few days I have been talking to and corresponding with heartbroken constituents who have not only given incredible testimonies of their loved ones who have passed away, but have described the pain and distress caused in not being able to be with them in these very precious final moments,’ she said.

‘Services were cancelled from last Thursday, with just a day’s notice. People are completely distraught.

‘I have been liaising closely with ministers who are in agreement that City of York council have not followed this guidance.

‘One of the ministers had attended York Crematorium and could not understand why the council made this out to be an exceptional case.’

She claimed that the council had incorrectly stated their decision was supported by health leaders and that they were taking the same action as other local authorities.

A petition calling on the council to reverse its decision has so far gathered 3,914 signatures.

Kirklees, Bradford and Leeds councils have also told grieving families they must wait outside the crematorium before collecting their relatives ashes.

‘The government has made it clear that it wants bereaved people to still have the opportunity, and therefore gatherings at funerals can continue – but only if they take place within strict social distancing guidelines and through the limiting of numbers attending,’ they said.

‘Unlike any other life event, witnessing a funeral can’t be deferred and there is no opportunity to repeat it again in the future.

‘Therefore, being able to be there in person, even if as a much smaller group than the family would have wanted, remains an important choice that families must be free to make for as long as possible.’ 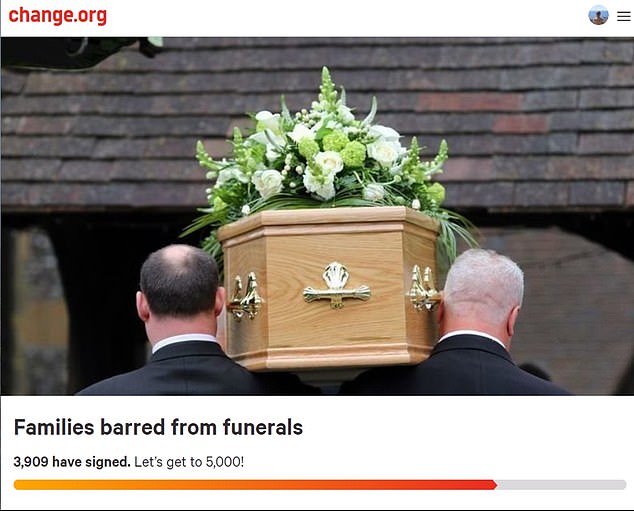 A petition set up to reverse the council’s decision has attracted almost 4,000 signatures

It had initially said mourners would not be allowed to stand outside the crematorium, before relenting on its decision.

They are allowing graveside burials at Fulford Cemetery to continue as planned providing families adhere to social distancing rules.

Cremation is the most popular form of burial in the UK, with burial being vastly more expensive and requiring families to purchase burial plots.

The leader of City of York council, Keith Aspden, said: ‘We know that the necessity of unattended cremation services will cause distress to many grieving people. The Council took the agonising decision extremely reluctantly, but it is a policy that will ultimately save lives.’

The council said that as the crematorium can hold up to 14 services a day, with up to ten or five people at each, this could mean more than 150 people enter and leave the building in one day.

‘It is vital that the number of people visiting the crematoria is kept to a minimum,’ they said, ‘in order to minimise the chances of spreading coronavirus’.