Fungi that turn ants into ZOMBIES have adapted to climate change

A parasitic fungus that turns carpenter ants into ‘zombies’ is learning to adapt to the changing climate.

The fungus is known to infect carpenter ants and cause them to clamp onto hanging vegetation, where they dangle for months to spew spores.

But, researchers have found that zombie ants don’t always bite onto the same part of the plant.

According to a new study, this is because the choice of leaves or twigs boils down to the local climate – and, as conditions continue to change, the fungi have been forced to adapt.

A parasitic fungus that turns carpenter ants into ‘zombies’ is learning to adapt to the changing climate. The fungus is known to infect carpenter ants and cause them to clamp onto hanging vegetation, where they dangle for months to spew spores

‘In tropical areas, zombie ants bite onto leaves, but in temperate areas, they bite twigs or bark,’ says David P. Hughes, associate professor of entomology and biology at Penn State.

Zombie ants – and the species-specific fungi that infect them – can be found all over the world, with the exception of Europe.

In Germany, however, the discovery of a fossilized zombie ant indicates they once lived in the region, and likely went extinct.

Ants become infected by the fungus as spores fall from above and cling to their bodies and use it as a source of nutrition.

The fungus multiplies inside the ant and is eventually able to manipulate its movement, forcing it to climb high into the branches and bite down to clamp on. 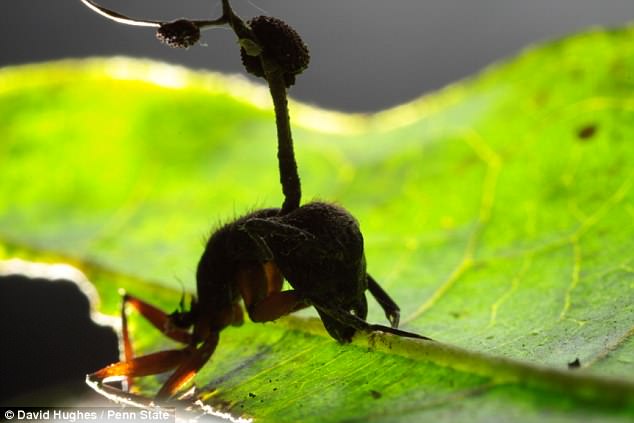 According to a new study, this is because the choice of leaves or twigs boils down to the local climate – and, as conditions continue to change, the fungi have been forced to adapt. Tropical zombie ants, such as the one above, bite onto leaves

Tropical forests provide leaves for them to bite all year around, as they’re mostly evergreen.

Temperate forests, on the other hand, drop their leaves in the fall.

‘In the late summer and early fall there are both leaves and twigs everywhere the ants reside,’ said Raquel G Loreto, postdoctoral scholar in entomology at Penn State.

‘But in temperature areas the trees are deciduous and lose their leaves in the fall. There, the ants bite onto twigs.’ 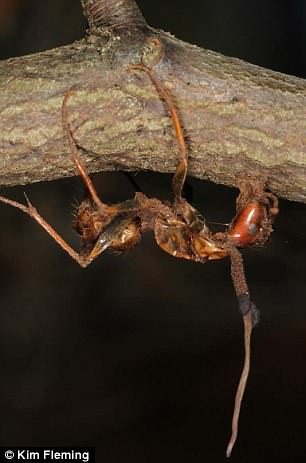 In temperate areas, they bite twigs or bark,’ the researchers explain

The fossil found in Germany is estimated to be about 47 million years old.

At the time, the ant bit onto a leaf in the wet evergreen forest.

As the climate has changed over the several millennia and temperate forests grew, the fungi evolved to hold onto twigs or bark.

‘Some of the ants do not simply bite the twigs, but wrap their back legs around the twig and hold on,’ said Loreto.

‘They probably do this because biting twigs is not enough to hold them on.’

In the study, the researchers investigated three separate areas to see how the zombie ants’ behaviour differed.

While leaf biting was the ancestral trait, the researchers determined that twig biting convergently evolved at different times and different places around the world – North America and Japan.

HOW DOES FUNGUS TURN ANTS INTO ‘ZOMBIES’?

Researchers at Penn State University suggest that the zombie ant fungus surrounds and invades muscle fibres throughout the ant’s body, allowing it to control the host’s behaviour.

In a recent study, the researchers infected ants with the parasite or a general fungal pathogen.

The team then created 3D visualisations to understand how the fungi moved inside the ants.

Using AI and machine-learning algorithms, the researcher analysed the images, and found that the parasite cells had spread through virtually all regions of the ants, including the head, thorax, abdomen and legs.

Many of the fungal cells were connected, suggesting they formed a network to control the ant’s behaviour collectively.

Dr David Hughes, senior author of the study, said: ‘We found that a high percentage of the cells in a host were fungal cells.

‘In essence, these manipulated animals were a fungus in ants’ clothing.’

Despite being found in most regions in the ant, the researchers found no fungal cells inside the brain.

‘We can estimate that these changes occurred between 40 and 20 million years ago,’ said Hughes.

‘However, because of the scarcity of zombie ant fossils, we can’t be any more specific than that at the moment.’

‘What is remarkable here is that we have shown that the complex manipulation of an animal by microbe has responded to selection pressure the climate imposes on animals and plants,’ Hughes says.

‘That was a cool finding that really excited us.’