Dr Anthony Fauci has again claimed that people who criticize him for his COVID-19 ‘flip-flopping’ are actually condemning science itself.

The White House coronavirus tsar struck a cranky tone in an upcoming New York Times podcast interview, where he claimed any changes in his recommendations were solely based on evolving data as the COVID crisis continued.

Fauci said: ‘It is essential as a scientist that you evolve your opinion and your recommendations based on the data as it evolves…

‘And that’s the reason why I say people who then criticize me about that are actually criticizing science.

‘[T]he people who are giving the ad hominems are saying, “Ah, Fauci misled us. First he said no masks, then he said masks.”

‘Well, let me give you a flash. That’s the way science works. You work with the data you have at the time.’

Fauci, 80, initially told Americans not to worry about wearing face masks early in the COVID crisis in spring 2020. He later became a huge supporter of public masking, and claimed his early dismissal of face coverings had been to try and conserve then-tight supplies for medical staff.

Dr Anthony Fauci, head of the National Institute of Allergy and Infectious Diseases, spoke to podcast host Kara Swisher of The New York Times for her show Sway, which airs on Monday

The veteran immunologist – who has served as director of the National Institutes of Health since 1984 – has also faced criticism for initially steering conversation away from claims that COVID may have leaked from a Wuhan virus lab.

He now says he is open to that theory.

Fauci said that he was unbothered by both the praise and condemnation that has come as a result of him being the de-facto ‘face’ of the US COVID crisis, but said he was shocked to have received criticism likening him to Adolf Hitler.

‘It gets preposterous, and the thing that bothers you most of all is the impact it has on your family,’ Fauci continued.

‘I mean, getting death threats and getting your daughters and your wife threatened with obscene notes and threatening notes is not fun. So I can’t say that doesn’t bother me.

‘The more extreme they get, the more obvious how political it is … “Fauci has blood in his hands.’ Are you kidding me? … Here’s a guy whose entire life has been devoted to saving lives, and now you’re telling me he’s like Hitler? You know, come on, folks. Get real.’ 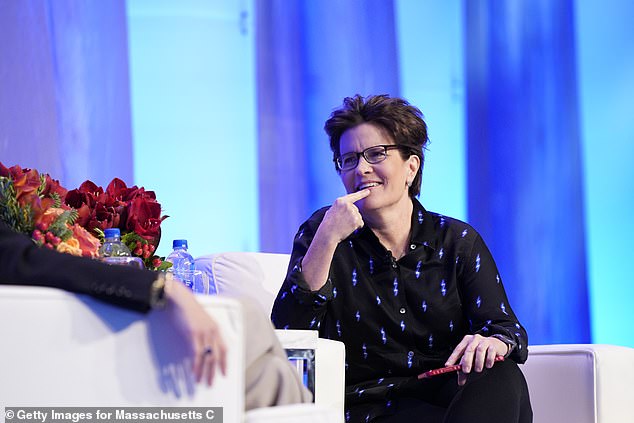 Republican critics are calling for Fauci, who is now Joe Biden’s chief medical advisor, to be fired.

Retailers were doing a roaring trade during the pandemic in deities with Fauci’s face on them, and candles fit for a Fauci shrine.

And Brad Pitt took heed of Fauci’s joking remark that he’d like the Hollywood star to play him in a movie of his life, appearing as the doctor on a Saturday Night Live sketch.

The feeling was equally strong on the other side, however, and in April 2020 he was given bodyguards. 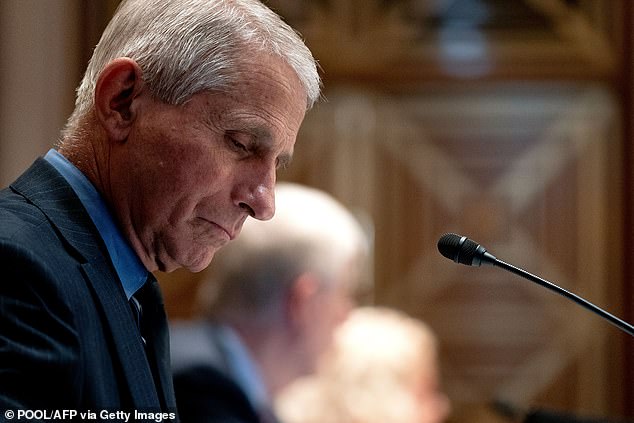 Fauci, seen at a May 26 hearing in Congress to discuss the budget for his NIAID, has spent four decades as the nation’s top public health expert

Fauci has previously attempted to explain that his recommendations evolved as the scientific thinking changed – leading to furious attacks from conservative pundits.

Earlier this month they laid into him, sarcastically branding him King Tony Fauci, after the immunologist suggested that attacks on him were ‘attacks on science.’

‘The man does think he’s some kind of deity,’ said Laura Ingraham on Fox News’ The Ingraham Angle.

‘His argument is essentially… ‘I am the science! I am the truth!’ she scoffed.

‘It’s not Fauci who just believes he is immune. You are not allowed to say anything negative about him or the culture revolution.’

Sean Hannity, likewise seized on Fauci’s remarks, saying that he ‘got really p*ssed off, very defensive, even indignant, trying to claim any criticism of him is a criticism of science.’

Fauci’s remarks seemingly equating himself with science also unleashed a wave of scorn on Twitter, with critics on the right calling the veteran doctor a ‘petty tyrant’ with a God complex.

The doctor’s comments and the ensuing firestorm came after Republican Sens. Marsha Blackburn, Marco Rubio and Tom Cotton called on Fauci to resign, or face termination, arguing that he misled the American people on the origins of COVID-19 and the use of face masks at the beginning of the coronavirus pandemic.

‘It’s very dangerous, because a lot of what you’re seeing as attacks on me, quite frankly, are attacks on science because all of the things that I have spoken about consistently from the very beginning have been fundamentally based on science,’ Fauci told NBC’s Chuck Todd.

‘Sometimes those things were inconvenient truths for people, and there was pushback against me.

‘So if you are trying to get at me as a public health official, you’re really attacking not only Dr. Anthony Fauci, you are attacking science.

‘And anybody that looks at what is going on clearly sees that,’ Fauci concluded.

‘You have to be asleep not to see that.

‘Science and the truth are being attacked.’

The comments come as Republican legislators ramp up their attacks against the director of the NIAID after Buzzfeed News published thousands of his emails since the coronavirus pandemic began last year, which critics claim shows him flip-flopping on the issues.

In one email, he told a woman who was traveling in late February 2020 that she does not need to wear a mask.

‘The typical mask you buy in the drug store is not really effective in keeping out the virus, which is small enough to pass through the material. It might, however, provide some slight benefit in keep out gross droplets if someone coughs or sneezes on you.’

‘I do not recommend that you wear a mask, particularly since you are going to a very low-risk location.’ 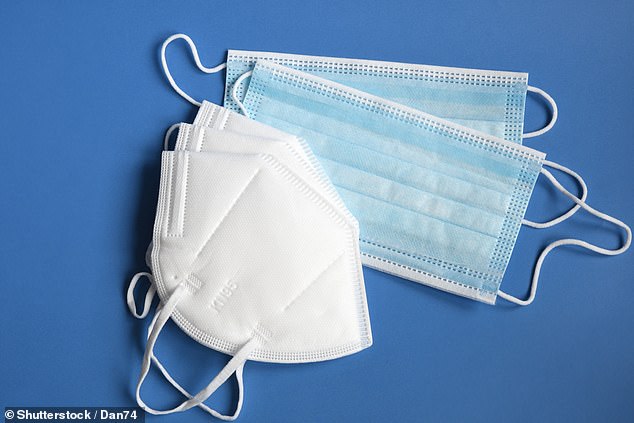 The comments come amid claims that Fauci flip-flopped on his stance on masks, claiming in an email to a woman in February 2020 that they are ‘not really effective in keeping out the virus’

In his June 9 NBC interview, Fauci said he was acting on the information he had at the time, when officials believed there was a mask shortage, people were not sure masks would work outside of a hospital setting and were unaware COVID-19 could be spread through asymptomatic carriers.

Fauci said the ‘entire CDC was saying the same thing’ at the time, but eventually data came back and showed that mask-wearing helped reduce the spread and more than half of the coronavirus cases in the United States were being spread though asymptomatic contact.

‘That’s when we said we’ve got to get people to wear masks,’ he said.

‘You’ve got to be guided by the science and the current data,’ Fauci said, noting: ‘People want to fire me or put me in jail for what I’ve done – namely follow the science. It’s preposterous.’

Fauci has also come under scrutiny for a $830,000 grant the NIAID gave the Wuhan Institute of Virology, to study the risk that bat coronaviruses could infect humans.

Fauci defended the grant in a congressional hearing last month, saying the money was meant to be used to ‘study the animal-human interface, to do surveillance and to determine if these bat viruses were even capable of’ infecting humans.

He cited comments made by Francis Collins, director of the National Institute of Health, who said that the American tax dollars that went to the Wuhan lab – where many officials now believe COVID-19 originated – was not approved for gain-of-function research, which is research that involves modifying a virus to make it more infectious among humans.

But, Collins said, the National Institute of Health would not be aware of other experiments being done at the lab. 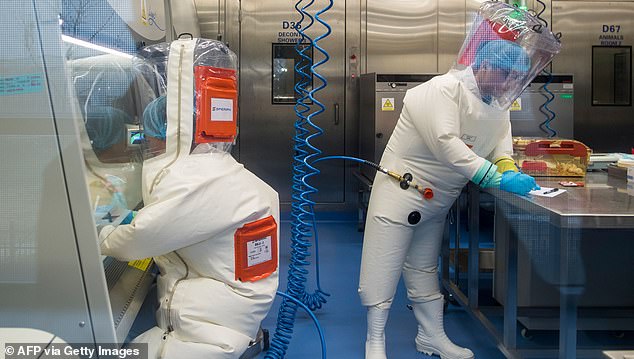 The Wuhan Institute of Virology is one of only a handful in the world that is cleared to handle Class 4 pathogens — dangerous viruses that pose a high risk of person-to-person transmission. Recently, Fauci admitted granting the lab money to study the risk that bat coronaviruses could infect humans

In one of the leaked emails, it appeared Fauci was warned as early as January 31 by another infectious disease expert, Kristian G. Andersen, that the virus could have leaked from the lab and been altered.

In the email, Andersen referenced a Science magazine article about how researchers around the world were racing to share ‘full sequences of the virus from patients’ to understand how it related to viruses found in animals.

‘The unusual features of the virus make up a really small part of the genome (<0.1%) so one has to look really closely at all the sequences to see that some of the features (potentially) look engineered,’ he wrote.

At the time, the lab leak hypothesis was largely dismissed by many experts.

It has recently gained traction.