Drivers of older, more polluting cars face paying a new £12.50 fee to enter the centre of the capital after the ultra-low emission zone (Ulez) came into force today.

But many drivers were left unimpressed, with one describing it as ‘another tax on Londoners that can’t afford a new vehicle’ and another labelling it a ‘stealth tax’.

A sign at Tower Hill in London warns drivers about the £12.50-a-day Ulez fee introduced today 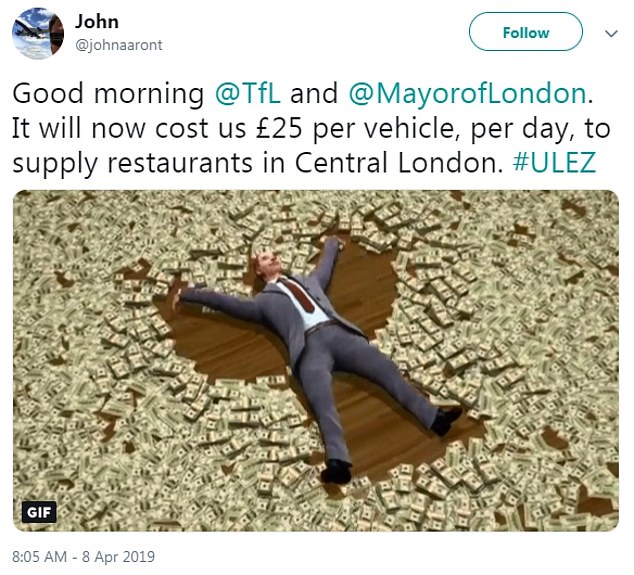 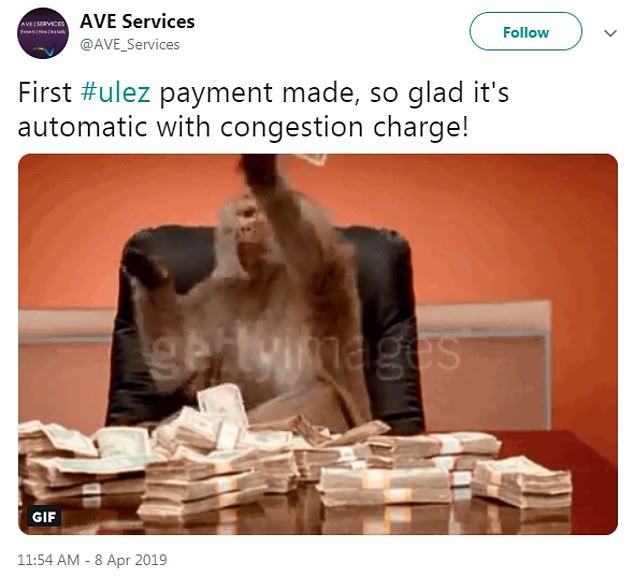 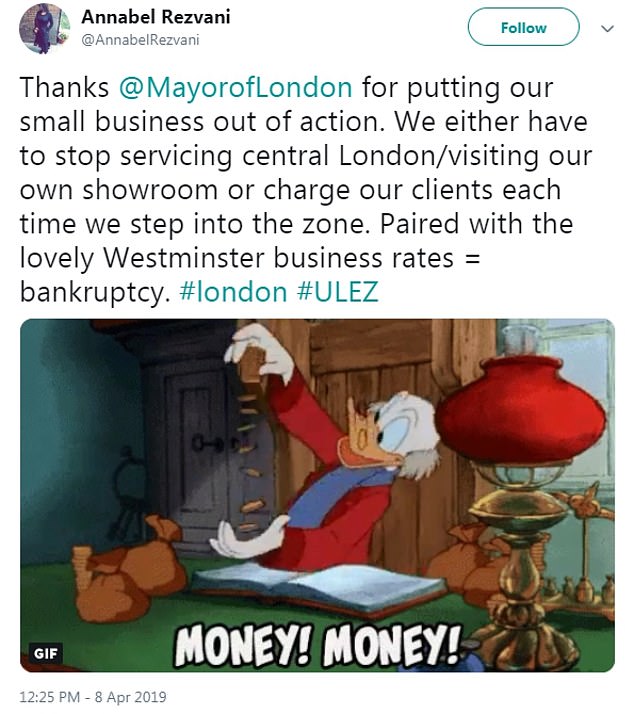 Another Twitter user said it was ‘typical London punishing the working class such as builders and electricians etc who actually keep the city running with their work’.

However, Mr Khan said the scheme is being brought in because thousands of Londoners are dying early every year as a result of toxic air, with an increased risk of cancer, asthma, dementia and stroke.

He claimed the Ulez will ‘help clean our air and reduce harmful road transport emissions’.

Mr Khan commissioned a study by King’s College London and Imperial College London which found that poor air quality leads to about 1,000 London hospital admissions for asthma and serious lung conditions every year.

He said: ‘As someone who developed adult-onset asthma over the last few years, I know from personal experience that London’s toxic air is damaging people’s health. 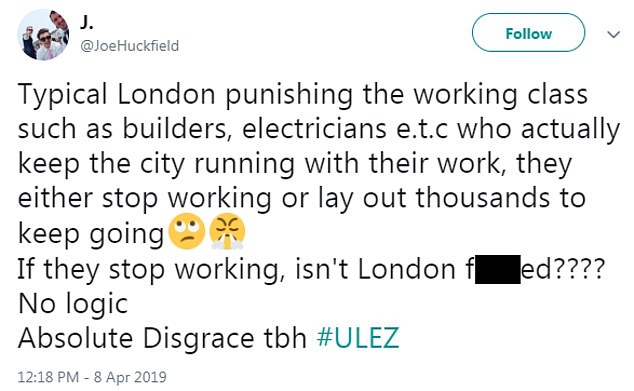 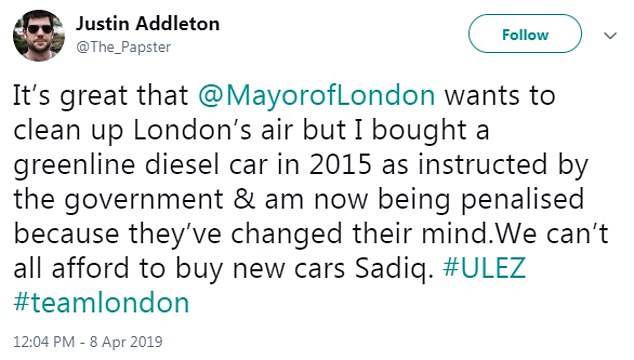 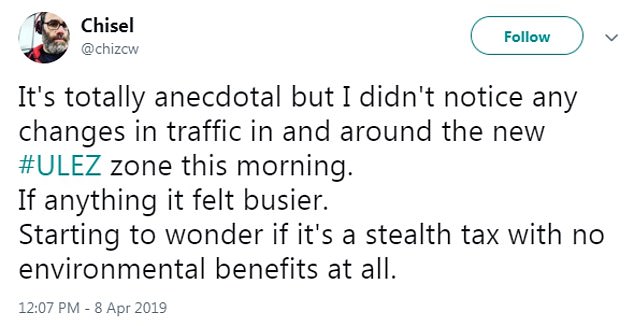 ‘This study is a stark reminder that air pollution disproportionately affects the most vulnerable Londoners and I’m doing everything in my power to protect children, the elderly and those with respiratory conditions from our filthy air.’

The ultra-low emission zone (Ulez) has been introduced in London. Here are some of the key questions around the scheme:

What is it?  The Ulez is a way of charging vehicles which emit the most nitrogen oxide for entering parts of London.

When does it apply?  The daily charge runs from midnight to midnight every day.

Where is it happening?  The scheme is initially within the same area as the congestion charging zone, before being expanded to within the North and South Circular roads from October 2021.

How much does it cost to enter the zone with an older vehicle?  It costs £12.50 for most vehicle types, including cars, motorcycles and vans. Heavier vehicles such as lorries, buses and coaches are liable for a £100 charge.

How can I avoid the charge?  To be exempt from the Ulez charge, petrol cars, vans and minibuses must meet the Euro 4 emissions standard and diesels must meet Euro 6. That means the oldest cars that can be driven in central London without paying are roughly a four-year-old diesel model or a 13-year-old petrol model.

What if I don’t know my vehicle’s emissions standard?  Drivers can check whether their vehicle is liable for a charge by entering its registration on the Transport for London website.

Why was Ulez introduced?  London mayor Sadiq Khan says the scheme will improve the capital’s air quality, which he says is responsible for thousands of premature deaths and other serious conditions.

Has there been any opposition to the scheme?  Conservatives on the London Assembly claim Mr Khan’s decision to introduce the scheme earlier than planned could catch out some motorists – particularly those from the poorest households – who have not already upgraded their vehicle to a newer model. They also warn that expanding the zone to the whole of inner London will not effectively tackle pollution and will affect people and businesses in areas with low pollution.

The Ulez initially covers the same area as the congestion charge zone, but will be extended to the whole of inner London within the North and South Circular roads from October 2021.

Charges apply at all times and are on top of the congestion charge, which is £11.50 between 7am and 6pm on weekdays.

All vehicle types apart from black taxis are liable for the Ulez charge unless they meet certain emissions standards or exemptions.

City Hall believes thousands of drivers have upgraded to newer, cleaner vehicles or changed their journey patterns ahead of the introduction of the Ulez.

Its figures show the proportion of vehicles not compliant with the required emissions standards fell from 61 per cent in February 2017 to 39 per cent last month.

The Ulez was announced by former London mayor Boris Johnson, but his successor Mr Khan brought its start date forward and decided on the 2021 extension.

There has been concern that poorer motorists, small businesses and charities will be unfairly hit by the charge as they are less able to afford to upgrade their vehicles.

London director of business organisation the CBI, Eddie Curzon, described the Ulez as a ‘really positive step’ but warned that ‘smaller firms can struggle to afford the switch to low-emission vehicles’.

He said: ‘To make a success of the Ulez, it is crucial that City Hall works with firms to help them take advantage of new technologies and support them, where required, to accelerate the take-up of low emission vehicles.’

He added: ‘The damage caused by the early introduction of the central Ulez will pale into insignificance compared to the impact of its extension to the North and South Circulars in 2021.

‘This punitive move will hit the very poorest Londoners hardest.’

City Hall said Transport for London is running a scrappage scheme to help the smallest businesses and charities switch to cleaner vehicles.

It also noted that people in London’s most deprived areas are more likely to suffer from poor air quality and are least likely to own a car.

What are towns and cities outside London doing to tackle emissions?

A ‘patchwork approach’ to pollution charging will be ‘bewildering’ for drivers, a motoring research charity has warned.

Analysis by the RAC Foundation found that local authorities across Britain are planning to introduce schemes with a variety of rules, following the launch of the ultra-low emission zone in London.

The measures will mean certain vehicles will be liable for a charge in some towns and cities but not others. Here are some of the plans to improve air quality in Britain, based on analysis by the charity:

Bath: Plan for higher emission vehicles except cars to be charged to drive in the city centre from late 2020. Non-compliant buses, coaches and lorries will be charged £100 a day, while taxis, minicabs, vans and minibuses will pay £9.

Greater Manchester: Proposal that from 2021 older taxis, minicabs, vans and minibuses will pay £7.50 per day, while buses, coaches and lorries will pay £100.

Leeds: A 24/7 clean air zone has been approved for January 2020. This will see the most polluting taxis, minicabs and vans facing a £12.50 daily fee, while buses, coaches and lorries will pay £50.

Sheffield: A low emission zone has been proposed for older taxis, minicabs, vans and minibuses, but no start date, hours of operation or daily charge has been confirmed.

Elsewhere: There are restrictions on older buses in Oxford, while Brighton and York will introduce similar schemes in 2020. Aberdeen, Edinburgh and Dundee have all committed to having low emission zones by 2021.

Other places including Coventry, Derby, Leicester, Liverpool and Tyneside are at various stages of deciding or implementing measures to improve air quality.