Animal activists have stormed a shopping centre to shame families for posing for photographs with two Australian red deer at a Christmas parade.

Brisbane has used live deer for its Christmas events for years and this week saw the adorable duo return for the much-loved Santa’s Stable at Reddacliff Place.

But while families flocked to the event, angry animal rights protesters surrounded the shopping complex, screaming for the ‘exploitation’ to end.

‘Our Christmas celebrations would be just as fantastic without using two deer,’ they said.

Other protesters wore Santa hats as they held signs which read: ‘Animals don’t belong here’ and ‘Animals are not ours to use’.

Shoppers could be seen casually strolling past as the protesters continued to shout.

The protest comes after PETA successfully stopped deer from being used in the Christmas Parade this year.

But the animals rights group is still urging Brisbane City Council to cancel plans to feature live animals in all of its Christmas displays.

‘Christmas attractions that use live animals completely go against the merry spirit of the season,’ PETA spokesperson Emily Rice said.

‘Animals are living, feeling individuals, not props, and they shouldn’t be made to suffer for our entertainment.’ 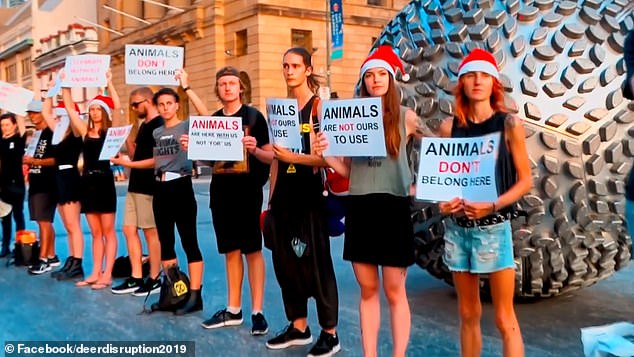 Protesters wore Santa hats as they held signs which read: ‘Animals don’t belong here’ and ‘Animals are not ours to use’ 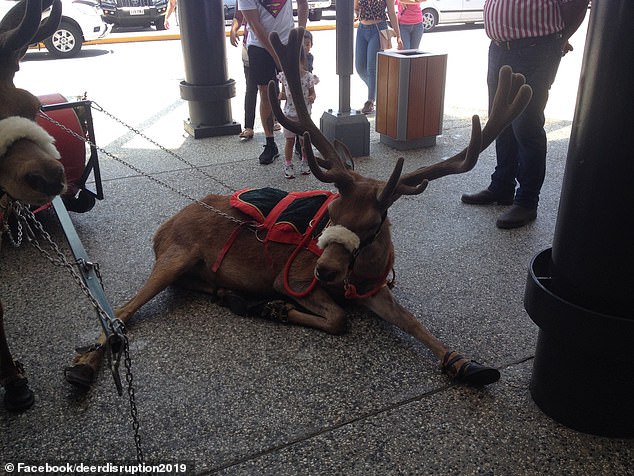 Deer were not included in the Christmas Parade this year after PETA petitioned for that to end, however, they were used in the Santa’s Stable