Hot under the collar about Democratic investigations after Robert Mueller’s testimony, President Donald Trump called to investigate President Barack Obama and Hillary Clinton and even complained about the air conditioning system his predecessor installed.

President Donald Trump capped off a week where Mueller said his report did not exonerate Trump by tearing into Democratic ‘clowns’ who who are gearing up their investigations and say they are already conducting an impeachment investigation.

Trump, 73, even blamed Obama for ruining the White House air conditioning system, which he says runs hot and cold and is never comfortable.

Speaking in the Oval Office Friday afternoon, he called to investigate President Obama’s lucrative book deal and the Clinton Foundation, and later in his remarks complained that Obama installed an air-conditioning system that was always ‘freezing or hot.’

Trump made his remarks as Democrats on the House Judiciary Committee acknowledged they were conducting an impeachment investigation and filed a new action to force the release of secret grand jury materials from the Mueller probe.

CAN SOMEBODY TURN UP THE AC IN HERE?  President Donald Trump pauses while announcing an agreement with Guatemala regarding people seeking asylum in the Oval Office of the White House July 26

‘We want to find out what happened with the last Democrat president. Let’s look into Obama the way they’ve looked at me. From Day One they’ve looked into everything that they’ve done. They could look into the book deal that president Obama made. Let’s subpoena all of his records,’ Trump complained.

‘Let’s subpoena all of the records having to do with Hillary Clinton and all of the nonsense that went on with Clinton and her foundation and everything else. We could do that all day long,’ Trump continued on his tear.

Trump during his campaign called to investigate Clinton, and his crowds often chanted to ‘lock her up.’ Former FBI Director James Comey announced in July 2016 that Clinton would not be charged for use of a private email system housed in a home server, though he chided her for carelessness. Trump cited that performance as one of the reasons he fired Comey. 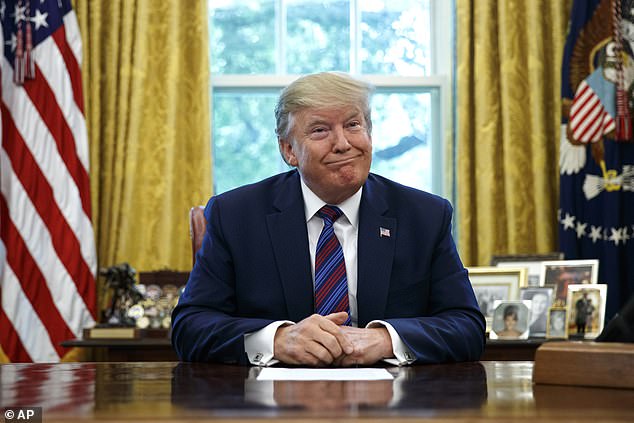 HOT UNDER THE COLLAR: Trump tore into Democrats investigating him as well as Barack Obama and Hillary Clinton Friday 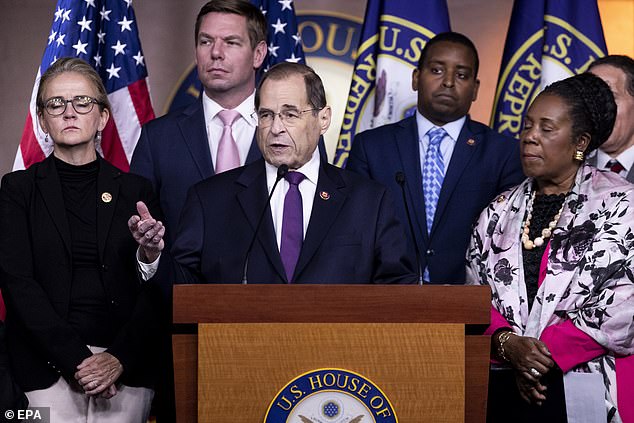 ‘What’s going on – I think too much has been made of the phrase ‘an impeachment inquiry,’ said Judiciary Chairman Rep. Jerold Nadler, who appeared with fellow Democrats Friday

Trump explained why he was staying in Washington rather than going to one of his golf clubs this weekend. He spoke of the disruption of a presidential visit to Manhattan, then even tore into an Obama White House renovation that he complains is very uncomfortable.

‘They do a lot of work in the White House for instance the Obama administration worked out a brand new air conditioning system for the West Wing, and it was so good before they did the system,’ he said.

‘Now that they did the system – it’s freezing or hot,’ he said.

Top House Judiciary Committee Democrats proclaimed Friday that they are already in an impeachment ‘investigation’ – underscoring how the move to gather materials for potentially removing President Trump from office can proceed even without a formal vote.

The statements, though semantic in nature, revealed how Democrats are advancing wide-ranging probes of Trump despite a party split over whether opening a formal inquiry into impeaching Trump is the best way forward.

‘A lot of people believe we’ve been in an impeachment inquiry ever since we started looking into potential high crimes and misdemeanors and misconduct of the executive branch,’ said Maryland Rep. Jamie Raskin, a subcommittee chair.

House Judiciary Chairman Jerold Nadler addressed the issue at a press conference Friday, where he announced Democrats were taking court action to force the release of secret Grand Jury material that undergirds the Mueller report.

‘What’s going on – I think too much has been made of the phrase ‘an impeachment inquiry,’ said Nadler. ‘We are doing what our court filing says we are doing. We are using our full Article I powers to investigate the conduct of the president and to consider what remedies there are. Among other things, we will consider obviously are whether to recommend articles of impeachment. We may not do that we may do that,’ Nadler said.

He added: ‘We are continuing an investigation of the president’s malfeasances. And we will consider what we have to consider, including whether we should recommend articles of impeachment to the House. That’s the job of our committee.’

Nadler mentioned areas of inquiry as including Trump’s finances, as well as former Trump campaign chair Paul Manafort passing on poll information to Kontsantin Kilimnick, who has ties to Russian intelligence. 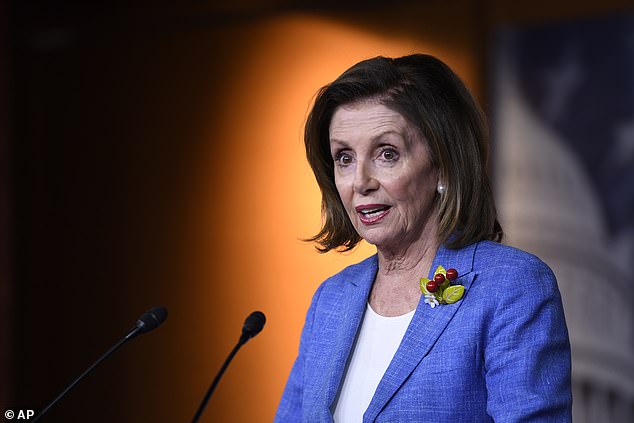 House Speaker Nancy Pelosi of Calif., has cautioned about the risks of impeachment 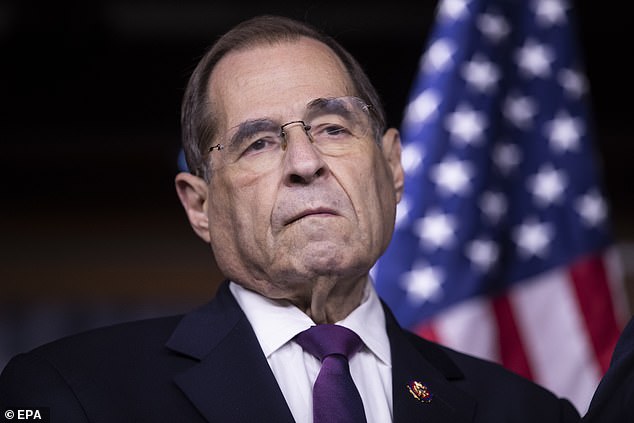 We are using our full Article One powers to investigate the conduct of the president and to consider what remedies there are,’ said Rep. Jerold Nadler of New York 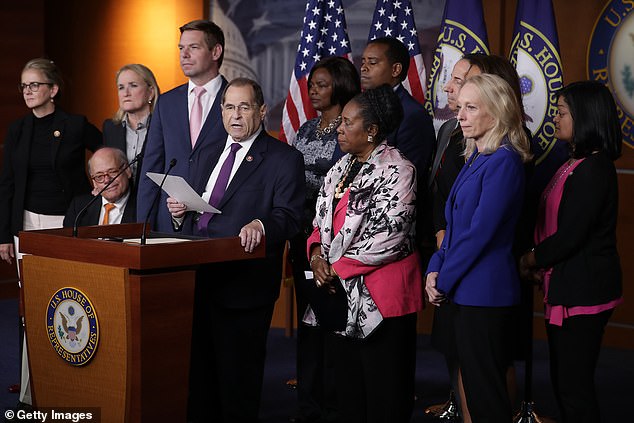 House Judiciary Committee Chairman Jerrold Nadler (D-NY) (C) and fellow Democratic members of the committee hold a news conference about this week’s testimony of former special counsel Robert Mueller July 26, 2019 in Washington, DC. Nadler said that the hearing was an ‘inflection point,’ because Mueller testified that President Donald Trump’s 2016 campaign welcomed assistance from Russians and that Trump ‘was not exonerated’

The comments came after the number of Democrats backing the opening of an impeachment inquiry hit 100, with six additions since Mueller’s testimony.

Not long after he spoke, Nadler’s committee turned in a court filing for force the release of Mueller grand jury materials. The filing mentioned the word ‘impeach’ or ‘impeachment’ 81 times, and cited the panel’s judicial inquiry as a justification for getting the information.

The move also followed halting testimony by Mueller this week that nevertheless stated that he had not exonerated Trump, that the decision not to charge him with a crime was informed by guidelines insulating a sitting president, and acknowledgement that he could be prosecuted once out of office.

Nadler also defended Mueller, 74, calling him ‘a man of honor and integrity.’ He said even if he  ‘seemed older than some remembered him his work is somehow diminished.’

Speaker Nancy Pelosi on Friday denied she was playing for time by holding out on starting impeachment proceedings.

‘No, I’m not trying to run out the clock,’ she said during a press conference on Capitol Hill.

‘We will proceed when we have what we need to proceed. Not one day sooner. And everybody has the liberty and the luxury to espouse their own position and to criticize me for trying to go down the path in the most determined positive way,’ she said.

Pelosi also doubled down on waiting as the 100th lawmaker announced it was time to begin impeachment proceedings, according to a count by NPR.

Democratic Representative Annie Kuster announced her support for impeaching the president on Friday.

‘I support a formal inquiry to determine whether or not the President’s conduct warrants bringing articles of impeachment,’ she tweeted.