Furious woman smashes LAPTOP onto her boyfriend’s head on plane

A furious woman left passengers on a flight in shock as she smashed a laptop over her boyfriend’s head, after accusing him of ‘looking at another woman’.

A video posted to social media which has since gone viral shows the argument escalating, with the woman shouting at her boyfriend, known as Memo, and calling him a ‘n*****’ multiple times.

The dispute culminates in the angry woman chasing her boyfriend down the aisle of the American Airlines flight set to depart from Miami to Los Angeles with a laptop, smashing him over the head with it. 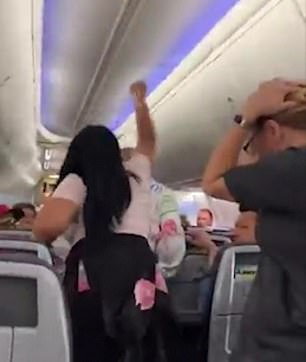 A furious woman left passengers on a flight in shock as she smashed a laptop over her boyfriend’s head, after accusing him of ‘looking at another woman’

She became enraged after accusing her boyfriend of looking at other women.

‘You wanna f***g try to look at other women?’ She threatens.

A war of words ensues, with the woman shouting at Memo to ‘shut the f*** up’ and adding ‘Yeah, you better believe that I wear the f*cking nuts in public.’

As the furious row begins to deteriorate, a cabin crew member intervenes to attempt to calm the situation, pointing out there is a small child in the woman’s vicinity.

‘Just take her off the plane,’ one passenger said.

The flight attendant then asks her to bring her bags to the front of the plane, at which point she threatens boyfriend Memo if he doesn’t come with her he’ll never see her again before appearing to slap him, as other passengers gasp.

The flight attendants decide at this point to ask the boyfriend to come to the front of the plane to get away from her.

But the woman does not let him get away, and runs after him down the aisle, smashing him over the head with a Dell laptop, and continuing to shove and slap him.

The woman grabs her hand luggage as she is booted off the plane, at which point the pilot tells her that she is going to be charged with assault.

Seemingly not phased by this, she replies, ‘Fine, whatever.’

The video has been retweeted almost 30,000 times since it was posted yesterday.

The woman was later reported to have been arrested.

American Airlines told The Sun in a statement: ‘Prior to departure from the gate on Sunday at Miami International Airport, two passengers who were traveling together were involved in a dispute.

‘Law enforcement was requested, and both passengers were removed from the aircraft.

‘We thank the American crew who worked quickly to diffuse the situation. Their actions resulted in a safe environment for all of our passengers.’ 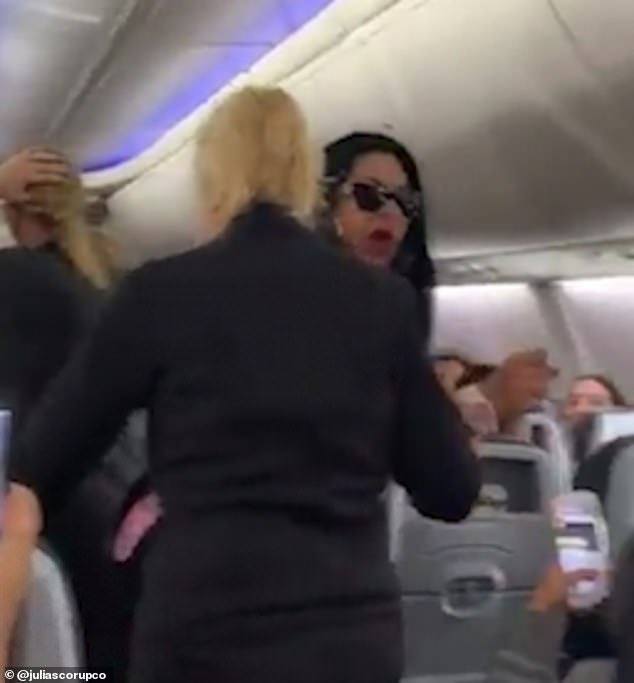 ‘You wanna fucking try to look at other women?’ She threatens, while also yelling at him to ‘shut the f*** up’