Police have sparked outrage by urging motorists not to use London roads blocked by climate change activists rather than move the protesters on.

In an effort to bring gridlock to the city, members of Extinction Rebellion are blocking roads for several minutes at a time in Westminster, Tower Bridge, Elephant and Castle, and Earl’s Court.

The group, who have armed themselves with placards and banners, began blocking roads from 7.30am on Wednesday during rush hour.

Climate change activists are blocking roads across London to cause gridlock. Pictured, one of the demonstrations on the A5 in London 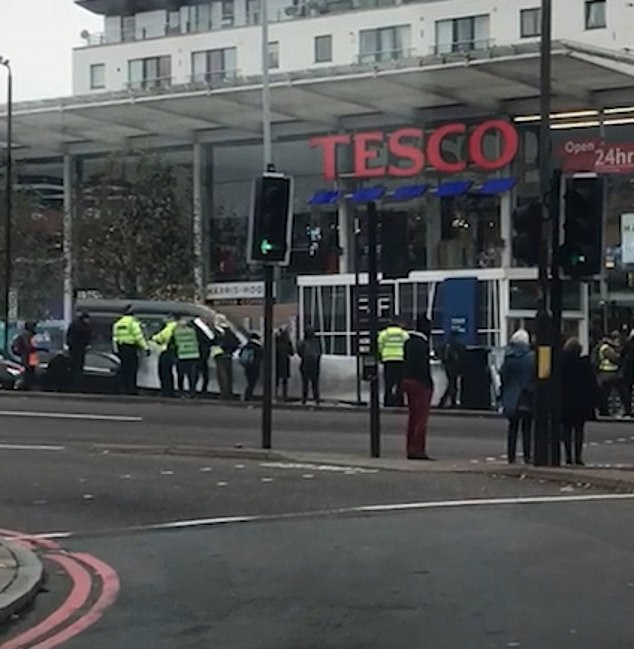 Police have advised motorists to avoid driving through London until Saturday – sparking anger from motorist who are demanding officers move them on. Pictured, one of the demonstrations on the A5 in London

The Metropolitan police said protests are expected to continue until Saturday and have advised against driving in the city.

Drivers across the city have hit out at the police for allowing the protesters to cause traffic chaos.

The Guardian reported during one of the protests at the south end of Lambeth Bridge, a passerby who asked police why they could not clear the roadblock, was told the activists had a right to protest.

‘You’re part of the problem and all,’ he shouted back at them.

Jim Davidson, an English comedian and former TV presenter, was spotted angrily remonstrating against protesters from his car.

It is claimed Davidson angrily shouted at police: ‘Why aren’t you moving them?’

Davidson reportedly shouted at police, before telling demonstrators who tried to approach him he did not talk to ‘lefties’

The Met also warned people that attempting to drive through the demonstrations was ‘very dangerous and illegal’.

Demonstrators are blocking roads for seven-minute periods, stepping aside for two minute intervals before repeating the cycle.

The protests are part of a co-ordinated week of action organised by the group.

As part of the protests, dozens of demonstrators blocked five Thames bridges in London on Saturday afternoon.

Following the protests police made 82 arrests.