Twitter and YouTube are facing criticism for acting as a gateway to a neo-Nazi radio station that defended the views of the alleged Christchurch gunman.

A host of Radio Aryan, which has previously broadcast readings of Mein Kampf and is thought to be based in Wales, described Brenton Tarrant’s manifesto as raising ‘genuine fears that all white people have’ about ‘the invasion of our lands’, also claiming the New Zealand mass-killing was ‘the price of diversity’.

The station’s founder, using the moniker ‘Sven Longshanks’, had been using Twitter since 2015 under the handle @Radio Aryan, featuring a link to the Radio Aryan website, the Sunday Times reported.

Longshanks, whose real name is Steve Stone according to activist group HopeNotHate, also presents a show called The Daily Nationalist – which was reportedly accessible through The Daily National YouTube Channel and the Radio Aryan website.

Labour MP for Cardiff South and Penarth Stephen Doughty, a member of the home affairs select committee, told the Sunday Times he had raised concerns with ministers and the online giants, claiming they did not act to take the material down.

‘It is absolutely clear they do not give a damn,’ he said.

Hours after Tarrant, 28, was said to have carried out the mosque shootings that saw 50 Muslim worshippers die, Longshanks had reportedly said: ‘We condemn this attack, but the reasons he outlined in his manifesto are genuine fears that all white people have and that no politicians are actually speaking to.’

He also called the killings a ‘price tag attack’, saying they were ‘the price of diversity’.

The Sunday Times reported that Twitter deleted Longshanks’ account only after being contacted by that paper, and YouTube also removed broadcasts from The Daily Nationalist, accepting that the channel could have been hosting illegal content promoting white supremacists.

Online broadcaster Radio Aryan, which has previously broadcast readings of Mein Kampf and is thought to be based in Wales

A Twitter spokesperson told MailOnline: ‘We are committed to combating abuse motivated by hatred, prejudice or intolerance. We do not comment on individual accounts for privacy and security reasons, however as per our Hateful Conduct Policy, we prohibit behaviour that targets individuals based on protected categories including race, ethnicity, national origin or religious affiliation.

‘This includes references to violent events where protected groups have been the primary targets or victims.’

A spokesperson for Google, which runs YouTube, told MailOnline: ‘We do not allow videos that incite hatred on YouTube and work hard to remove content that violates our policies quickly, using a combination of human flagging and review and smart detection technology.

‘Every month, we remove millions of videos for violating our policies. We’re making progress in our fight to prevent the abuse of our services, including hiring more people and investing in advanced machine learning technology.

‘We know there’s always more to do here and we’re committed to getting better.’

Longshanks – whose nickname is a reference to Edward I, who expelled Jews from England in 1290 – had said they categorically condemn all violence associated with nationalism, and it is not supported anywhere in their broadcasts. 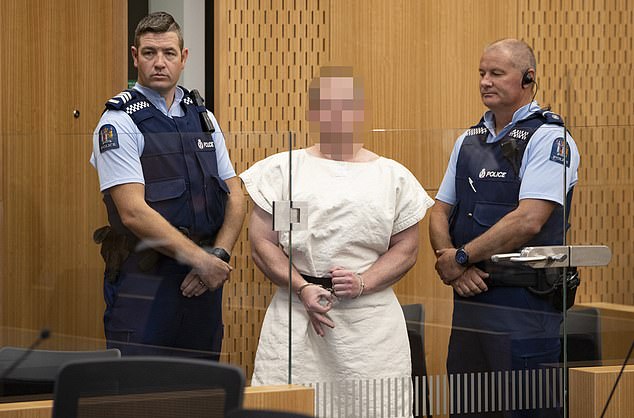 The station has broadcast claims that black people ‘prefer witchdoctors’ over hiring lawyers and pornography is a ‘Jewish enterprise’ intended to damage non-Jews.

Nick Lowles, head of Hope Not Hate, had previously told the Mail on Sunday: ‘Radio Aryan has become a platform for British Nazis to push out their dangerous and probably illegal hatred. It is vital the authorities immediately investigate the contents and the people behind it.’

A spokesman for Ofcom had said: ‘Radio Aryan is an internet radio station. As such it is not licensed by Ofcom or subject to our broadcasting rules.’

Forty-two victims of the Christchurch massacre have been buried since the terror attack, including a three-year-old boy.

A group burial for 26 of the victims was held on Friday after a Muslim Call to Prayer followed by a two-minute silence.

Tarrant, who has been charged with one count of murder and is being held in New Zealand’s only maximum security prison, is alleged to have live-streamed the terror attack on Facebook.