Fury as woman with Asperger’s is removed from BFI screening

Cinema-goers expressed their fury after a woman with Asperger’s was forcibly removed from a BFI film screening because she was laughing too loudly at the jokes.

Tamsin Parker was watching a screening of The Good, the Bad and the Ugly at the BFI’s cinema on London’s South Bank when she was ejected for her hysterical laughter.

She had attended the screening with her sister, Sabrina Parker, to celebrate her 25th birthday.

BFI have apologised for their response to the ‘challenging and complex’ situation, admitting they ‘got it wrong’.

Tamsin Parker (pictured) was watching a screening of The Good, the Bad and the Ugly at the BFI’s cinema on London’s South Bank when she was ejected for laughing

Recalling the incident on Twitter, film-goer Lloyd Shepherd said: ‘Can’t believe what I’ve just seen. Left @bfi screening of Good The Bad And The Ugly after a woman with Asperger’s was forcibly dragged out of the cinema.

‘She’d been laughing very loudly but at moments which were supposed to be funny. Some people complained. She was dragged out shouting “I’m sorry I have Asperger’s.” She was incredibly upset.

‘Some people applauded her being removed! Others stood up and shouted how terrible it was. A large number of us left.’

Mr Shepherd, an author, added: ‘As far as I know the man who shouted ‘Shut the f*** up, b*tch’ was not removed. Despite the abusive gendered language.

‘Am shaking with anger. That poor, poor woman. Just a little bit of empathy and everything would have been fine. Such naked intolerance. In the middle of London. Disgusting.’ 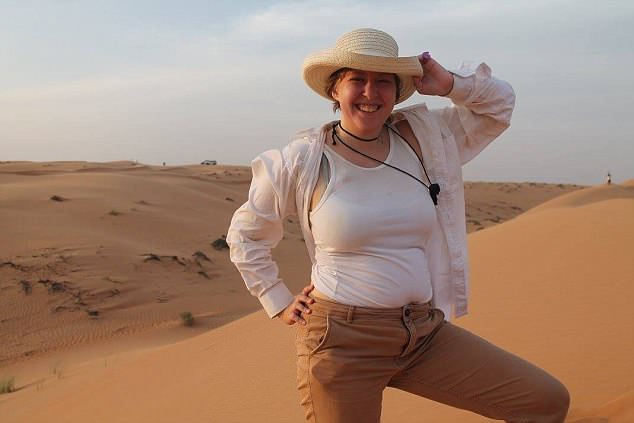 Responding to that Sabrina Parker, 21, who currently studies History at London School of Economics, said: ‘The woman is my sister. She’s home and watching the rest of the movie. Thank you for sharing this, as old fans of the @bfi we’re horrified that they would treat her so badly. Obviously she’s still very upset. It’s her favourite movie and it was her 25th birthday celebration.

‘We’re incredibly angry, but thank you to everyone who walked out or tweeted in response, your support means a lot. @bfi you got some apologising to do.’

Tamsin’s mother, Lydia, added: ‘She definitely deserves at least an apology. I am concerned that she was dragged out against her will. Thank goodness she had friends with her. This has never happened to her in any cinema.

‘I received a message from my daughter that she was forcibly removed from the cinema for laughing too much and was being held in security. My husband and I came to get her ASAP.’ 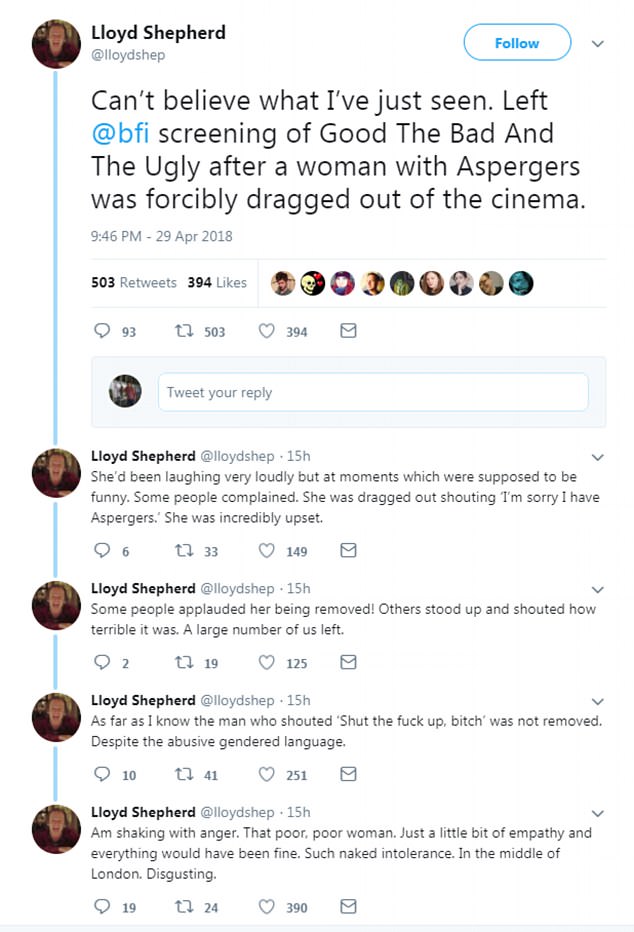 Lloyd Shepherd, who described what happened on Twitter, said he was ‘shaking with anger’

The theatre director and mother-of-two added: ‘I am shocked and disgusted at this whole situation. She was so humiliated. Luckily she is a strong and confident person.

‘She is okay and safely at home thanks. From what I understand security were more sympathetic when they heard she was Autistic. She shouldn’t have to check in with a cinema before a film though, should she? What happened to inclusivity?’

Daniel York, a friend of Tamsin, a 25-year-old artist and animator, said: ‘I’m really upset about this… No one loves cinema more than her…it’s just appalling.’

Another viewer said: ‘I was there too and found it sickening. A very unfortunate and uncomfortable situation. I would like to say that having returned later after calming down, I spoke to the manager and believe she was in a very difficult situation, still 100% not fair what happened to that lady.’

Amie-Jo Locke added: ‘Wtf. Have just witnessed a woman with Asperger’s being forcibly removed from a @BFI screening. Why? Because someone complained about her laughing. I feel sick to my stomach.’

A spokesman for BFI told MailOnline: ‘We are sincerely sorry to those affected by the incident at Sunday’s screening at BFI Southbank.

‘Our priority is for everyone to be able to enjoy our venue and we try hard to provide a good experience to our customers, however yesterday, in what was a challenging and complex situation, we got it wrong.

‘We are taking this situation extremely seriously and this morning we have been investigating further to understand what happened in more depth and contacting the customers affected.

‘We can and must do better in accommodating all the needs of our customers and we will be addressing what additional provisions and staff training we can put in place to deal with all situations with sensitivity.’

They added: ‘The abusive person was also asked to leave the screening and escorted from the cinema.’

Jane Harris, the National Autistic Society’s director of external Affairs, said the incident was shocking and that a colleague was at the screening, ‘along with others who were equally distressed by what they had witnessed’.

‘It’s great to hear that so many audience members were sympathetic, but this incident shows just how far we have to go for autistic people to get the understanding they deserve.’