Fury at Amazon deal in which New York taxpayers PAY the company $61,200 per job

Instead of opening their arms to welcome Amazon, some Queens residents are fearing a ‘Scamazon’.

After the Seattle-based retail giant announced plans to build part of its second headquarters in Long Island City, Queens, locals took to the street on Wednesday to decry to massive tax incentives New York offered to lure Amazon.

Hundreds gathered to protest Amazon’s impending arrival in New York, condemning nearly $3 billion in tax breaks and cash grants for the company, and worried the move will drive up rents and overload public transit.

The online retail giant announced on Tuesday that it had selected Long Island City and Crystal City, just outside Washington DC, for two new headquarters that will each hire 25,000 people.

Protesters gather in Long Island City to say ‘No’ to the Amazon ‘HQ2’ decision on Wednesday in Queens, New York 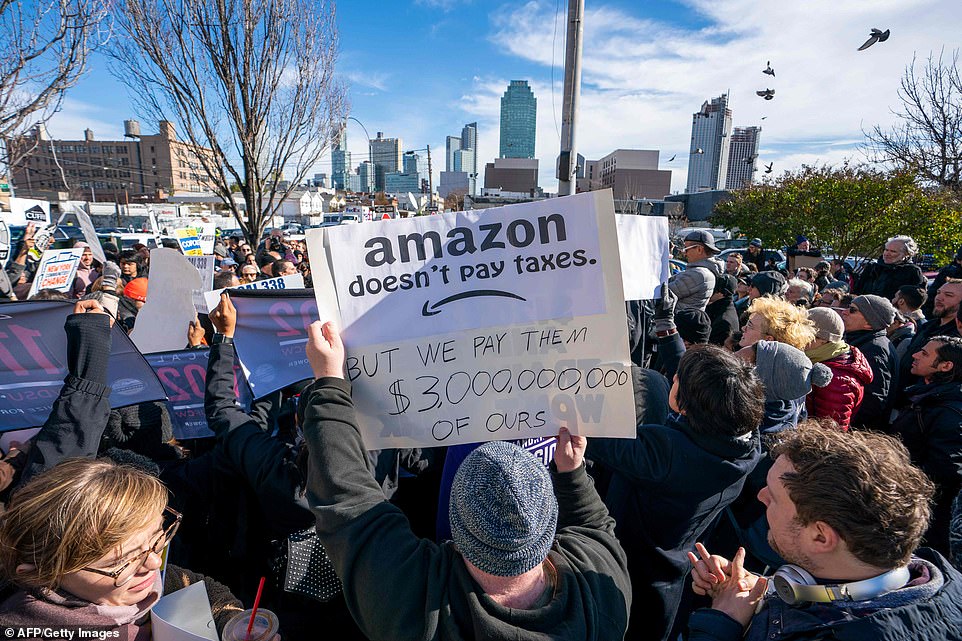 It’s exciting for some, worrisome for others: The arrival of a massive headquarters of technology giant Amazon in two East Coast communities is certain to bring huge changes 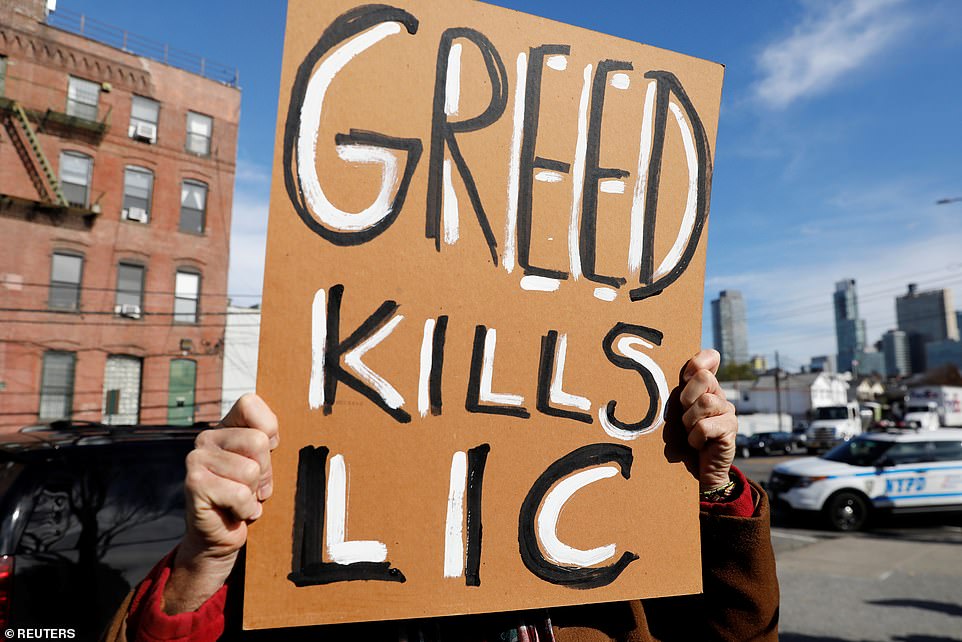 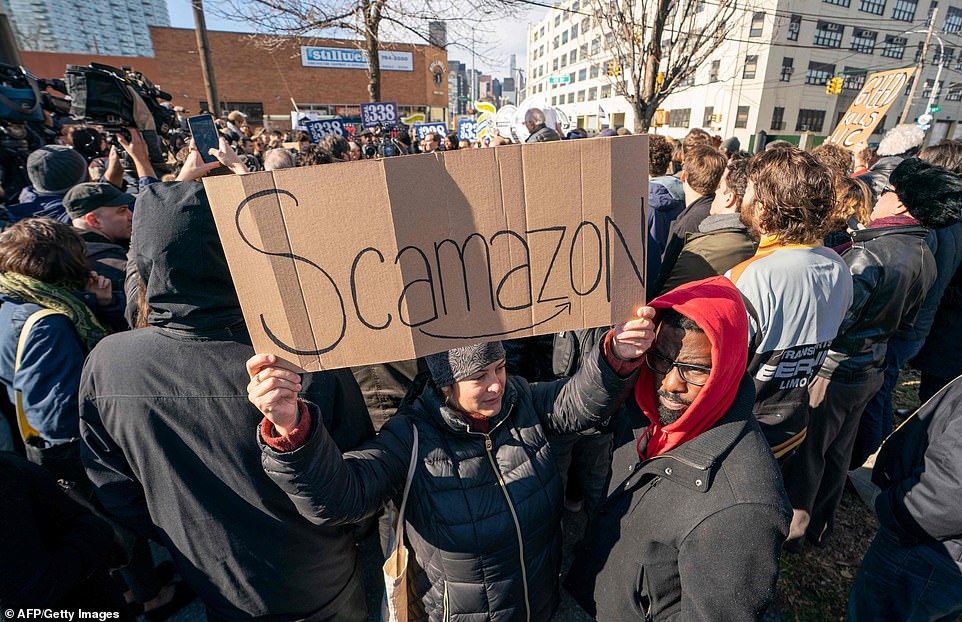 Amazon announced Tuesday after a yearlong search that it would split its ‘HQ2’ between Arlington, Virginia, outside the US capital, and the Long Island City neighborhood in the New York borough of Queens (above) 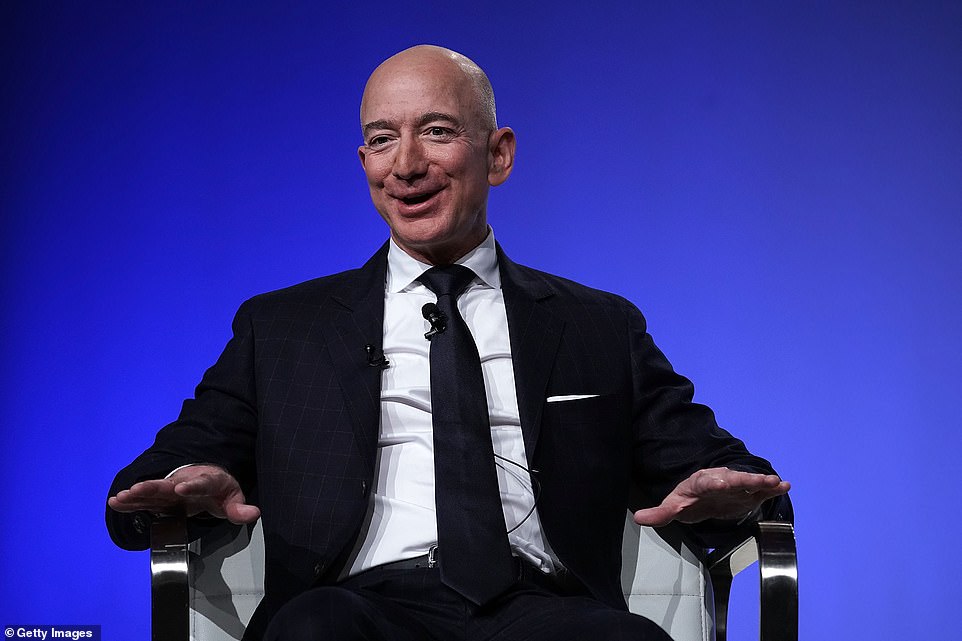 City tax credits, which are available to other companies as well as Amazon, bring the total to nearly $3 billion in incentives.

In contrast, Virginia offered about $596 million in cash grants and tax credits, plus $323 in infrastructure pledges – about half of New York’s offer for the same number of jobs.

The Queens agreement also contained buried within its provisions a promise that the government will secure helipad rights for Amazon – a prospect that has weary 7 Train straphangers fuming at the prospect of billionaire Amazon founder Jeff Bezos buzzing overhead while they suffer on the subway.

‘We at the city council are going to be looking at every aspect of this,’ he said. ‘We are going to see how we can reengage in a process that we were deliberately excluded from.’ 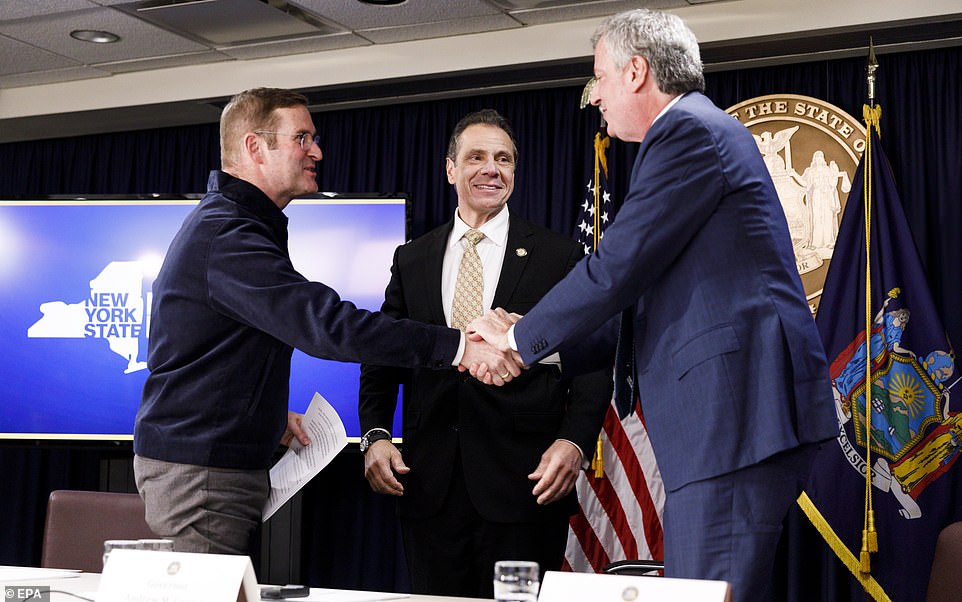 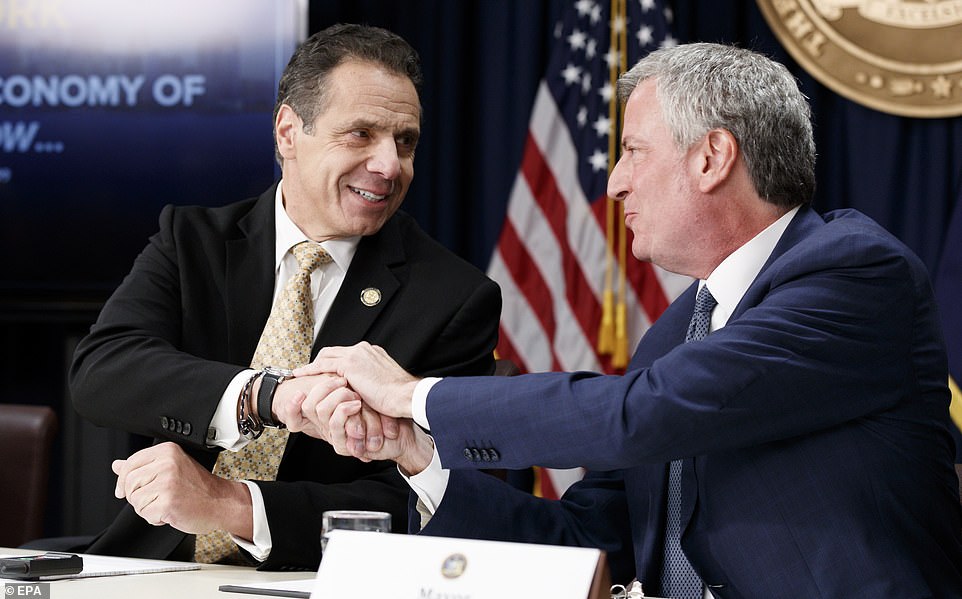 Cuomo (left) and de Balsio have often butted heads, but the two came together to praise the controversial deal to give Amazon billions in tax incentives for building a corporate campus in Queens 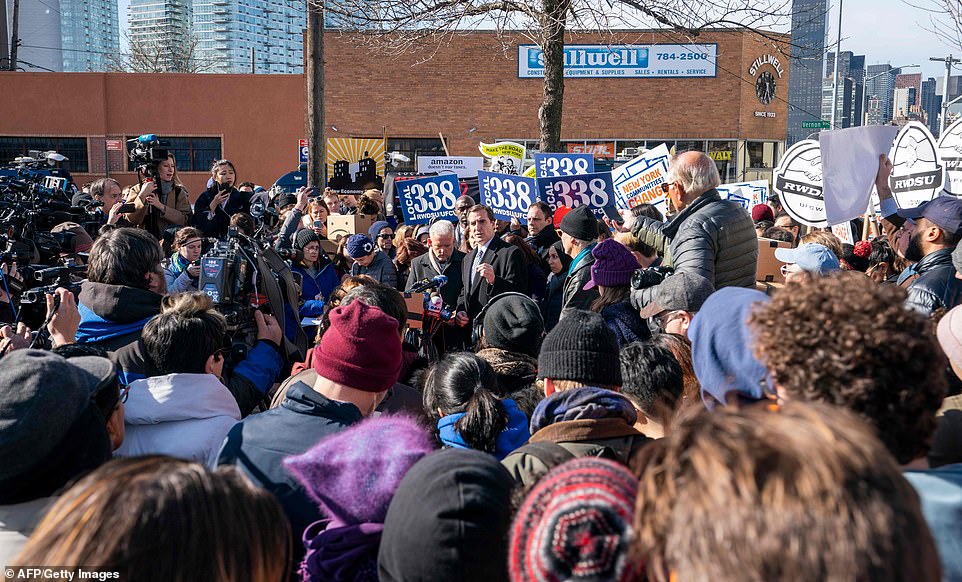 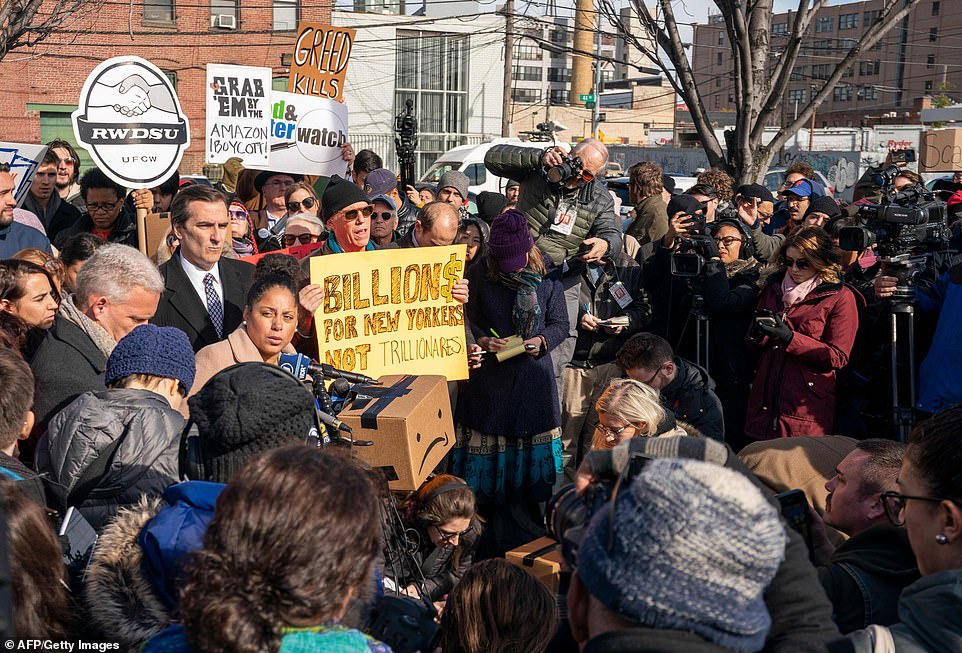 Locals in Queens protested on Wednesday, furious that Amazon’s presence will spike rents and overload transportation

New York state senator Mike Gianaris also complained about ‘secrecy’ behind the deal, vowed that opponents would ‘go to court if we have to’ to renegotiate the agreement and demanded a consumer boycott of Amazon.

Angela Tamura, a 47-year-old freelance artist who lives in nearby Jackson Heights, said she was ‘very scared’ that Queens will no longer be ‘affordable’ but was skeptical about demands for a boycott.

‘They have worked themselves into our lives so deeply it’s very hard to let go of Amazon,’ she said.

Shawn Dixon, 35, who works at a nearby barber shop, demanded that the city and the governor change the terms of the agreement with Amazon and protect small businesses to stop them being pushed out by rising rents.

‘I don’t know what can happen but that’s why we are here today, to properly put pressure on him (Cuomo) to change it,’ Dixon said.

Congresswoman-elect Alexandria Ocasio-Cortez, a self-proclaimed Democratic socialist whose district is adjacent to Long Island City, also spoke out to decry the deal.

‘Amazon is a billion-dollar company. The idea that it will receive hundreds of millions of dollars in tax breaks at a time when our subway is crumbling and our communities need MORE investment, not less, is extremely concerning to residents here,’ she said on Twitter. 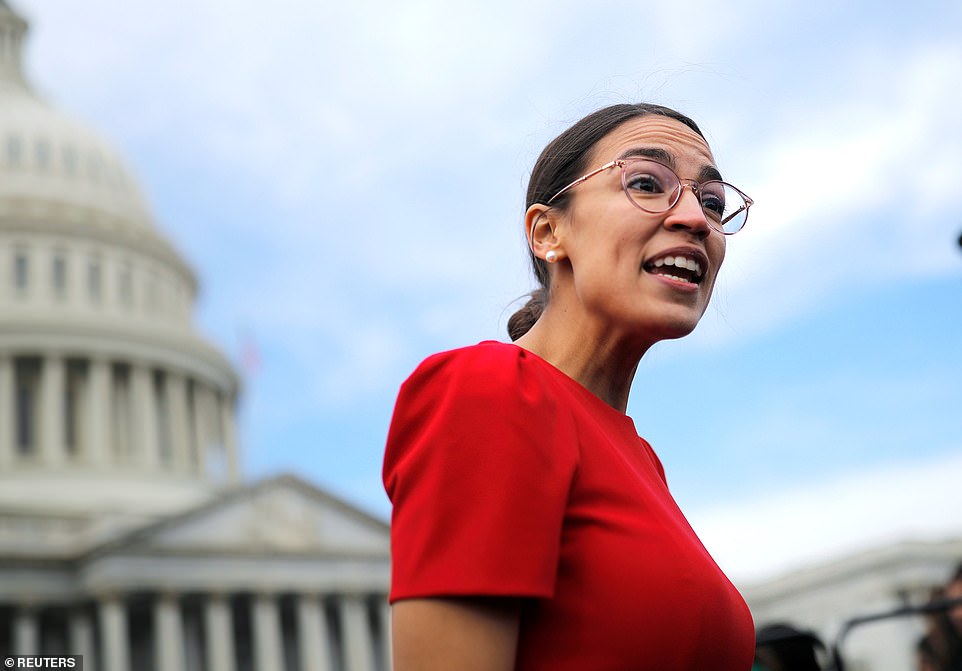 Congresswoman-elect Alexandria Ocasio-Cortez, a self-proclaimed Democratic socialist whose district is adjacent to Long Island City, also spoke out to decry the deal to bring an Amazon campus to Queens 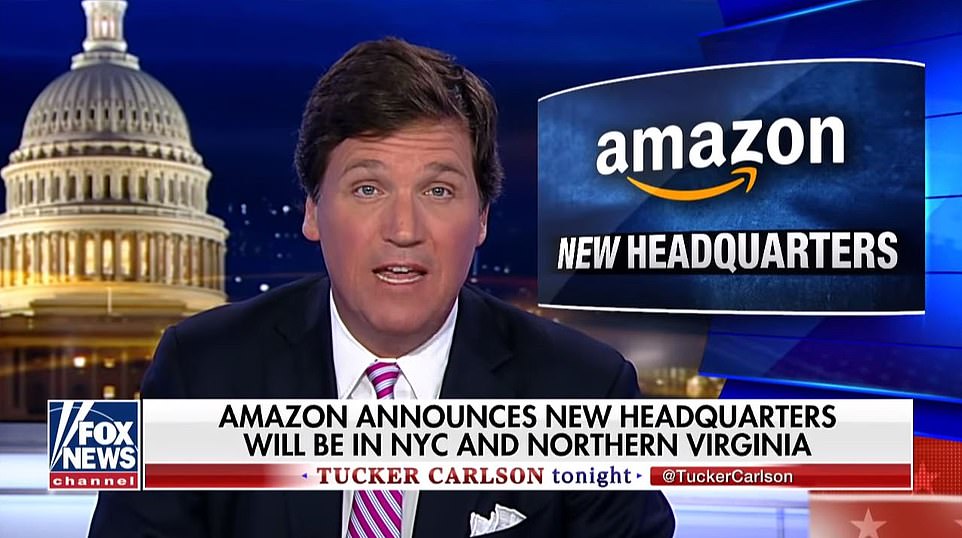 On his Tuesday show, Fox News host Tucker Carlson chimed in saying that for the first time, he agrees with Ocasio-Cortez

On his Tuesday show, Fox News host Tucker Carlson chimed in: ‘Hate to admit it, but Alexandria Ocasio-Cortez has a very good point.’

‘That’s the only time I’ve agreed with Alexandria Ocasio-Cortez, but it’s hard to argue with the internal logic of her point. The richest man in the world just got two billion dollars in taxpayer subsidies, how does that work?’ Carlson said.

Amazon spent 14 months selecting a new site for it’s ‘HQ2’, starting with a list of more than 230 cities.

Critics were quick to say that the final selection – a split between the two huge centers of power and wealth on the East Coast – made the selection process smell like a scam.

‘Amazon is expanding in the nation’s two major centers of power, because it intends to envelope, smother and usurp that power for itself,’ wrote Amazon critic Stacy Mitchell, co-director of the Institute for Local Self-Reliance, on Twitter, calling the search process ‘a giant ruse’.

‘With Amazon spreading its tentacles across D.C. and enlisting liberals like De Blasio and (Virginia Governor Ralph) Northam to fund its growth with billions of public dollars — I fear we’re no longer a democracy.’

WHAT WILL TAXPAYERS PAY AMAZON? WHAT WILL THEY GET?

Amazon stands to get nearly $2.5 billion in tax breaks and other incentives as part of its deals to open up two new offices with more than 25,000 new jobs at each location. New York City and Arlington, Virginia, won the competition Tuesday to house Amazon’s two new offices, which are being called the second and third headquarters locations for the Seattle online retailer. Nashville, Tennessee, was selected to become an operations hub. Following are some of the perks Amazon says it will get, along with the benefits to the chosen cities.