A monkey statue on display at a seaside festival has been branded racist after a passerby claimed it was made to look like ‘a slave’.

The figure is seemingly dressed in a ‘native-style’ skirt and headdress and has chains around its wrists, which one visitor claimed had ‘connotations of slavery’.

The passerby spotted the figure at the North Quay in Hayle, Cornwall, to promote the Hayle Harbour Fest and described it as ‘totally tacky, tasteless, and racially offensive’.

But the event organiser claimed the statue was simply a ‘children’s character’ that had ‘been around for 20 years’, and that the chains were to keep the statue in place.

Posting the image to Facebook, the passerby wrote: ‘I just had to stop and photograph this while in Hayle today, highly visible and situated on North Quay a few yards from the swimming pool.

‘I found this really quite offensive as it appears to represent a person of colour but with monkey-like features.

‘As it is standing fully erect with a woman’s body features, and wearing both a head dress and native style skirt, then I take it represent [sic] a coloured human female.

‘Worse it’s also chained by the wrists, from one hand dangles an oversize banana, from the other hangs the sign “Welcome To Hayle”.’

The statue was in place to promote Hayle Harbour Fest and event organiser Mark Terry said it never intended to offend anyone.

He said: ‘We never meant to offend anyone; it is a cartoon character. It’s not a gorilla or a monkey; it’s a children’s character.

‘We have put lots of effort into making this event and we decided that rather than putting up posters which often get taken down we would try something different.

‘It is a fibreglass model. We have taken it all over the place and it has been great advertising. 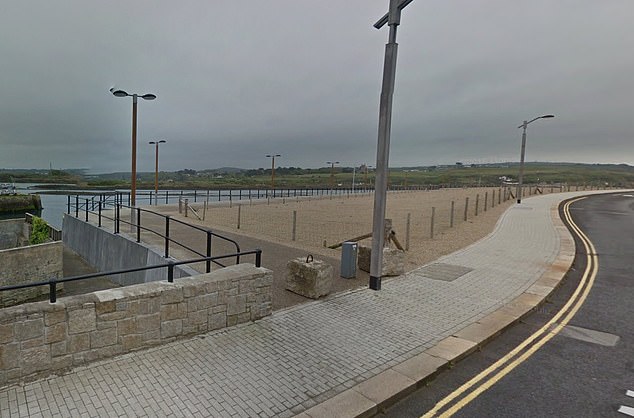 The passerby spotted the figure at the North Quay (pictured) in Hayle, Cornwall, to promote the Hayle Harbour Fest and described it as ‘totally tacky, tasteless, and racially offensive’

‘I have friends of lots of different races and none of them took offence to it. The character has been around for 20 years.

‘If someone was offended I would rather they give me a ring and we could have a chat about it. If we could see how it would offend people we would take it off.’

Responding to the figure, Mayor of Hayle Clive Polkinghorne said: ‘Having read the letter my comment from afar, is that a statue on a vehicle does not require planning permission, we must then consider the legislation on offending, whether it is racist or not, as I am sure that you are aware there are many statutes covering this area.

‘Redress on these will be through initially complaining to the police.’

Tregenna Castle has been contacted for a statement about the advertising that appears on the truck but declined to comment.