G string-wearing woman films ‘Karen’ telling her to ‘cover up’

A young woman who was enjoying a sunny day at the beach went viral after filming an angry ‘Karen’ storming over to her and demanding that she ‘cover up’ – accusing her of being ‘nude in a public place’ despite the fact that she was wearing a bikini.

Aurea Miranda, a dancer who is originally from Mexico but now lives in New York City, caught the unnamed woman on camera at Freedom Lake in LaGrange – where she was spending a day soaking up the sun.

The unidentified woman told Aurea to ‘get her a** covered’ because her sons were ‘staring’ at her, while insisting that she couldn’t ‘be nude on a beach’ – even though she was wearing a swimsuit.

Under fire: Dancer Aurea Miranda filmed an unnamed woman yelling at her to ‘cover up’ while she was wearing this thong bikini at a beach area near a lake in New York 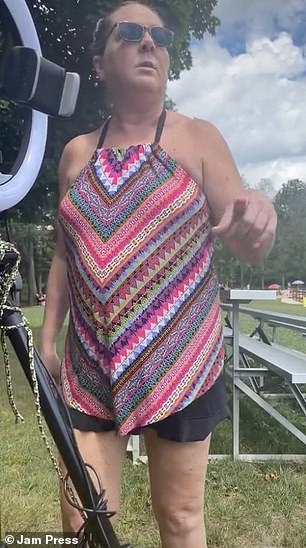 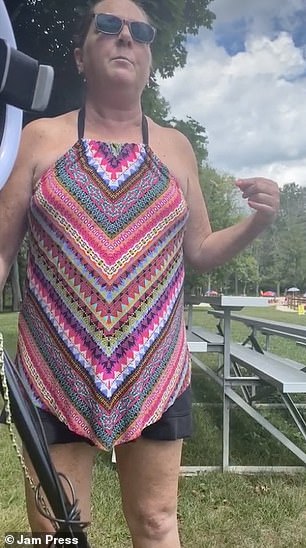 Furious: The unidentified woman accused Aurea of being ‘nude’ and said that she needed to ‘cover up’ because her sons were ‘staring’ at her ‘a**’

Aurea, who was filming TikTok videos against the beautiful backdrop of the lake, caught the entire confrontation on camera, having been recording a clip when the woman stormed over to her.

In the video, the woman, who was wearing a pair of shorts, a halter neck shirt, sandals and sunglasses, marches up to Aurea, who was rearranging her tripod and ring light at the time.

‘You see those group of boys over there? Those are my boys. They’re staring at you’re a** which is hanging out in the middle of a public place,’ the woman told Aurea.

‘Do you need a pair of shorts? Because I have an extra pair.’

In the caption of the video, Aurea noted that the woman failed to put on a mask before coming over, but happily broke social distancing recommendations by getting incredibly close to the dancer during the conversation.

Confused by the woman’s angry tirade, Aurea asked for clarification, replying: ‘What do you mean?’ 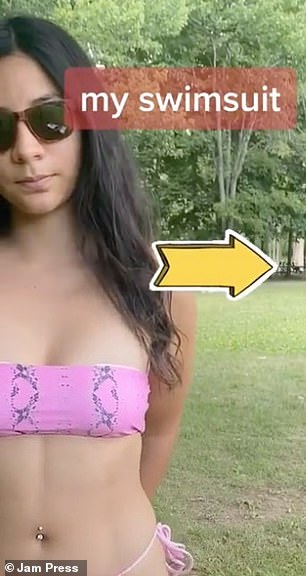 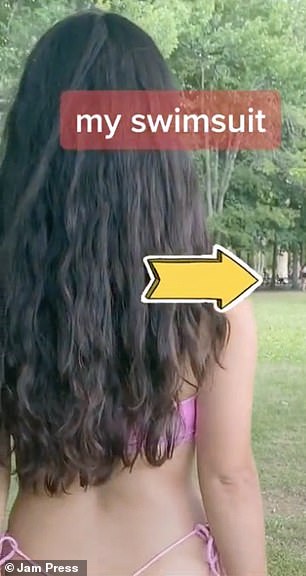 Upset: Aurea posted a video of the incident on her TikTok account, where it quickly went viral – however viewers were split over whether her skimpy bathing suit was acceptable in public 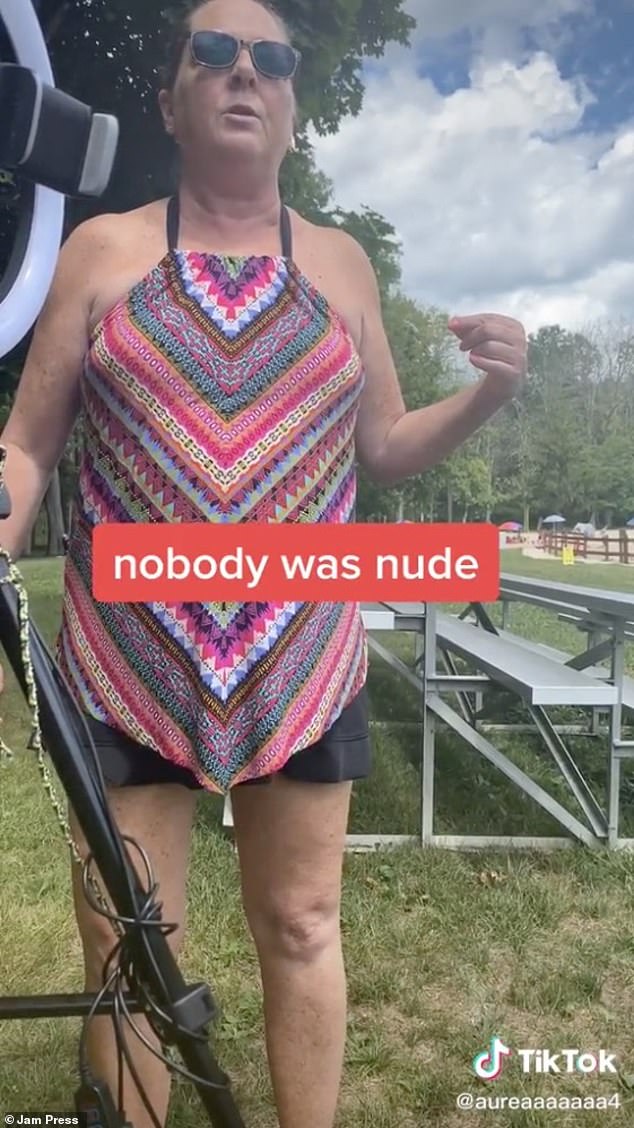 Outrage: ‘You see those group of boys over there? Those are my boys. They’re staring at you’re a** which is hanging out in the middle of a public place,’ the woman told Aurea 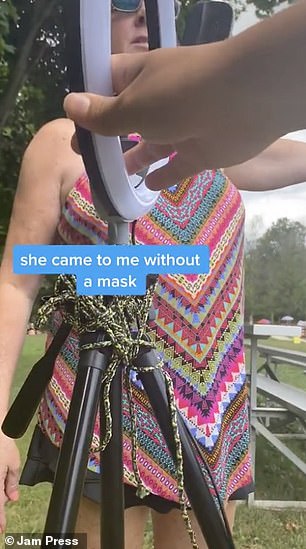 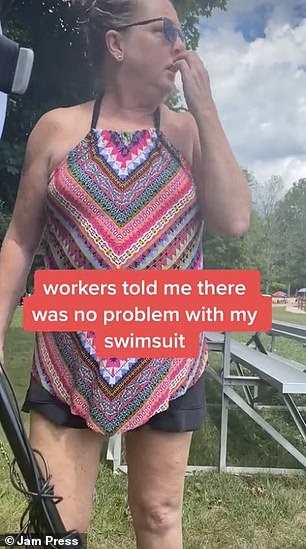 Unsafe: Aurea pointed out in the video that the woman did not wear a mask or follow social distancing regulations, while also noting that staff insisted her bikini was absolutely fine

‘I mean get your a** covered, that’s what I mean. Thank you,’ the woman told her, before Aurea then asked: ‘Is there a rule that says that?’

The woman then told her that there is a rule against ‘public nudity’ – despite the fact that Aurea was very clearly wearing a bathing suit.

‘Yea there is, it’s called nudity,’ the mom said. ‘You can’t be nude on a beach like this. It’s a public place.’

Aurea later confirmed with workers at the park that her swimsuit was fine to wear.

In a separate video, a group of guys can be seen lingering in the background staring at Aurea while she filmed her video.

Aurea posted the clips to her TikTok account, where they have since gained over 3.1 million views leaving users shocked at the encounter. 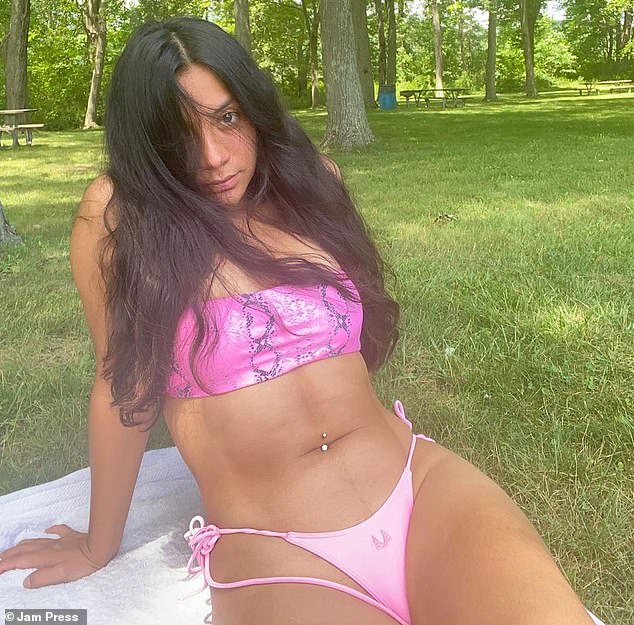 Backlash: Many TikTok users voiced their support for Aurea, insisting that the unnamed ‘Karen’ should spend more time teaching her sons ‘not to stare’ 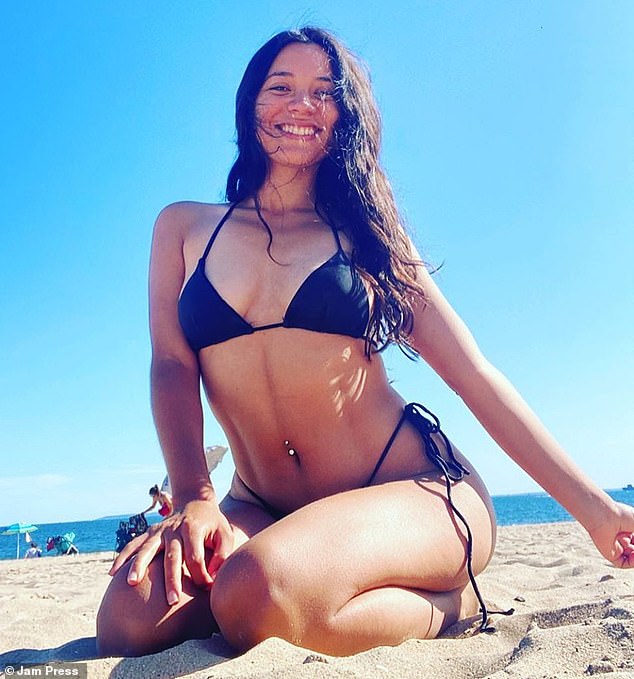 Free country: ‘Lmao guys there is nothing wrong with what she’s wearing that lady and her child are just thinking like perverts,’ one person commented on the video 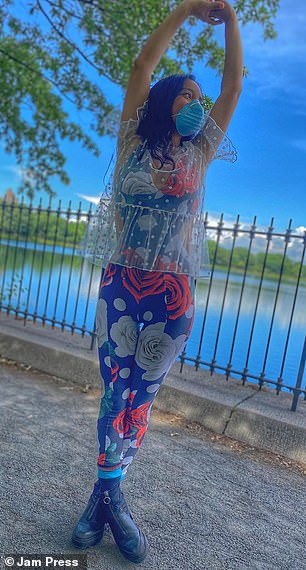 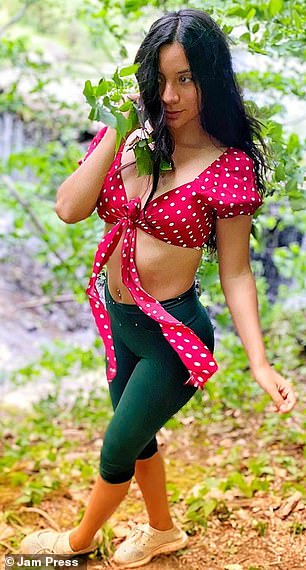 Debate: However some people told Aurea that she should have worn a less skimpy bikini design at the lake because it is a family-focused public place

One said: ‘Why she can’t teach her boys not to stare.’

Another added: ‘Teach her boys to not stare at a girl minding her own,’ while a third chimed in: ‘Lmao guys there is nothing wrong with what she’s wearing that lady and her child are just thinking like perverts.’

Meanwhile, one wrote: ‘Tell her to control her boys! Why does no one tell them to raise their boys better.’

‘People can wear whatever they want maybe people should teach boys how to control themselves instead of attacking the females,’ one user added.

However, there were some users who were on the side of the unidentified woman – with one telling Aurea that she shouldn’t have been wearing a thong-style bikini at a public place that is meant for families.

‘I agree with the mom, this is def a lake, a more family setting,’ the person wrote. ‘Your [Instagram] shows you were basically wearing a G string, def not appropriate for a lake.’