G7 meeting in Bavaria: Boris Johnson rallies group to keep up the fight on Ukraine

World leaders last night agreed a new ‘surge’ to defeat Vladimir Putin in Ukraine after Boris Johnson warned ‘backing down’ now would be a catastrophic mistake.

At a summit in Germany, Emmanuel Macron, who had been seen by No 10 as wavering, yesterday said he was committed for the long haul after the Prime Minister warned against encouraging Volodymyr Zelensky to accept a peace deal.

Downing Street said the Russian leader’s decision to fire missiles on the Ukrainian capital had ‘stiffened the resolve’ of leaders.

‘There is a real sense that Putin was stupid to bomb Kyiv as the G7 gathered’, a No 10 source said. ‘It has made the leaders more united’.

The timing of the attack was seen as a pointed message to G7 members to encourage Ukraine into a peace deal where it cedes large portions of its territory. And in a moment of light-heartedness yesterday, the leaders sat together and joked about the Russian leader’s fondness of being photographed without a shirt on. 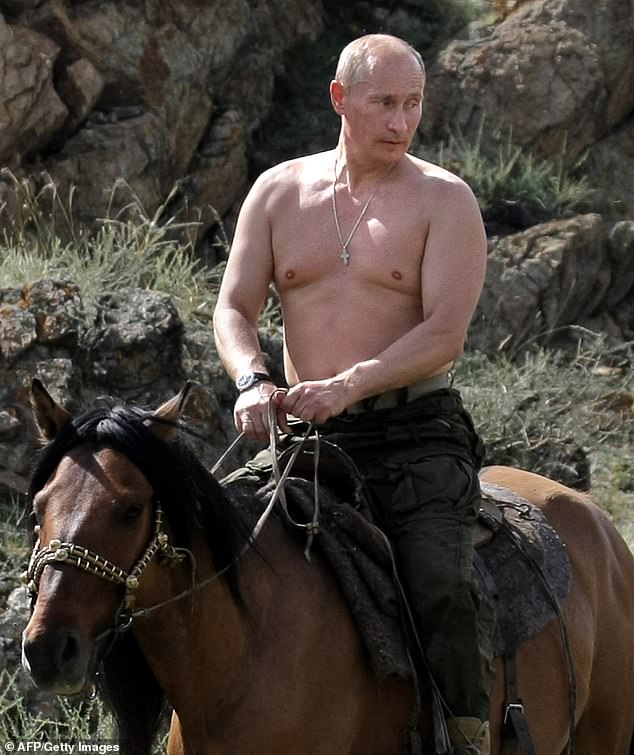 As they sat down for a meeting in the Bavarian Alps, Mr Johnson questioned whether they should keep their suit jackets on.

‘Shall we take our clothes off?’ he asked, as leaders endured sweltering temperatures inside the summit venue as the German hosts opted not to use air conditioning in a bid to be environmentally friendly. ‘We all have to show that we’re tougher than Putin’.

Justin Trudeau, the Canadian PM, referred to an infamous picture of Putin on a ‘bare-chested horseback ride’, before Mr Johnson added: ‘We’ve got to show our pecs.’ The Prime Minister yesterday argued that the leaders must help ‘strengthen Ukraine’s hand’ by providing more military support rather than encourage Mr Zelensky to give up territory in a peace deal.

Mr Johnson and Mr Macron, who have until now had a strained relationship, yesterday agreed to a ‘reset’ as they held one-on-one talks at the summit.

A No 10 source said that they now believed the French president was ‘on the right page’ when it came to Ukraine.

He said: ‘They’re getting on well, they had a very good meeting. It’s all great with the French now.

‘Both sides are aligned. [Mr] Macron said the defeat of Russia is option number one to pursue. Option two is put [Mr] Zelensky in the best position to strike a deal.

‘We found that positive and officials say we are heading for a strong statement from this summit on Ukraine.’ 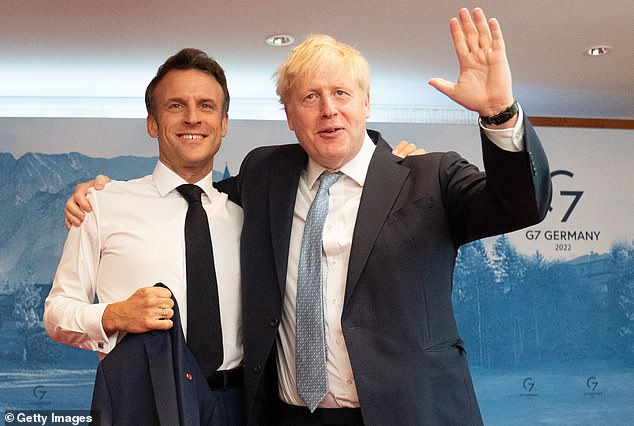 Close: Emmanuel Macron, left, and Boris Johnson putting on a united front at the talks

In talks with Mr Macron, Mr Johnson ‘stressed any attempt to settle the conflict now will only cause enduring instability and give Putin licence to manipulate both sovereign countries and international markets in perpetuity’.

The PM said yesterday: ‘The consequences of what’s happening for the world are tough, but the price of backing down, the price of allowing Putin to succeed, to hack off huge parts of Ukraine, to continue with his programme of conquest, that price will be far, far higher and everybody here understands that.’

In behind-the-scenes discussions, he reportedly told world leaders they must back an Iraq-style surge strategy to help Ukraine strike a decisive blow to win the war.

The comments came after Mr Johnson’s spokesman said he ‘firmly believes that it is in everyone’s interest to push back against Russia’s invasion to support Ukraine, because failing to do so would have significant knock-on impacts’. 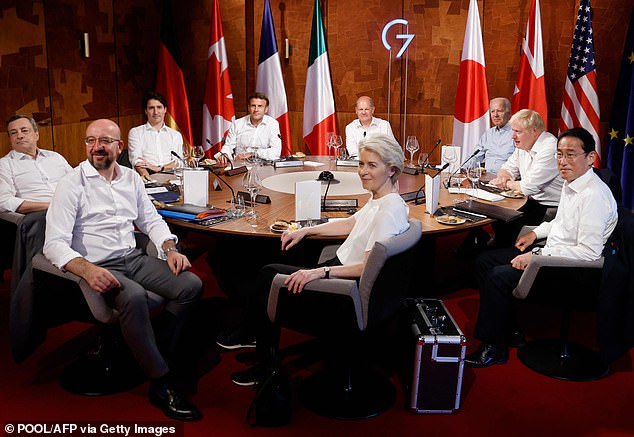 The spokesman added: ‘It would embolden other authoritarian countries, and it would put the peace and prosperity of the United Kingdom at risk.’

The message was repeated by US President Joe Biden, who said: ‘We have to stay together, because Putin has been counting on from the beginning that somehow Nato and the G7 would splinter. But we haven’t and we’re not going to.’

The Prime Minister today will call on world leaders to take urgent action to get essential food supplies out of Ukraine where 25 million tons of grain are currently stuck.

Mr Johnson will announce £10 million in funding for repairs to the Ukrainian railways in a bid to get the grain out by train. In meetings today Mr Johnson and German Chancellor Olaf Scholz will argue that countries should reduce the amount of biofuel they consume so the grains needed to make it can be sold as food instead. However, the US and Canada, which both produce large amounts of biofuel, are resisting the call.

The UK, US, Germany, France, Canada, Italy and Japan make up the G7. Mr Zelensky is due to address the world leaders by video-link today.