The brother of a cop-killer shot dead by police over the summer will face his own murder rap after the Georgia man allegedly gunned down a young married couple that lived next-door during a break-in – and was nabbed only after a string of robberies in which he was shot after stabbing a police officer.

Matthew Lanz, 22, broke into the home of Justin and Amber Hicks in the Atlanta suburb of Acworth on Wednesday night and shot them dead as their 2-year-old child was in the house, according to a statement from Cobb County police.

The couple’s bodies were discovered when Cobb County police officers responded to a call to the Hicks home around 9:30 am on Thursday. The couple, both 31 – who moved to the neighborhood in September – was found dead from gunshot wounds but the toddler was unharmed.

Lanz’s brother, Austin, 27, killed a police officer outside the Pentagon this past August before he was shot dead by cops during the attack on the military headquarters in Washington, WSB-TV reported.

Matthew Lanz is accused of killing his new neighbors Justin and Amber Hicks, both 31, in their Acworth home on Wednesday night and multiple burglaries in Cobb County 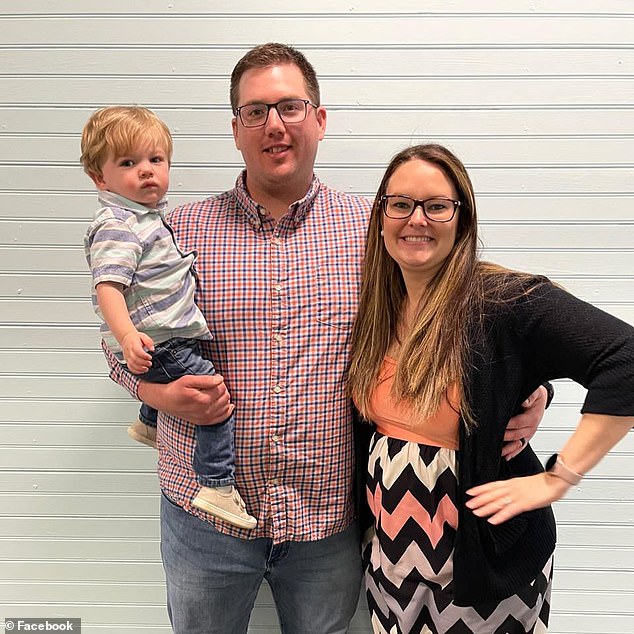 Justin and Amber Hicks were found dead in their Acworth home on Thursday. Their two-year-old son was unharmed 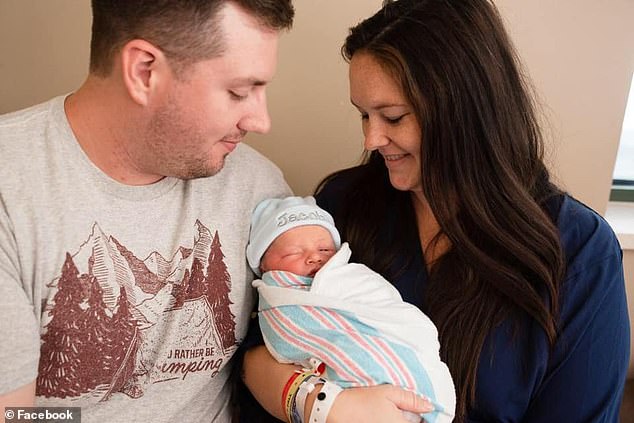 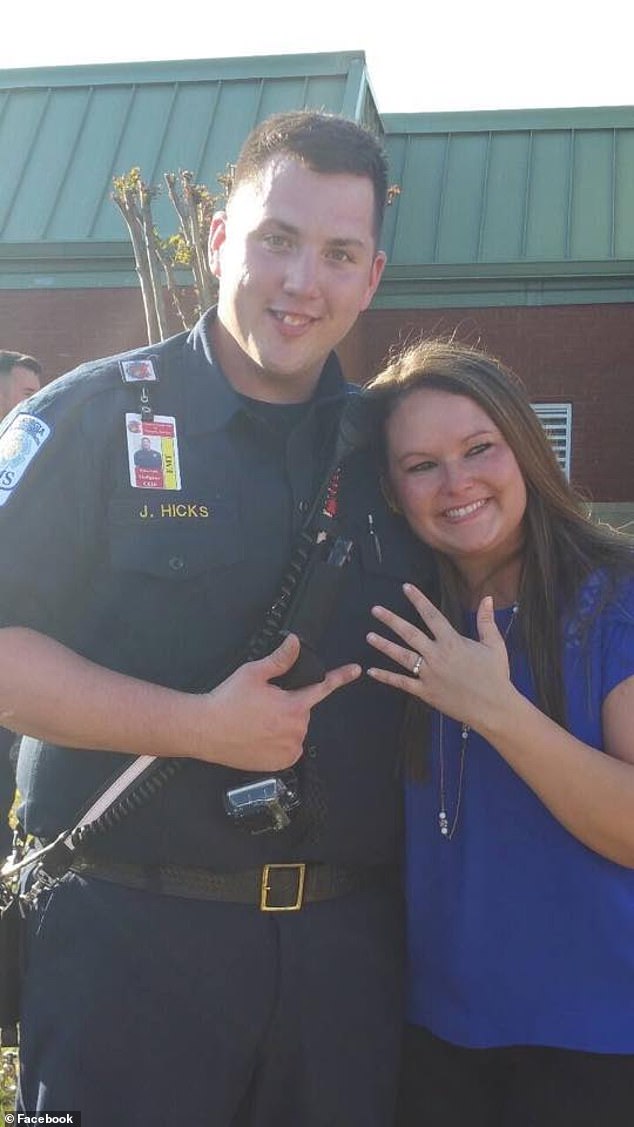 The Hickses, who had just moved in to their home in September, are remembered as ‘two literal angels on Earth’ 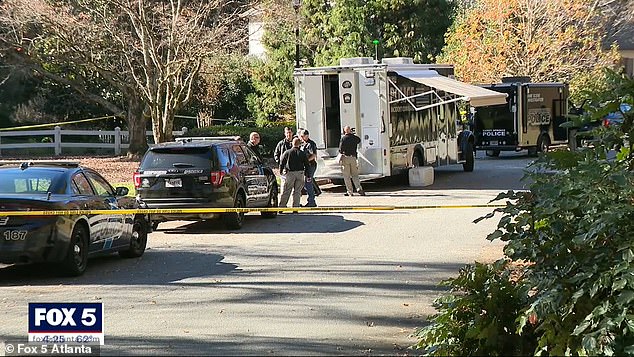 Lanz’s home is directly around the corner and shares a backyard fence with the Hicks’s home but it is unclear if they knew one another.

Cops didn’t link Matthew Lanz to the double murder until he allegedly tried to break into two homes in Sandy Springs, about 30 miles from Acworth, the next day.

This time, cops arrived to find Lanz in one of the homes but he ran towards one of the responding officers and stabbed him several times, Sandy Springs police said.

Another officer shot at Lanz, hitting him at least once, to end the one-man crime spree.

He was taken to a local hospital before being booked at Fulton County Jail.

The stabbed officer was rushed to GradyHealth Hospital. He is now recovering at home and doing ‘extremely well,’ the Sandy Springs Police Department posted on their Facebook page.

A second officer was injured by a bullet fragment that hit his hand.

The residents of the home were unharmed.

Cops were able to connect Lanz to the double homicide in Acworth and he was charged with six counts, including home invasion and felony murder. 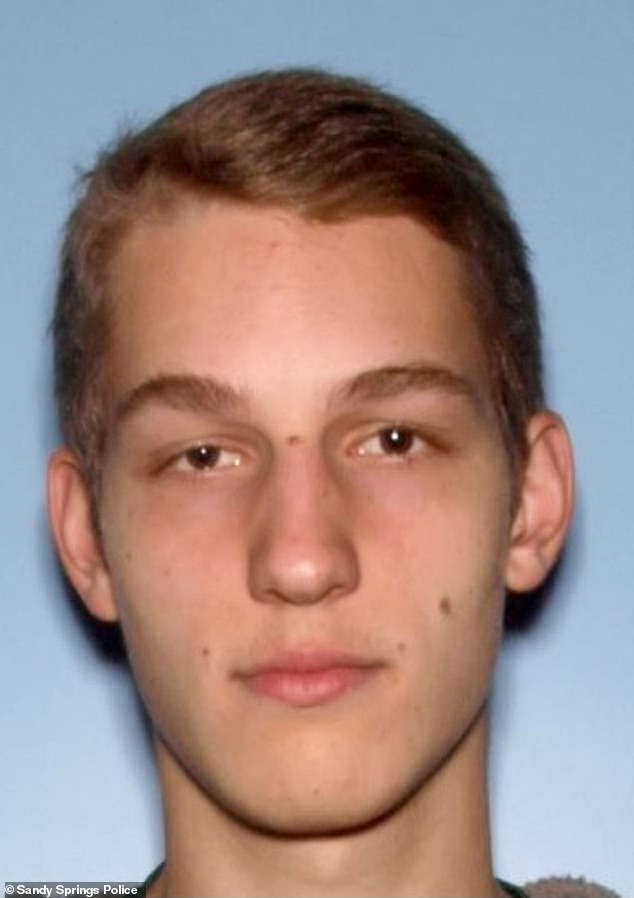 Lanz is being held at Cobb County Adult Detention Center while the investigations continue, according to Cobb County police.

A GoFundMe page created to support Justin and Amber’s funeral and their two-year-old son describes the couple as ‘two literal angels on Earth.’

The Cherokee County Fire Department, where Justin worked for over six years, posted a tribute. Fire Chief Tim Prather described Justin as a ‘happy, funny, loved by many kind of guy.’

‘He was always a highly motivated, energetic individual who deeply loved his job as a firefighter and consistently worked to do better and be better every day.’

Austin Lanz was arrested for breaking into the same home where the Hicks’s were killed in April, when another family lived at the address, according to WSB-TV.

He was accused of harassing the previous family, who told The Associated Press he had ‘mental health issues.’

The FBI reported that Austin’s deadly attack on the Pentagon appeared to be unprovoked when he exited a bus at the Pentagon Transit Center and stabbed Officer George Gonzalez, 37.

His criminal history and neighbors: ‘appear to suggest the violence was more likely the act of a troubled, violence-prone individual than part of a broader conspiracy,’ the AP reported at the time.