Gabby Douglas has revealed that she is taking a break from social media to focus on her mental health, just a few days after she alluded to the abuse she suffered at the hands of Larry Nassar while training for the 2016 Olympic Games in Rio de Janeiro.

The former gymnast, 26, took to Instagram last Thursday to post a compilation video of herself performing a full-twisting back tuck on the balance beam, noting that it was ‘one of [her] favorite skills to perform.’

‘I know I don’t post a lot about gymnastics, but I have my reasons. Behind the scenes there were so many egregious things that I went through on the road to my 2nd games,’ she wrote in the caption.

‘I went through hell x2 and I lost my joy, I lost my passion, my fire, my love, and then myself. There are still so many things that have been left in the dark, hidden,’ she continued.

Gabby Douglas, 26, shared on Instagram on Sunday that she is taking a break from social media to focus on her mental health 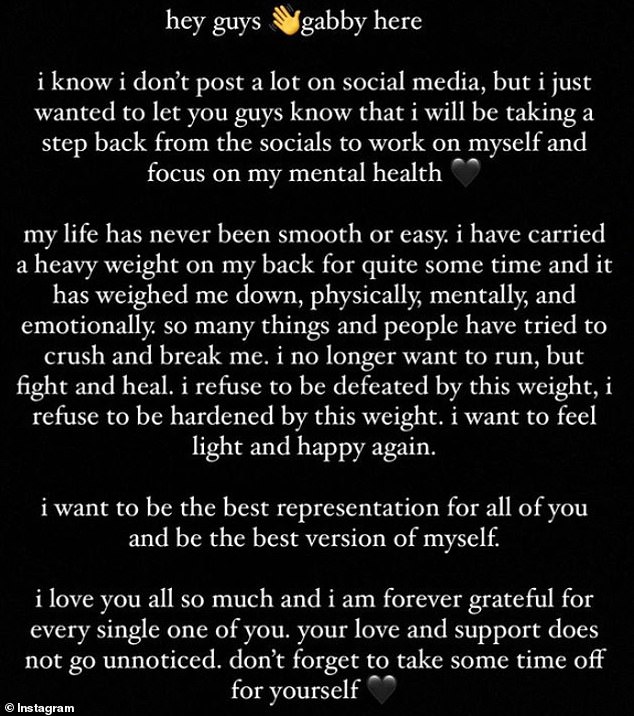 ‘My only goal in life is to help and inspire and my only desire is that people will only spread love bc you never know what someone is going through that you cannot see.’

The three-time Olympic gold medalist concluded her post by thanking her fans, writing: ‘I love you all so much and I am forever grateful for your love, kind words, support, and love.’

Douglas was one of the hundreds of female gymnasts who were sexually abused by Nassar, a former USA Gymnastics and Michigan State University doctor.

The athlete, who was the first African American to become the Olympic individual all-around champion, has also faced intense scrutiny on social media.

She was infamously bullied over her hair, her facial expressions while watching her teammates, and not placing her hand on her heart during the national anthem at the 2016 Olympics.

On Sunday, Douglas returned to Instagram to share that she would be taking some time away from social media.

‘I know I don’t post a lot on social media, but I just want to let you guys know that I will be taking a step back from the socials to work on myself and focus on my mental health,’ she wrote.

‘My life has never been smooth or easy. I have carried a heavy weight on my back for quite some time and it has weighed me down physically, mentally, and emotionally, so many things and people have tried to crush and break me. 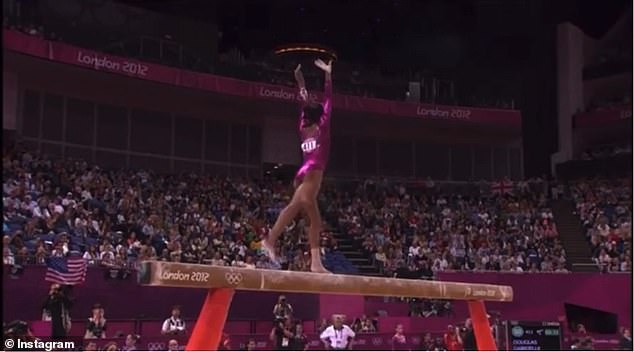 A few days before, Douglas had posted a compilation video of herself performing a full-twisting back tuck on the balance beam, writing: ‘I know I don’t post a lot about gymnastics, but I have my reasons 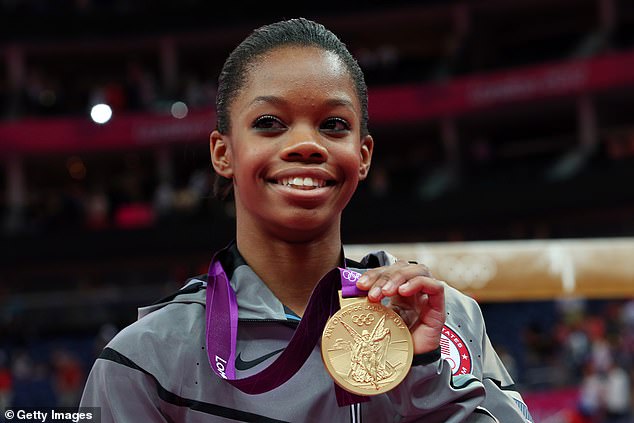 ‘I want to be the best representation for all of you and be the best version of myself. I love you all so much and I am forever grateful for every single one of you, your love and support does not go unnoticed. Don’t forget to take some time off for yourself.’

Douglas has never officially stated that she has retired from gymnastics, but she hasn’t competed since the 2016 Olympics.

In 2017, she publicly shared that she was one of Nassar’s victims after being accused of victim shaming her Final Five teammate Aly Raisman, who was also abused by the disgraced doctor.

The backlash came after she responded to a lengthy post from Raisman about victim shaming following the allegations about Nassar’s abuse.

‘Just because a woman does a sexy photoshoot or wears a sexy outfit does not give a man the right to shame her or not believe her when she comes forward about sexual abuse,’ she wrote.

Douglas then responded: ‘However it is our responsibility as women to dress modestly and be classy. Dressing in a provocative/sexual way entices the wrong crowd.’

Their fellow teammate Simone Biles lambasted Douglas for her irresponsible comments amid the abuse scandal.

‘Shocks me that I’m seeing this but it doesn’t surprise me… honestly seeing this brings me to tears bc as your teammate I expected more from you & to support her,’ Biles wrote. 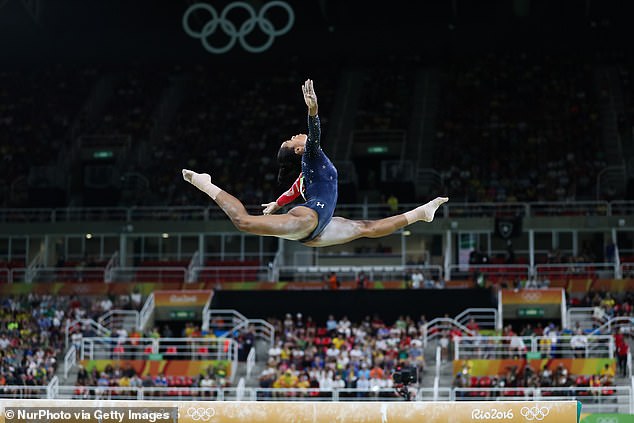 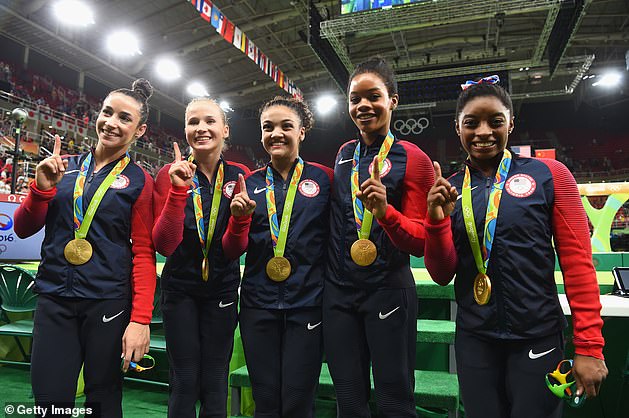 The three-time Olympic gold medalist (pictured with her Final Five teammates) recalled how she ‘went through hell,’ saying: ‘There are still so many things that have been left in the dark’

Douglas then deleted the offending tweet and quickly sent out an apology: ‘I didn’t correctly word my reply & I am deeply sorry for coming off like I don’t stand alongside my teammates,’ she said.

‘Regardless of what you wear, abuse under any circumstance is never acceptable. I am WITH you. #metoo’

Douglas then came forward to say that she, too, was one of Nassar’s victims.

‘I didn’t publicly share my experiences as well as many other things because for years we were conditioned to stay silent and honestly, some things were extremely painful,’ she wrote in the social media statement. 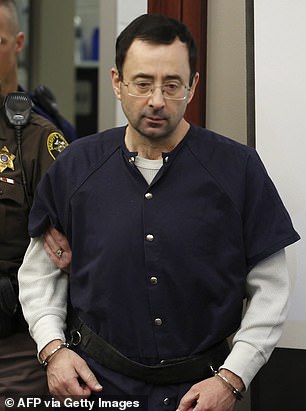 Douglas was one of the hundreds of female gymnasts who were sexually abused by Nassar, a former USA Gymnastics doctor

‘It would be like saying that because of the leotards we wore, it was our fault that we were abused by Larry Nassar.’

She went on to share her support for Raisman, as well as her Fierce Five teammate, McKayla Maroney, who also shared that she was a victim.

‘I didn’t view my comments as victim shaming because I know that no matter what you wear, it NEVER gives anyone the right to harass or abuse you,’ she added. ‘I wholeheartedly support my teammates for coming forward with what happened to them.’

Douglas is among the 90 athletes who are seeking more than $1 billion from the FBI for failing to stop Nassar.

There’s no dispute that FBI agents knew in 2015 that Nassar was accused of molesting gymnasts, but they failed to follow through with mandatory investigative duties, leaving him free to continue to target young women and girls for more than a year.

‘Even minimal compliance with these mandatory duties would have prevented the harm to Claimants and the other women and children Nassar assaulted between July 28, 2015 and September 12, 2016,’ read one of the lawsuits provided to DailyMail.com by the plaintiffs’ attorney.

Plaintiffs are seeking varying amounts in damages, but the total claim is more than $1 billion, according to their attorney, John Manly.

Under federal law, a government agency has six months to respond to the tort claim. Lawsuits could follow, depending on the FBI’s response. The lawsuit came two weeks after the Department of Justice’s decision not to prosecute former FBI agents accused of botching the agency’s 2015 investigation into the disgraced physician. 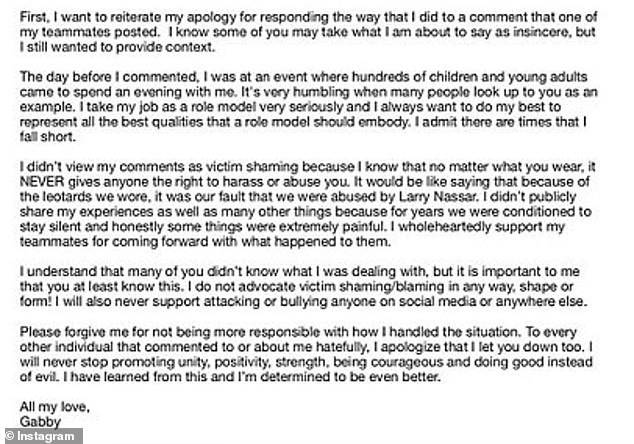 In 2017, Douglas publicly shared that she was one of Nassar’s victims after being accused of victim shaming her Final Five teammate Aly Raisman, who was also abused by the doctor 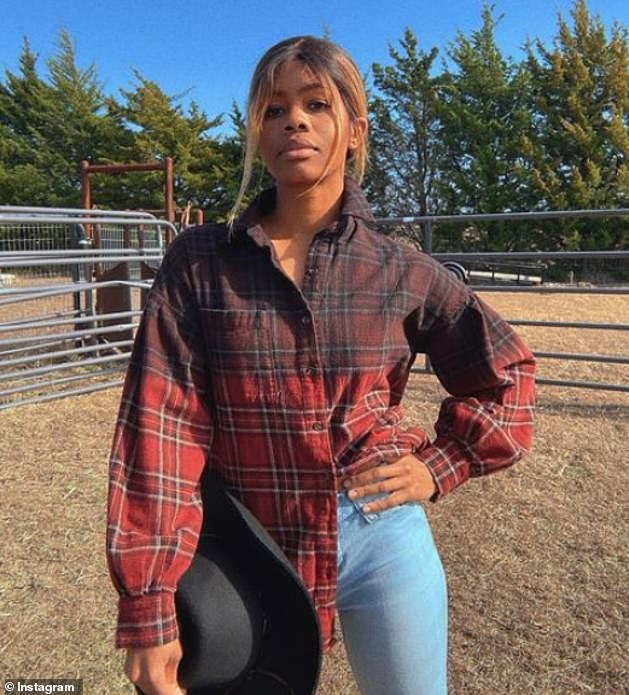 Douglas has never officially stated that she has retired from gymnastics, but she hasn’t competed since the 2016 Olympics

The approximately 90 claimants include gold medalists Biles, Raisman, and Maroney, according to Manly, Stewart & Finaldi, a California law firm.

‘My fellow survivors and I were betrayed by every institution that was supposed to protect us — the US Olympic Committee, USA Gymnastics, the FBI, and now the Department of Justice,’ Maroney said in a statement. ‘It is clear that the only path to justice and healing is through the legal process.’

‘It is time for the FBI to be held accountable,’ agreed Maggie Nichols, a national champion gymnast at Oklahoma.

Hundreds of women and girls, mostly gymnasts, said Nassar molested them during visits for hip, back, and leg injuries.

‘If the FBI had simply done its job, Nassar would have been stopped before he ever had the chance to abuse hundreds of girls, including me,’ said former University of Michigan gymnast Samantha Roy.

Indianapolis-based USA Gymnastics told local FBI agents in 2015 that three gymnasts said they were assaulted by Nassar, a team doctor. But the FBI did not open a formal investigation or inform federal or state authorities in Michigan, according to the Justice Department’s inspector general, an internal watchdog.

Nassar wasn’t arrested until the fall of 2016 during an investigation by Michigan State University police. 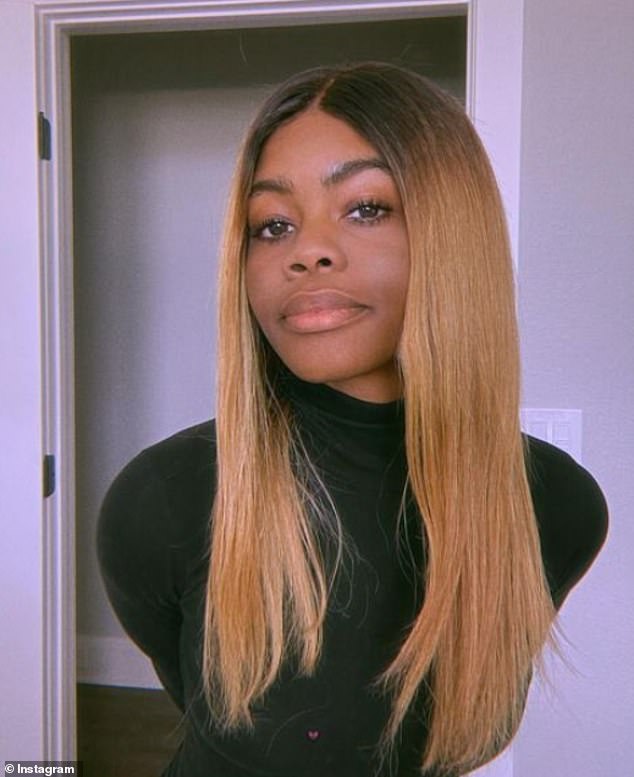 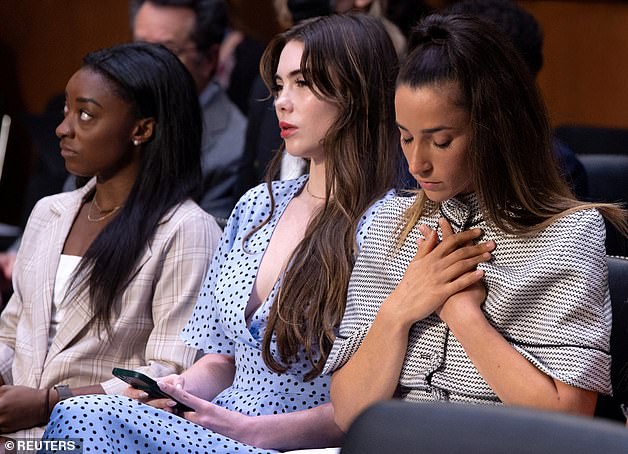 Other claimants include her former Olympic teammates Simone Biles, McKayla Maroney, and Aly Raisman (left to right), according to Manly, Stewart & Finaldi, a California law firm

The FBI declined to comment in April when a smaller batch of claims was filed, referring instead to Director Christopher Wray’s remarks to Congress in 2021.

‘I’m especially sorry that there were people at the FBI who had their own chance to stop this monster back in 2015 and failed. And that’s inexcusable,’ Wray told victims at a Senate hearing.

The FBI fired an agent; another one retired. The FBI has also adopted recommendations by the inspector general.

Lawyers for Nassar’s victims have said more than 100 young women or teens were assaulted after the FBI became aware of allegations against him.

Attorney John Manly said in May it’s ‘incomprehensible’ that agents and others were not prosecuted.

‘The FBI agents who knew of Nassar’s abuse, did nothing, and then lied about their inaction in violation of their sworn duty and the law have been given a pass,’ Manly said.

Michigan State University, which was also accused of missing chances over many years to stop Nassar, agreed to pay $500 million to more than 300 women and girls who were assaulted. USA Gymnastics and the U.S. Olympic and Paralympic Committee made a $380 million settlement.