He netted FOUR goals against Watford, but will that be enough for Gabriel Jesus to start for Man City against Real Madrid? And could he even play at RIGHT BACK with Kyle Walker and Joao Cancelo out?

The black marker pen came out inside Manchester City’s dressing room, all of them scribbling messages on Gabriel Jesus’s match ball. Ruben Dias simply wrote ‘Gabrielaaa’. One of the others read ‘Vamos, Pele!’.

High praise, and something accidentally poetic, in mentioning the name of a man ridiculously obsessed with the legacy of his goal record for someone who regularly battles introspection.

Clutching that ball as he bounded out of the Etihad’s front doors, on a day he took his season’s Premier League tally from three to seven, Jesus looked refreshed.

There is a lot going on with him at the moment – he may not be in Manchester for too much longer – but this was an afternoon he could motion up to his private box in celebration at a hat-trick and take the plaudits from a peppy Bernardo Silva at full-time.

And he will look ahead to tomorrow’s Champions League semi-final against Real Madrid fancying himself to be in Pep Guardiola’s XI.

Jesus often sits on the bench but then often gets called upon for really big occasions. His crowning performances in a City shirt both came against Real in 2020, particularly when debuting in a disciplined left-wing position during a statement victory at the Bernabeu.

He is selfless and happy to play anywhere, so much so that he is apparently a wildcard option to start at right back in the absence of Joao Cancelo and Kyle Walker tomorrow. 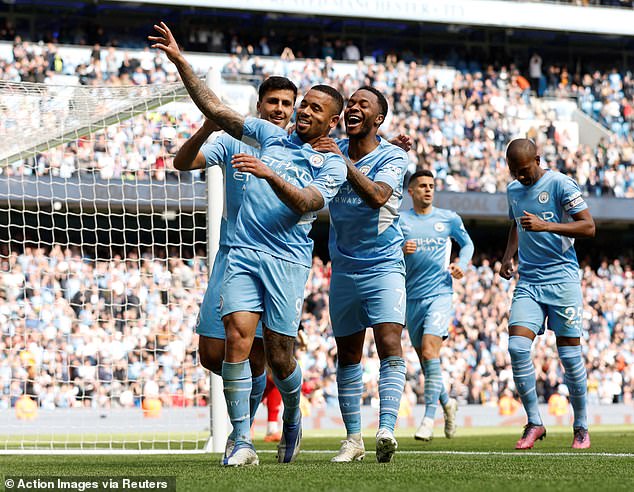 He does much more for this team than merely score goals, which he has not done enough for someone with his talent, obvious when fluffing a one-on-one against Liverpool in the FA Cup this month.

‘Sometimes you (look back on) performances because of the goals, but sometimes you don’t score goals and play well,’ said Jesus, summing up himself perfectly. ‘But I am a striker, so it doesn’t matter if I play good, people are going to see the stats. I’m playing for a big club so everyone expect goals. I try. I work.’

He really does and City will be going some to find an individual who puts in quite this much emotional effort for the cause. ‘If Gabriel had to play right back, he’d play right back,’ said Guardiola.

The word around City is that Jesus is open to proving his worth as a central striker elsewhere, especially with the expected arrival of Erling Haaland. Losing his place in Brazil’s team in a World Cup year is weighing heavy too but here came four goals in front of national team staff. 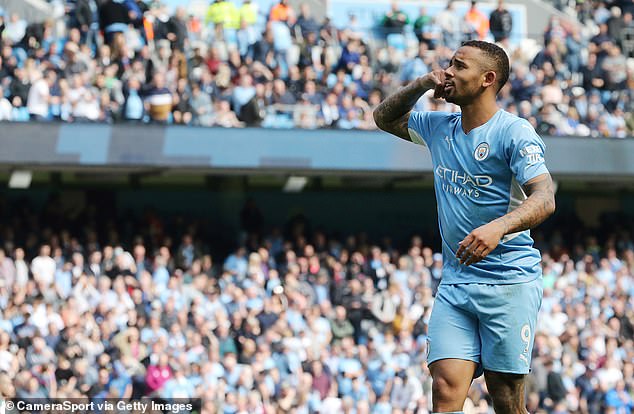 Mikel Arteta, Guardiola’s former assistant, is keen to take him to Arsenal. All of that was quashed after this victory though, Jesus saying: ‘It’s not time to think about this.

‘Now is the best moment of the season. I want to enjoy it, to keep focused with my team-mates to fight for the Premier League. I’ve won it three times. I know how that feels and I want to have that feeling again. We have a tough game against Real Madrid and that is now the focus.’

Forget Haaland, there is another striker on City minds — Karim Benzema, with 44 goals in 47 games this season, is in town tomorrow.

‘This guy is amazing,’ City midfielder Rodri said bluntly. ‘Every game he not only scores goals but makes his team feel comfortable with the ball.’ 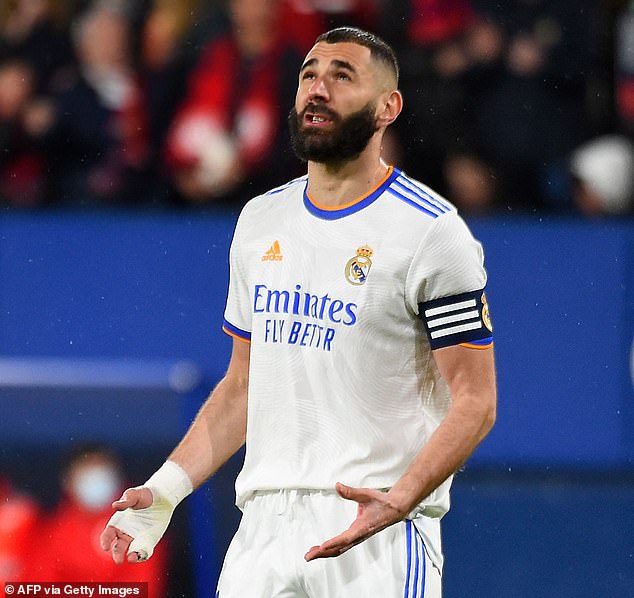 Karim Benzema, with 44 goals this term alone, is now at the forefront of City’s minds

Tiredness has been a hot topic for Guardiola of late and fatigued limbs have been a worry for the players.

‘Maybe after the FA Cup match I felt the team were a bit weak and tired, but not against Watford,’ added Rodri. ‘It makes me hope the team is going to be good.

‘You see leagues and they are almost done but here we are still fighting. Liverpool and us are going to the end.

‘We must be calm and mentally strong in bad moments. I think we are better (than Real) but we have to show it.’