Gabrielle Union has leaned onto the support of her husband amid the controversy surrounding being axed from the America’s Got Talent judging panel.

The 47-year-old actress took to Instagram on Friday to share a sweet snap of husband Dwyane Wade, 37, kissing her on the forehead.

She captioned it: ‘Lord, you KNOW I’m tryin… whew and breathe. Support is everything. [heart emoji] @dwyanewade’

The post came hours after she shared a sweet family snap from their Thanksgiving celebration.

Gabrielle looked radiant in a summery yellow co-ord as she posed alongside stepson Zion, 12, and husband Dwayne Wade, who cradled their daughter Kaavia.

The Bring It On star also tweeted: ‘So many tears, so much gratitude. THANK YOU! Just when you feel lost, adrift, alone … you got me up off the ground. Humbled and thankful, forever.’ 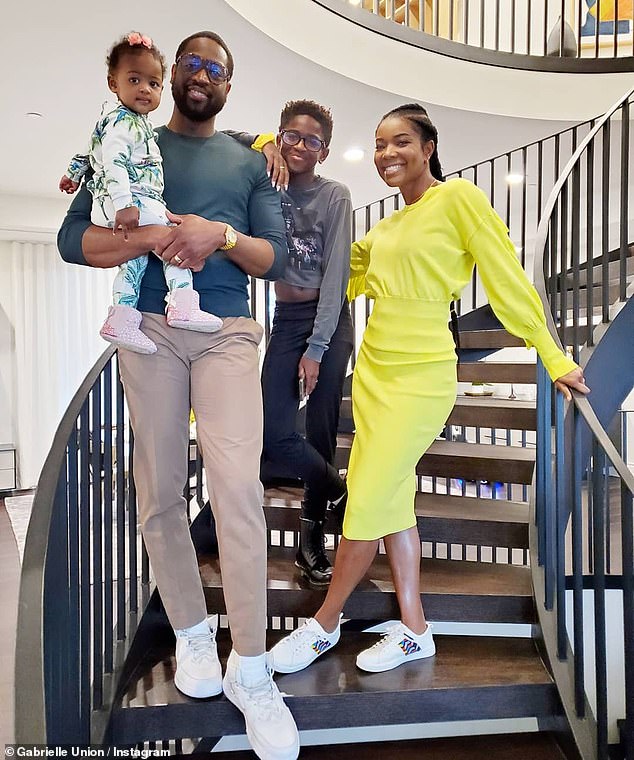 Grateful: The post came hours after she shared a sweet family snap from their Thanksgiving celebration 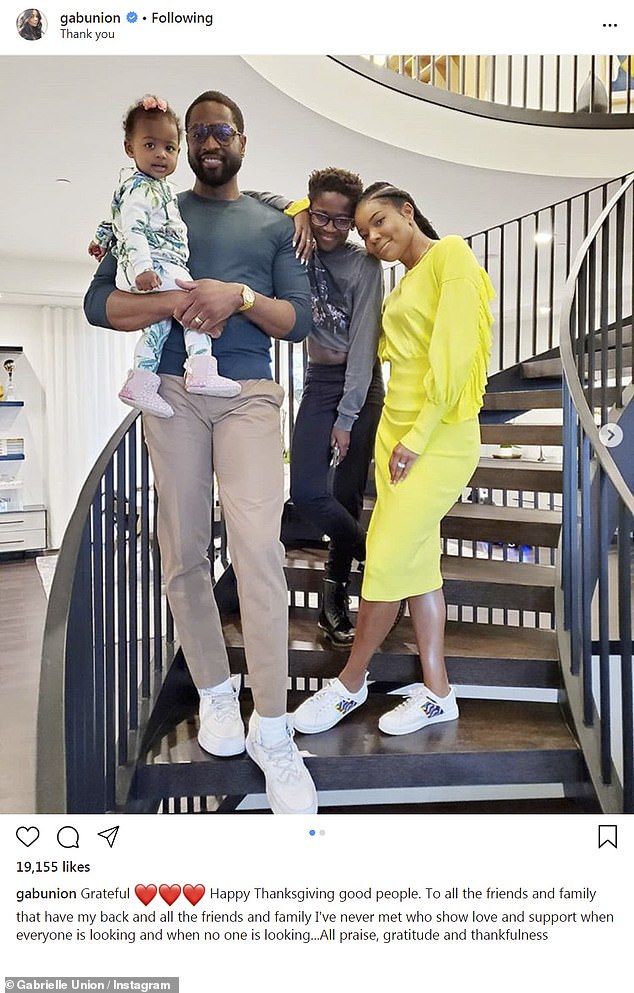 Radiant: Gabrielle looked radiant in a summery yellow co-ord as she posed alongside her family after being axed from America’s Got Talent

Heartfelt thanks: Gabrielle reached out to her followers to thank them for their love and support during her difficult time 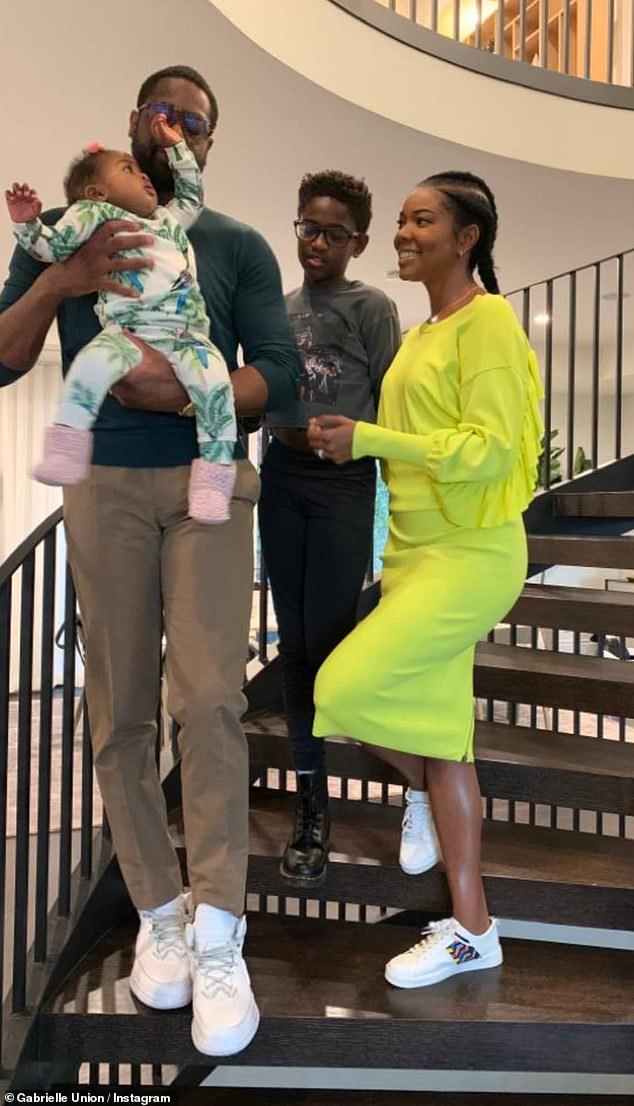 Center of the universe: he family shared a light moment when one-year old son Kaavia needed some extra attention

The posts came after it was reported last month that Gabrielle and Julianne Hough would not be returning to America’s Got Talent, amid rumors that there was a ‘toxic’ atmosphere on set.

Gabrielle had apparently raised issues about racist jokes and comments about her physical appearance. It’s not yet known what is behind the exit of Julianne, 31.

However, Julianne denied the rumors, insisting that she had a ‘wonderful time’ on the show. 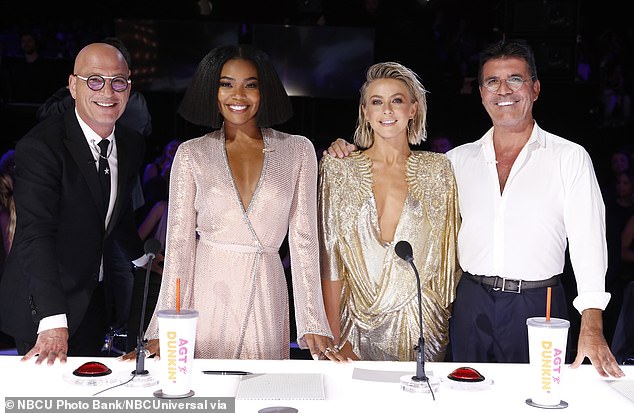 The way they were: Howie Mandell, Gabrielle Union, Julianne Hough and Simon Cowell on the AGT panel. Gabrielle and Julianne have been axed amid rumors of a ‘toxic’ atmosphere on set 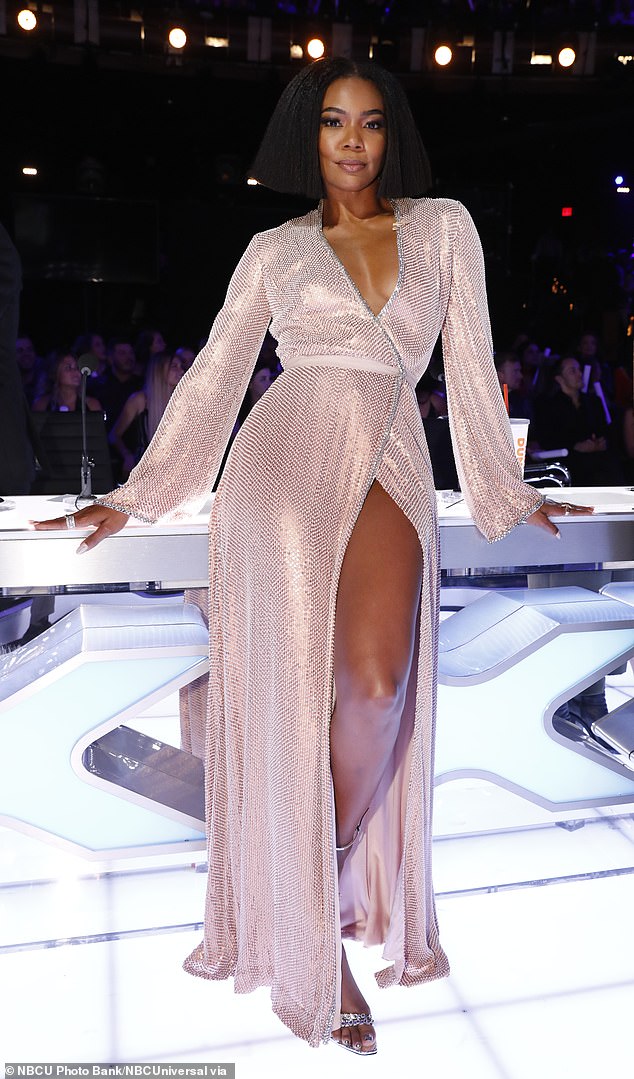 Glittering star: The 47-year-old has revealed she felt ‘lost and alone’ after being dropped from the judging panel

She said: ‘I had a wonderful time on America’s Got Talent, I loved working with the cast, crew and producers. I am happy to continue my working relationship with NBC.’

Gabrielle reached out on Twitter after her husband of five years, NBA star Dwayne Wade, took to social media to defend her. The couple share one-year-old daughter Kaavia.

He said: ‘Men lie, Women lie, numbers don’t. Over this past year I’ve been approached by many people saying that my wife @itsgabrielleu is the main reason they’ve started watching #AGT or that they love her insight and sincerity on the show.

‘So when i got the news that my wife was being fired my first question was obviously why!? I am still waiting on a good answer to that question.

‘But if anyone knows @itsgabrielleu or have heard of her you know she’s an advocate for our community and culture.’

And he also praised his wife for standing up for the values she teaches Kaavia.

“As proud as i were of her being selected as a judge on #AGT— I am even more proud of her standing up for what she stands for and that’s US.

‘So to you @itsgabrielleu on not losing sight of the lessons we’ve talked about teaching our daughter and for kicking a** while you were on that platform. Number 1 judge on one of the biggest shows in the world.’

On Tuesday, Variety reported that sources had said that Gabrielle had expressed concerns over racially insensitive situations, including a joke guest judge Jay Leno allegedly made that was later edited out of the episode.

She and Julianne had also received ‘excessive notes’ on their physical appearance, according to the report.

A spokesperson for NBC and production company Fremantle responded to the claims with a statement on Tuesday to People, saying: ‘America’s Got Talent has a long history of inclusivity and diversity in both our talent and the acts championed by the show.

‘The judging and host line-up has been regularly refreshed over the years and that is one of the reasons for AGT’s enduring popularity. NBC and the producers take any issues on set seriously.’