Gadgets that can help you lose weight tested

Kitchen Safe (pictured) costs £44.95 from Amazon and is one of the weight-loss gadgets that we tested

Eating better and exercising more were this year’s most popular New Year resolutions, according to a YouGov poll.

Yet few of us expect to stick to our good intentions: a Bupa survey found that half us think we won’t actually achieve our 2018 goals, weight loss or otherwise.

So if we can’t trim down with willpower alone, might a weight-loss gadget help? From cords that tie round your waist to high-tech headsets, there are lots of products that claim to help reduce your calorie intake.

But do they work? Dr Ian Campbell, an obesity specialist and a Nottingham-based GP reviewed a selection, then we rated them.

LOCK UP YOUR SNACKS

If you are struggling to resist your favourite food, or have already eaten too much, you can lock it away in this safe for later.

Available in three sizes, the Kitchen Safe looks a bit like a Tupperware box and has a timer on the lid you can set (for between one minute to ten days) and then press to lock.

The safe cannot be opened until the time has elapsed — it works in a similar way to pet food timer feeders. A digital display counts down the time remaining until you can retrieve your treat.

VERDICT: In theory this provides a good way of limiting access to fattening foods, but there will always be other things to snack on. It doesn’t encourage the active self-discipline we need to resist the temptation around us. 7/10 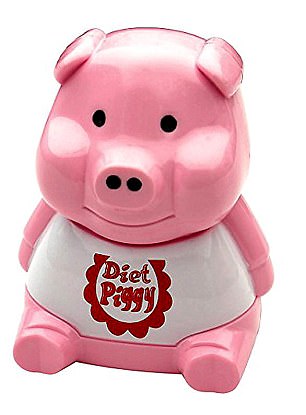 Diet Piggy is £7.49 from Amazon and is a pig that ‘stops you pigging out’

Pitched as ‘the pig that stops you pigging out’, this battery-operated plastic pig (top right) sits on the shelf of your fridge, or inside a cupboard where you store food you want to eat less of, such as crisps and biscuits.

It has a light-activated sensor which means when you open the door of the fridge or cupboard, you’ll be greeted with a loud ‘oink oink’ until the door is shut again.

VERDICT: It’s harmless and fun, but will have no meaningful effect on food intake or weight loss. 2/10 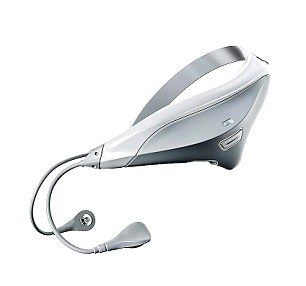 Developed by doctor and neuroscientist Jason McKeown, at the University of California, this headset is designed to stimulate the vestibular nerve behind the ear. This, in turn, activates a part of your brain called the hypothalamus, an area that helps regulate appetite and metabolism.

The maker claims that wearing the device while sitting for an hour a day helps reset your ‘set point’ (the weight your body likes to ‘settle’ at) by stimulating the production of the hormone leptin, which helps curb hunger.

It also says the brain registers the nerve stimulation as calorie-burning physical activity. However, some say the device can cause an unpleasant swaying sensation.

VERDICT: At first glance, the information about this gadget makes a lot of sense, but the ‘set point’ is just a theory. There’s no peer-reviewed evidence to back up the claims. One small study showed 15 subjects who used this for 16 weeks saw a 2 to 14 per cent reduction in abdominal fat, but I’ve read nothing to really prove to me that Modius works. It’s expensive, too. 5/10 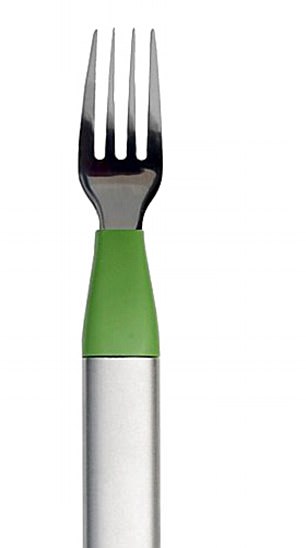 This electronic fork aims to slow down your eating, and the maker cites research saying that slower eaters consume 11 per cent fewer calories at a meal.

A sensor counts each movement of wrist to mouth and vibrates and flashes red if you leave less than ten seconds between bites. It links via Bluetooth to an app that will give you feedback and helps you track meal duration and number of bites over time.

VERDICT: There’s enough evidence to support the idea that slower eating helps reduce calorie intake; it creates mindful eating habits and gives the brain extra time to receive the ‘I’m full’ message from the stomach, so the theory makes sense. The device may well help you eat less, but people can get bored with such things. 8/10 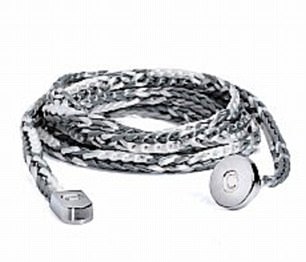 You secure the unstretchable, hard-wearing polyester cord around your tummy with a button, making it the right size for you (the manufacturer provides comprehensive advice about how to do this).

Essentially you wear it so it feels quite snug before you eat. The downside is that you can just remove or resize it to cheat.

VERDICT: There’s no evidence presented for the claims that it helps you lose weight, and no way this could reliably and consistently guide anyone as to how much they’ve eaten. Fullness isn’t just about tummy girth, it’s also about blood sugar levels and hormone changes. 1/10 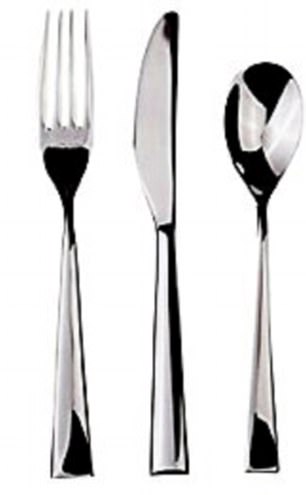 This stainless steel knife, fork and spoon set is a reduced size — the amount you can fit on the head of the fork or scoop with the spoon is about half the normal amount, forcing you to take smaller mouthfuls.

Created primarily to help people who have had weight-loss surgery and cannot fit much food in their stomach, the maker says the cutlery also encourages mindful eating (where you savour food). It is claimed that this cutlery is more suited to adults than simply using a child-size knife and fork, because it’s shaped and weighted to feel comfortable in larger hands.

VERDICT: This reduces how much food you can eat in a given time, which means your meal may take the 20 or so minutes needed for messages saying you are full to pass to the brain. I can also see how it might promote more mindful eating. However, cutlery can’t help with hand-held snacks, which is often where excess calories are consumed. 7/10

NOT TO BE SNIFFED AT 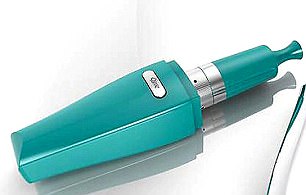 Slissie costs £29.99 and gives you a burst of calorie-free flavour when you suck on it and it comes in different flavours

This small, mascara-sized rechargeable device delivers a burst of calorie-free flavour when you suck on it.

The cartridges, which you buy separately, have different flavoured liquids inside, such as chocolate or mint. The idea is you suck in a mist of the flavour when you crave a sweet snack.

The maker claims the aromas from the flavour are sensed by smell receptors in the nose, conveying satiety messages to the appetite control centre of the brain, reducing sugar cravings.

VERDICT: This is an interesting product, but I need more convincing. The maker produces some research evidence that smelling foods can cause weight reduction, but unfortunately the research did not use the Slissie product. 7/10 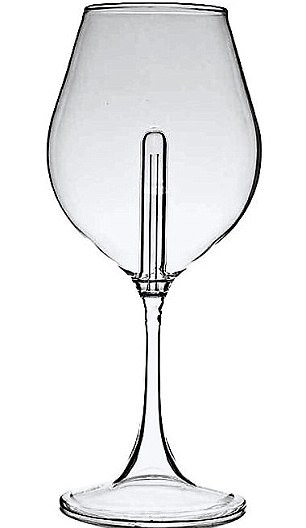 Modelled on an invention by Pythagoras made around 2,500 years ago, the secret of this ‘civilised’ glass is the siphon structure in the middle.

When you keep the level of wine in the glass below the top of the siphon (a maximum of approximately 250ml, or a third of a bottle of wine), all is well.

However, if you pour above this, every drop of wine drains out through a hole in the bottom, onto your lap or whatever surface is below.

VERDICT: A bit of fun, maybe, but would it help you lose weight? Not a chance. Best not to try it while in your best clothes.

The best strategies to cut down on alcohol, and the calorie content in it, are to use small glasses, not accept top-ups, and intersperse alcoholic drinks with water. 2/10

You switch this bite counter watch on at the beginning of each meal and it measures hand-to-mouth wrist roll motion, and hence the number of mouthfuls taken. 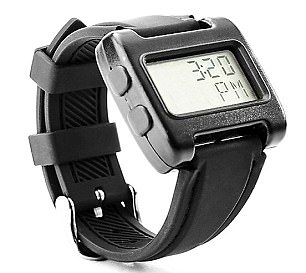 You get a reading of the number of bites taken and you can set an alarm to sound if you take more or fewer bites than you need. The two professors who invented it at Clemson University in the U.S. say research suggests around 100 bites a day is ideal for weight loss for most people.

However, you find your own bite goal by using the watch to monitor your normal intake for two weeks, then shaving off 10 to 20 per cent of the bites.

The watch has a pedometer built in, too — hence ‘eat less, move more’, which ELMM stands for. The bite counter can also be downloaded as a free app by Apple Watch owners

VERDICT: In a small study with children, using this bite counter did lead to some weight loss, so there may be some substance to this device. There’s plenty of evidence that slower eating can help reduce total calorific intake.

However, I remain to be convinced that solely counting bites will result in meaningful, long-term weight loss. 8/10

BRACELET GIVES YOU AN ELECTRIC SHOCK 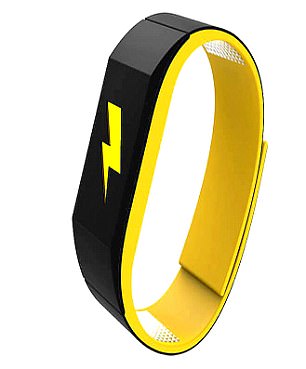 The Pavlok shock wristband costs £179.99 and delivers an electric shock to the wearer to try and help you avoid ‘undesirable behaviour’

This bracelet is based on aversion therapy, thought to help people to avoid an undesirable behaviour by conditioning them to associate it with an unpleasant stimulus (a shock in this case).

You press the lightning bolt symbol to administer a zap, ranging from mildly unpleasant to painful depending on the intensity you pick (between 50 and 450 volts). The idea is you give yourself a shock if you find yourself picking up unhealthy snacks. The maker says it should change behaviour in five days.

VERDICT: Aversion therapy can help people quit smoking, as smokers can respond quickly to it. Weight loss is more complex. You have to initiate the shock, so it is unreliable. 1/10