Both gaining and losing weight in old age raises the risk of dementia, research suggests.

A study found people over 60 who put on or shed more than 10 per cent of their BMI over two years are 20 per cent more likely to develop the memory-robbing disorder.

Obesity has been linked to inflammation, which may trigger cognitive decline, the researchers claim.

And weight loss may be a sign of another underlying condition which has its own link to dementia, such as heart disease or cancer, they add.

The research was carried out by Kyungpook National University in South Korea and led by Professor Jin-Won Kwon, of the college of pharmacy.

‘Both weight gain and weight loss may be significant risk factors associated with dementia,’ the researchers wrote in the journal BMJ Open.

‘Our results suggest that continuous weight control, disease management and the maintenance of a healthy lifestyle are beneficial in the prevention of dementia, even in later life.’

Dementia is a global health concern that is set to get worse as we continue to live for longer.

Some 46.8million people worldwide had been diagnosed with the condition in 2015, which cost around £642billion ($818billion) that year alone.

Meanwhile, the global prevalence of obesity has increased by more than 100 per cent over the past four decades.

Because dementia is an irreversible, progressive condition, studies have focused on how to prevent it, with many pointing to BMI.

Obesity in middle age has been linked to cognitive decline, however, studies that show how excess weight may cause dementia have been inconsistent.

To uncover how weight change in later life affects someone’s dementia risk, the researchers analysed 67,219 people aged between 60 and 79.

The participants were randomly selected from the National Health Insurance Service-Health Screening Cohort (NHIS-HEALS), which is made up of almost 10 per cent of Koreans.

After an average of five years, 4,887 of the male and 6,685 of the female participants had developed dementia.

Results revealed the men who gained more than ten per cent of their BMI were 25 per cent more at risk of the memory-robbing disorder, while the women’s odds rose by 17 per cent.

And the men and women who lost more than ten per cent of their BMI were 26 and 15 per cent more likely to develop dementia, respectively.

Weight loss may be a symptom of dementia that appears before other symptoms, the researchers claim.

Dr James Pickett, head of research at Alzheimer’s Society, said: ‘Although this research suggests rapid changes to our weight later in life could increase dementia risk, it’s difficult to distinguish between cause and effect.

‘People with early dementia can often report changes in appetite and diet.’

Dr Pickett’s comment suggests people may lose or gain weight because of a change in eating habits brought on by their brain damage, and that the weight change may be a symptom rather than a cause.

Results further revealed a participant’s BMI at the start of the study did not influence their dementia risk, with the exception being underweight men.

Rather, it was the weight change that was important.

Rapid weight gain increases the amount of fat old people store, which is associated with higher markers of inflammation.

However, our BMI does not always accurately reflect our fat distribution.

On top of weight change, high cholesterol and blood pressure were also associated with dementia’s onset.

This may be because they restrict the flow through blood vessels, which could result in a reduced blood supply to the brain.

This in turn could lead to lesions, small areas of dead tissue and cell degeneration in the vital organ. 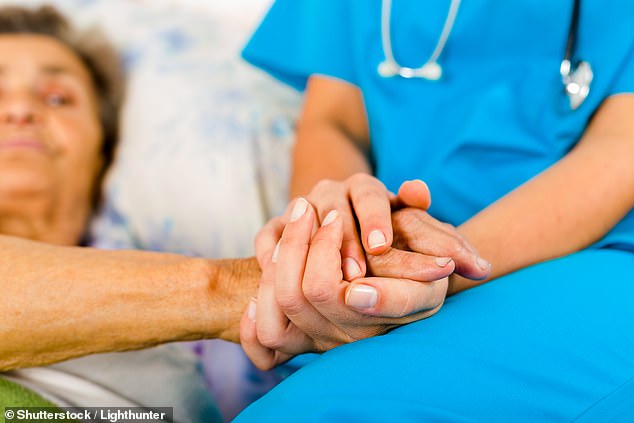 Unhealthy lifestyle habits like smoking were also associated with an increased risk of dementia, while exercising at least three times a week lowered the odds.

Diabetics with high fasting blood-sugar levels were up to 60 per cent more likely to develop the memory-robbing condition.

Perhaps surprisingly, drinking at least three times a week only raised the risk among the male participants. The researchers claim future studies should look at how the type, frequency and amount of liquor affects a person’s dementia risk.

They are also calling for a programme that explains how we can reduce our dementia risk.