A mother has revealed how her awful gambling addiction led to bankruptcy and self-destruction, in a bid to warn others of the dangers of becoming hooked.

Lisa Walker, 48, from Essex, is a Peer Aid support worker, and was first introduced to gambling when her dad and grandad played cards together, but back then she would bet no more than 50p.

Even as a child, she remembers the rush she got from winning something as little as £1. Once she turned 18 and it was legal for her to enter casinos, Lisa’s habit escalated drastically.

A big win in February 2001 became the start of a nightmare that would last two decades.

Lisa Walker from Essex, then aged 29, winning a jackpot of £127,000 at Rendezvous casino in 2001, which she now describes as the worst day of her life 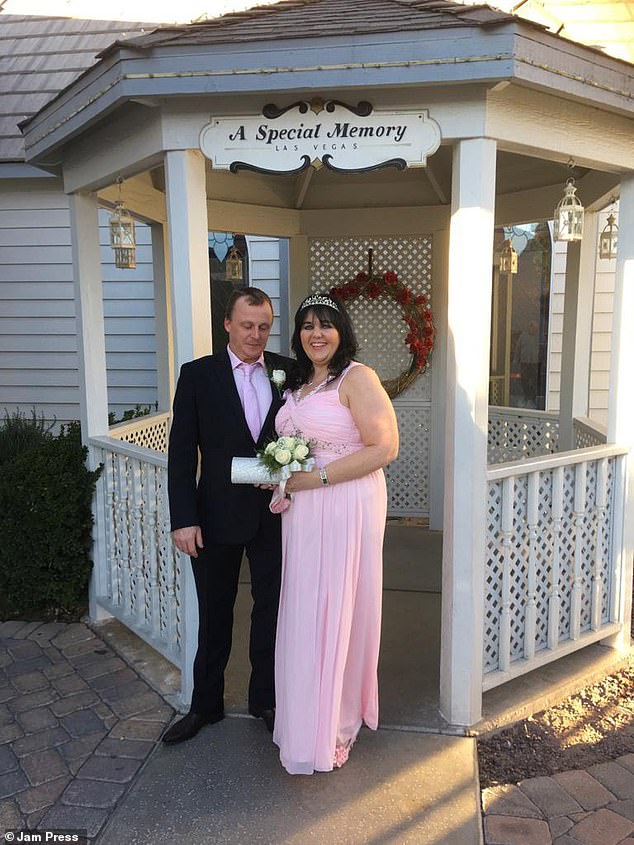 Lisa Walker on her wedding day with husband Garry in Vegas. She said that she spent the wedding night playing slots until 6am instead of spending time celebrating with friends and family

‘My heart was pumping in my chest and all I could think about was how in a couple of minutes every single person in this casino was going to know that I had won that jackpot,’ she recalled.

‘As the dealer slowly unveiled players’ cards, he got to mine and slowly revealed the royal flush.’

‘In a flash, alarms went off, people were screaming, the casino manager ran up to me telling me they’d have to check the cameras right away, and random strangers were running up to me congratulating me.’ 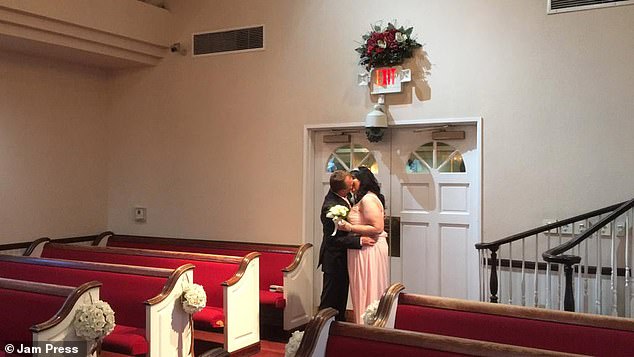 Lisa became mesmerised by the atmosphere in casinos, overwhelmed by the tables and the bright lights and the smartly-dressed people. Pictured: Lisa Walker on her wedding day with Garry

‘What should have been the best day of my life, some 20 years ago, led to a journey of despair, hopelessness, and having an awful, awful gambling addiction.’

Lisa became mesmerised by the atmosphere in casinos, overwhelmed by the tables and the bright lights, the smartly-dressed people and, thanks to the clever design of these spaces, the fact she couldn’t tell what time of day it was.

Her newly-pocketed winnings enabled her to gamble much more frequently, typically four to five times a week.

She said: ‘I became reckless with money.’ 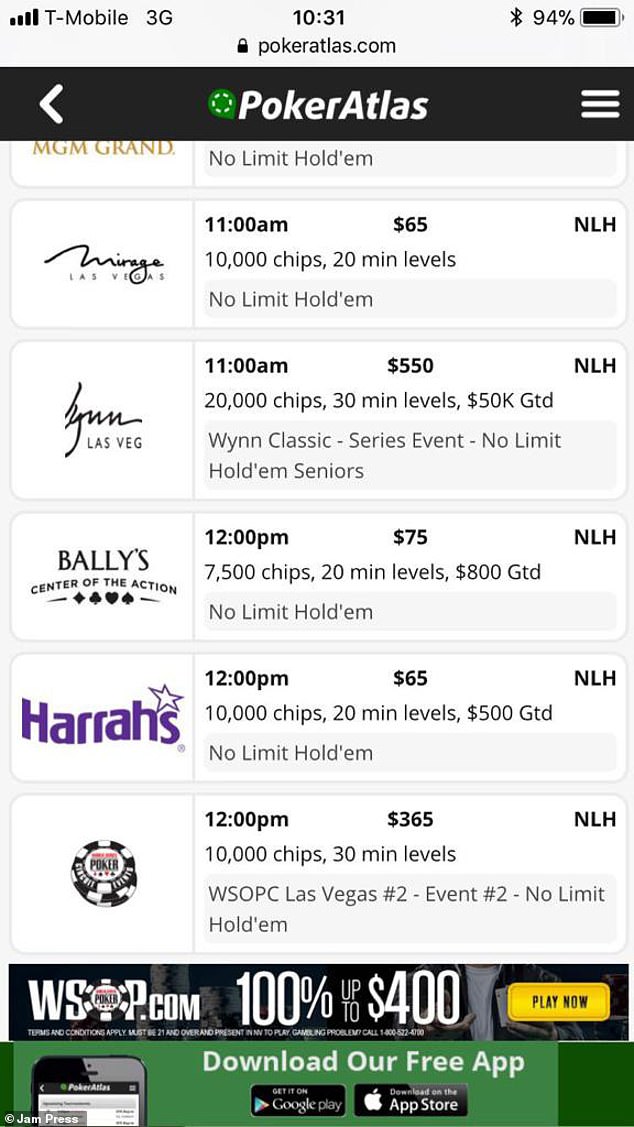 ‘With that came greater hours spent gambling, which I reckon was in the region of around  eight to 10 hours each day.’

‘Whether that was in the casinos, the dog tracks, betting shops, anywhere.’

‘I truly loved it. I loved the buzz it used to give me, but naturally with them came the crushing lows.’

‘That’s what it means to be a compulsive gambler, being truly unable to stop.’

‘Even if I had won £1 million that night, it wouldn’t have mattered because one way or another, every single pound would have gone back to gambling.’

Lisa estimates that she has lost up to half a million pounds over the past two decades.

‘This would be from both losing the large win but also from gambling away the money that I got from re-mortgaging my house, not just once but three times, to continue to have the money to gamble and spent every single penny I had towards gambling.’

The dangerous habit eventually left Lisa in sizeable debt so severe that she was forced to declare bankruptcy and sell off her house to pay it off.

She had previously sold her home but the sale didn’t cover her debts, leaving her account still in the red.

She said: ‘It’s extremely difficult to think about it right now, and to think about all the things I could have had, whether that was my own little house, being debt free, being mortgage-free by the age of 30. 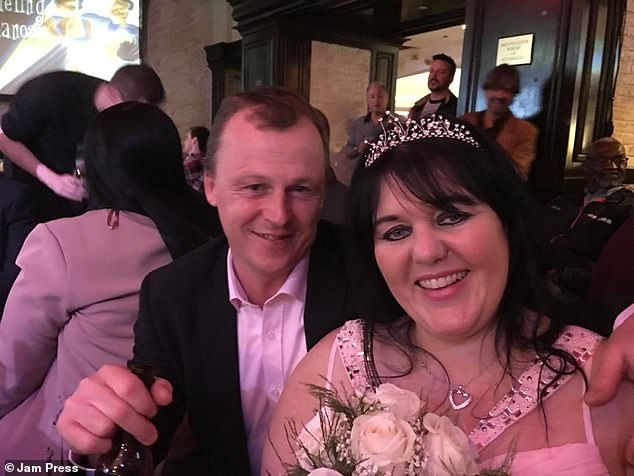 ‘But I didn’t, and instead I chose this life of self-destruction. It was hell, well and truly, hell on earth.’

Gambling also affected the support worker’s health, as she struggled to sleep most nights, lying awake wondering where she was going to get more money to gamble with.

And her relationships suffered, too.

Lisa said: ‘It also resulted in the breakdown of a marriage and ultimately resulted in my children and I being forced to move into a hostel for a period of time.’

It wasn’t until her wedding night in 2018 to her third (and current) husband, Garry, that Lisa realised she desperately needed help. 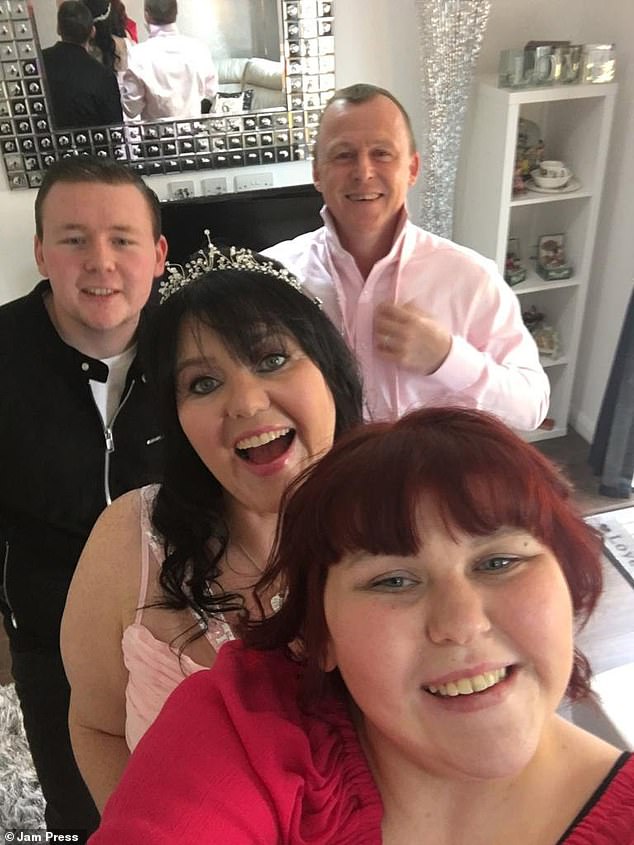 She said: ‘We had decided to have our wedding in Las Vegas and despite 15 of my closest family friends flying over to enjoy the wedding with both me and my husband, I spent the entire night playing the slots till 6am – not leaving for a moment to enjoy their company or to enjoy the celebration.’

‘It was when we returned from Las Vegas that I finally made the conscious effort to reach out and to get help from a close friend from someone that I knew at Gamblers Anonymous.’

Lisa is one of 50,000 women who have now registered to self-exclude from all online gambling sites through GAMSTOP, a free tool for people living in the UK.

Since the pandemic struck, the proportion of women self-excluding through the service has been rising; in March, 26% of all registrants to GAMSTOP were women, which has risen to 31% by September.

An estimated 2 million adults in the UK have an unhealthy relationship with gambling. Here are some tips for when it’s becoming a problem

According to Gamcare, the number of women reporting gambling problems is increasing at double the rate of men, but only 1% of women who experience gambling related harm contact the National Gambling Helpline.

Lisa is sharing her story to raise awareness of the life-altering impact of a gambling addiction and to stop it being seen as such a taboo.

She said: ‘No one ever confronted me about my money problems during my addiction.

‘Problem gambling is a very easily-hidden addiction, unlike drink or drugs.’

‘Obviously with both of them you have signs to look out for.’

Lisa has been in recovery for three-and-a-half years and counsels others who are suffering with similar struggles.

She is also in the process of establishing a women-only group for compulsive gamblers, which she hopes to launch within the coming months.

Lisa added: ‘What I have found is that women don’t feel that they can talk about their addiction, with it often being seen as a male issue.’

‘I have spoken with many women who don’t feel they can go to support meetings, and I find it so upsetting that somebody could feel that way, as though they can’t even seek help.’

‘I hope things change and if we can increase the visibility of women who are recovering in the media that could make a big difference.’

‘To people starting out, I just say be very, very careful. It is a slippery slope.’

‘You can control it and you can put it to bed. It is bloody hard work though.’

‘So if you’re struggling, don’t struggle alone and reach out.’

Speaking about how the pandemic has caused people to turn to gambling, psychotherapist Liz Karter added: ‘The pandemic is creating a perfect storm of triggers for addictive gambling in women: feeling trapped, anxious and depressed, and overwhelmed by families or loneliness.

‘As mental health problems increase so too will addiction to gambling.’

‘I treat young women who are wild with anxiety and stress, and for whom gambling started as self-medication but the end results are always devastating costs to their mental health and finances.’