A bit of Game of Thrones cosplay fun in Central Park turned into a life-changing event when one cosplayer popped the question to another.

The couple were surrounded at the time with about twenty other cosplayers who had come from across the country – and some even from Canada – to participate in the event at the park’s Belvedere castle.

Big surprise: A cosplay photoshoot in Central Park turned into an engagement after Eddie Sutton proposed to his girlfriend Jaclyn Nicole while dressed as Game of Thrones characters 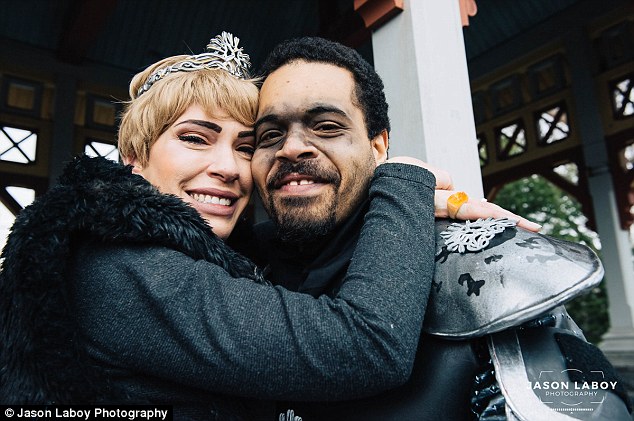 Lots of love: Jaclyn, also known as Casterly Fox, was dressed as Cersei Lannister while Eddie took on the character called The Mountain 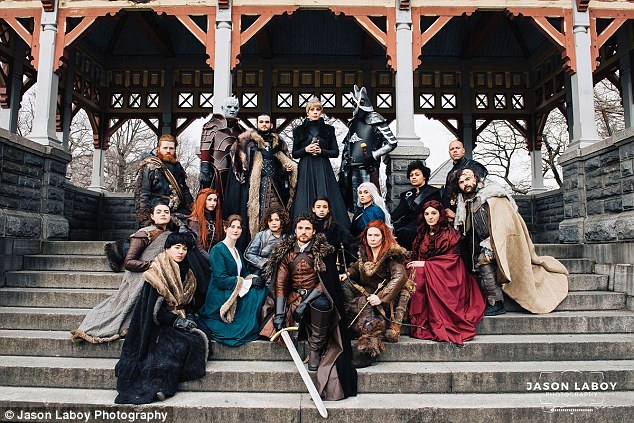 Gathered around: The proposal happened when a large group gathered at Belvedere castle in Central Park New York

While Jaclyn, known also by her cosplay name Casterly Fox, arranged the shoot, photographer Jason Laboy was on hand to capture the big moment.

The photos show the group braving the chilly weather, posing while in character, with Jaclyn putting on her best Cersei scowl as she looks over the others.

The commitment of the cosplayers is clear in their costumes, with full suits of armor,  flowing tunics and fur-lined capes on display.

But when it came to taking the actual photo, Jaclyn’s boyfriend Eddie had other plans. 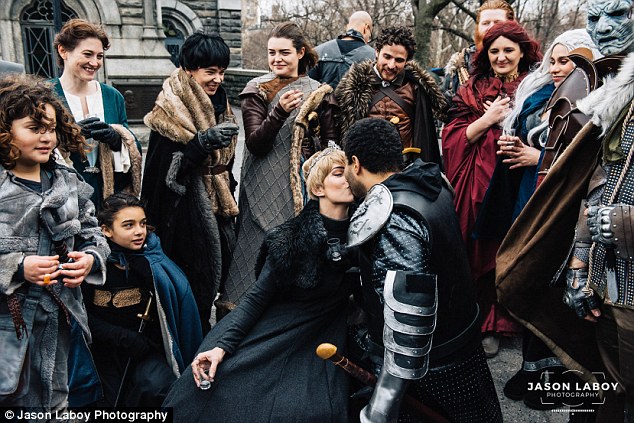 Happy days: The photoshoot had been organized by Jaclyn herself, with cosplayers coming from as far as Canada 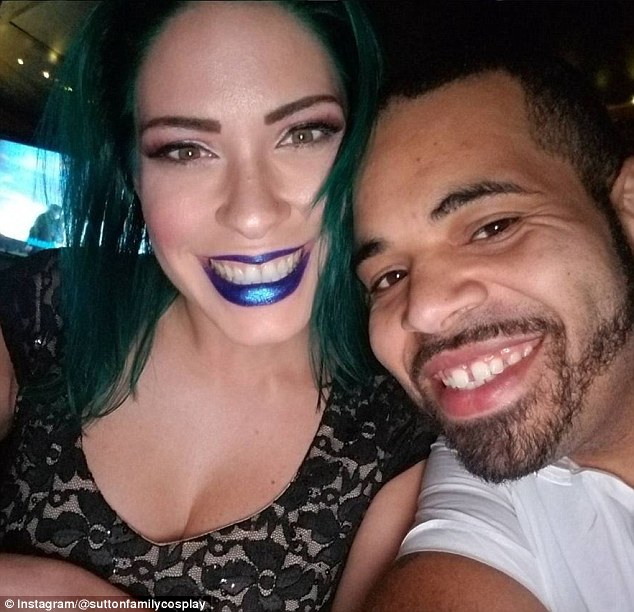 All smiles: The couple’s shared passion and skill for cosplay is on display in their photos 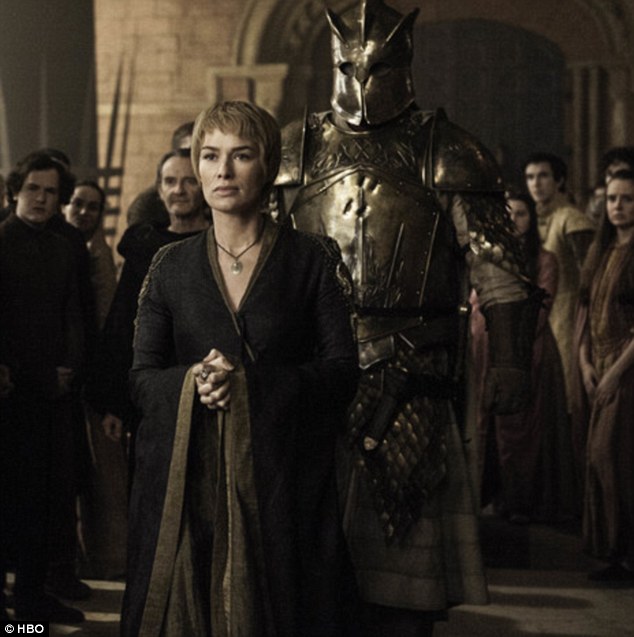 On screeen: The costumes were made to match the looks of Cersei and her hulking bodyguard (pictured) from the popular HBO show

He suggested to the group that they pose for a snap where they are all looking towards Jaclyn’s Queen Cersei and kneeling before her in submission.

After some toing and froing with the rest of the group with the pose, Jaclyn joked that Eddie shouldn’t have to kneel as The Mountain is the queen’s ‘bodyguard.’

But then Eddie removed his helmet and produced the ring, leading a surprised Jaclyn to burst into tears and respond with an emphatic ‘yes’.

Along with the couple’s characters there were a number of Jon Snows, at least one Khaleesi and a handful of Starks thrown into the mix. 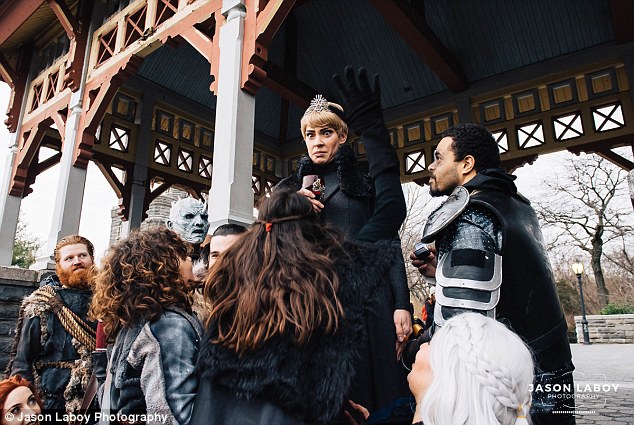 Making the move: Eddie had suggested that everyone face Jaclyn and kneel for one of the images as a ruse, before removing his helmet and producing the ring 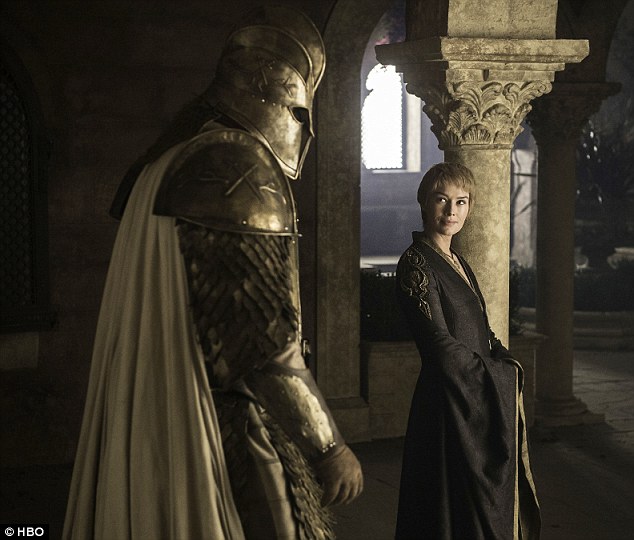 Special relationship: Things almost hit a snag when Jaclyn joked that Eddie shouldn’t kneel because the Mountain is Cersei’s bodyguard 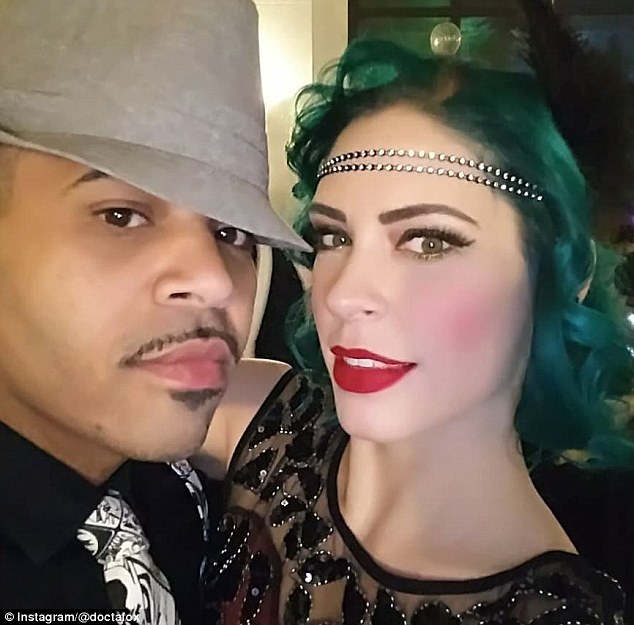 Looking ahead: The couple both shared their special moment with the cosplay community both in person and online

According to BleedingCool.com, Jaclyn explained how she had called for her fellow fans to come together herself, not knowing that she was helping to plan her own proposal.

‘I really just wanted to bring the very best Game of Thrones cosplays together without overlap of characters to get some really nice screen accurate shots!’ she said.

‘We all work so hard on these cosplays, and I really wanted to showcase everyone with the best photographers I could find! I felt that doing this shoot would further strengthen the bond that we already share due to our love of Game of Thrones.’