‘I gave up and pirated it’: Furious Game of Thrones fans slam Foxtel after their stream CRASHED moments after highly-anticipated first episode aired

Foxtel has come under fire from outraged Game of Thrones fans unable to watch the highly anticipated first episode of the eighth and final series.

Monday’s return of the popular HBO series return sparked a social media uproar due to streaming and buffering issues for online viewers, despite Foxtel’s claims most customers watched the show uninterrupted.

One angry customer took a photo of their blank computer screen with the message ‘The service is temporarily unavailable. Please try again later.’

The photo was inundated with comments from disappointed viewers experiencing the same issue.

‘I gave up and pirated it,’ one wrote.

Another added: ‘I’m frustrated that I can’t pay for and watch this. Pirating is easier than paying right now.’ 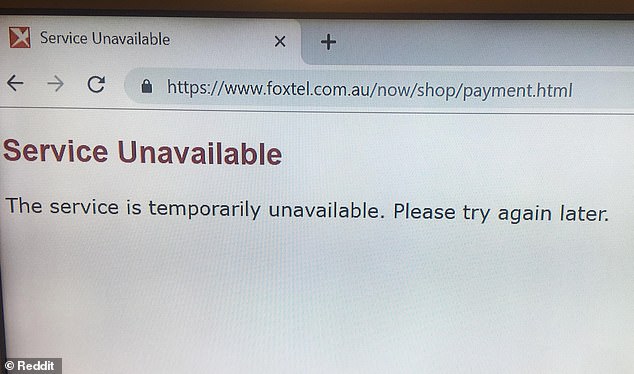 ‘Please fix your streaming services, you should have known the network traffic demand for this series, especially when you are advertising it so hard yourselves. There is no excuses for this. Your silence is very deafening too,’ one fan wrote.

Another added: ‘Foxtel go has crashed again. What a (stuff) up. Think they would have done extensive load testing on their servers considering they were shilling the signup process so hard before the new GOT season – very disappointed.’

Foxtel customers had similar streaming issues when the first episode of the seventh series premiered in 2017.

‘This is so frustrating this happened last season as well. You guys are so incompetent,’ one woman tweeted on Monday night.

Not all viewers were disappointed. 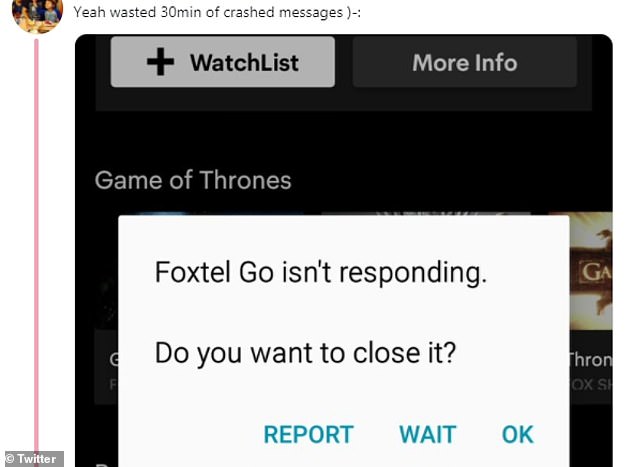 Streaming and buffering issues, along with crashed messages were among the many complaints from outraged Foxtel customers who couldn’t watch Game of Thrones

‘Perfect connection for me, good episode,’ a satisfied customer tweeted.

Another added: ‘Credit where it’s due. Had a real bitter experience with your streaming last GoT season but just streamed S8Ep01 beautifully in HD with CC.’

‘The number of social posts was extremely small and related to a cable outage on the NBN/ Telstra network that was beyond Foxtel’s control as well as customers’ access to MyAccount, our online self-management portal, which had less than 100 social posts related to customers being timed out due to a much higher than normal volume of customers accessing it,’ he said.

‘The evening’s stream of Game of Thrones was not affected.’

Earlier on Monday, fans of the show were warned they faced the prospect of jail if they were caught downloading the highly anticipated final season.

Game of Thrones is regarded as the most pirated show on television with 1.77million Australians illegally downloading the seventh season in 2017.

A survey from finder.com.au found 30 per cent of Australians who watch the show downloaded it illegally.