Game Of Thrones fans took to social media to comment on an epic battle during Sunday’s episode as the Night King and his army marched on Winterfell.

Fans of the HBO show were ready for the fight early as one viewer took to Twitter before the episode aired and posted a photo showing two dozen of the characters including Daenerys Targaryen, Sansa Stark and Tyrion Lannister with votive candles.

The dark caption read: ‘me prepping for tomorrow’.

Twitter reaction: Arya started trending on Twitter after Sunday’s episode of Game Of Thrones that showed the Battle of Winterfell

The Night King arrived at the Godswood to kill Bran Stark, but Arya ambushed and killed him with a Valyrian steel dagger and his undead army collapsed.

Arya started trending high on Twitter as fans rejoiced over her heroic move.

One Twitter user asked others to retweet ‘if you are in love with Arya’ as fans embraced the character played since 2011 by English actress Maisie Williams, 22 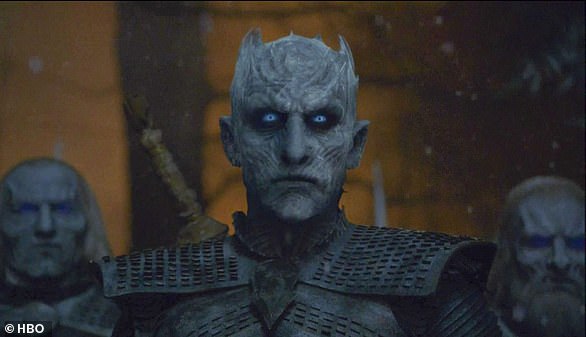 Army leader: The Night King and his army arrived at Winterfell on Sunday’s episode of the hit HBO show 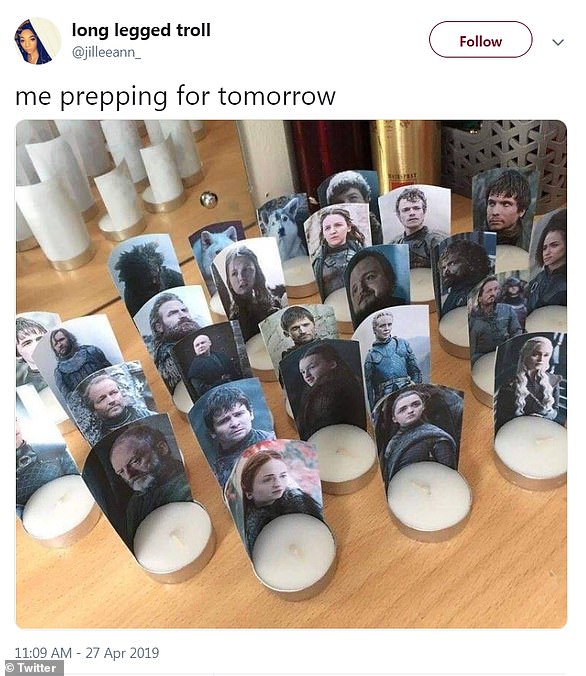 Getting ready: A fan on social media was ready for the upcoming epic battle against the Night King with votive candles dedicated to two dozen characters

Another shared a photo of the character as a younger girl and captioned it: ‘Arya is the real MVP’.

Arya using her Valyrian steel dagger to kill the Night King also drew a comparison to NBA player Damian Lillard, 28, whose 37-foot, game-winning 3-pointer at the buzzer last week for the Portland Trail Blazers was the dagger that ended the Oklahoma City Thunder in the playoffs.

A tweet that read ‘Arya Stark:’ was followed by a photo of Lillard after his game-winning, series-clinching dagger. 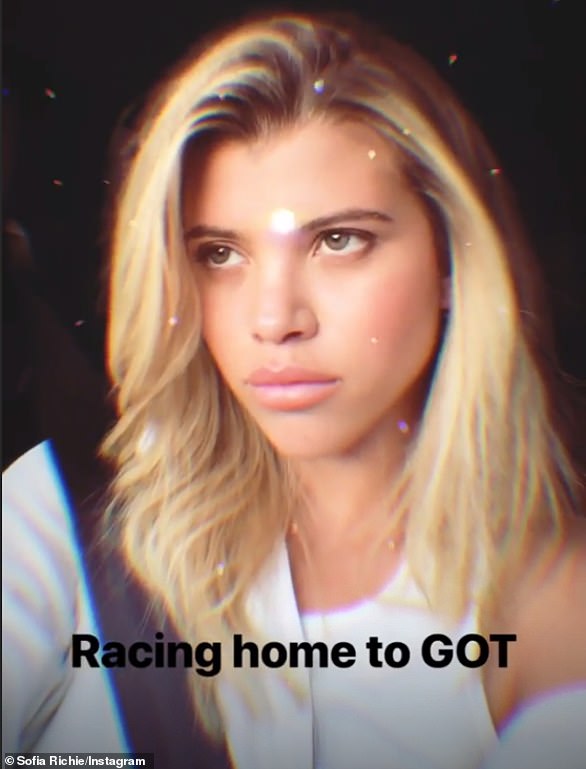 ‘Racing home to GOT’: Sofia Richie was in a hurry to watch the show 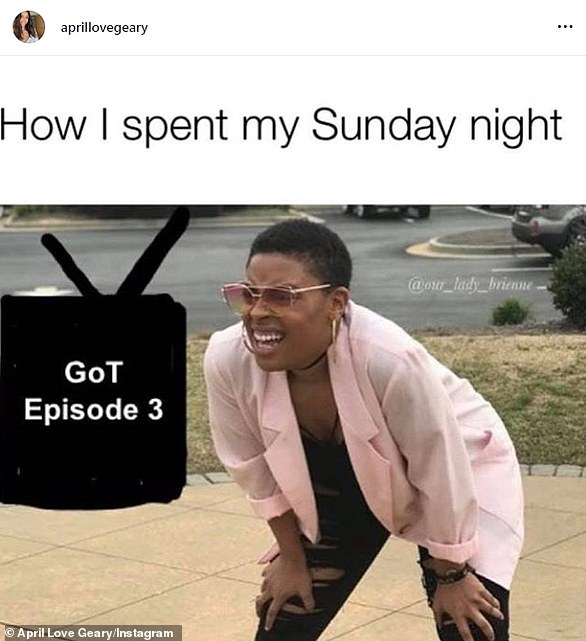 Watching TV: April Love Geary shared a meme of her plans to watch Game of Thrones 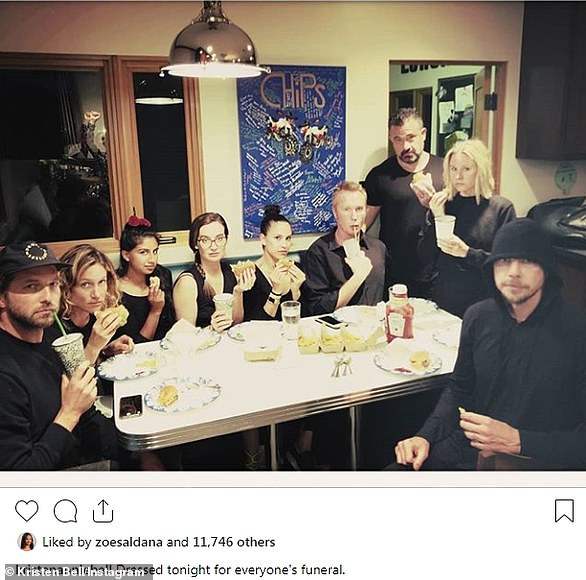 Serious fans: Kristin Bell shared a snap from her GOT party, that featured husband Dax Shepard and their pals dressed in all black ‘for everyone’s funeral’ 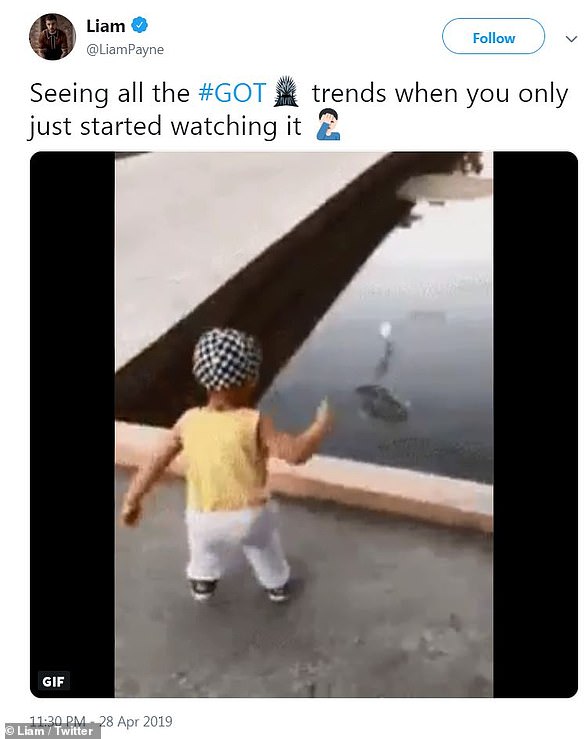 Getting in on the action: Liam Payne looked to be a little late to the game 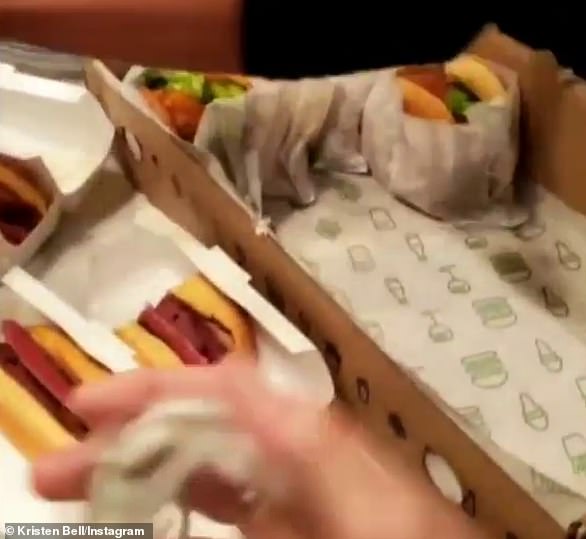 Delicious: Kristen treated her guests to hot dogs and hamburgers from Shake Shack 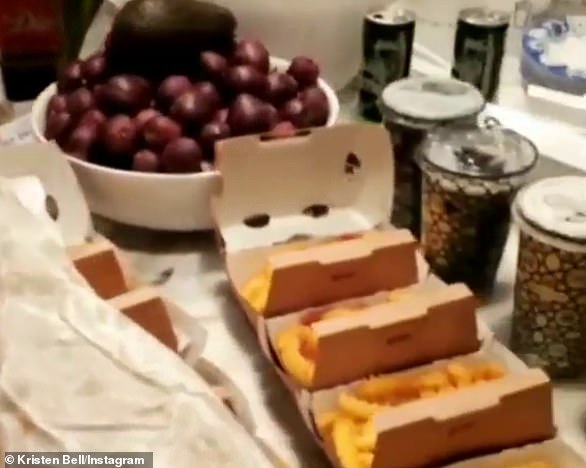 Yummy: Complementing the main course was a side of fries 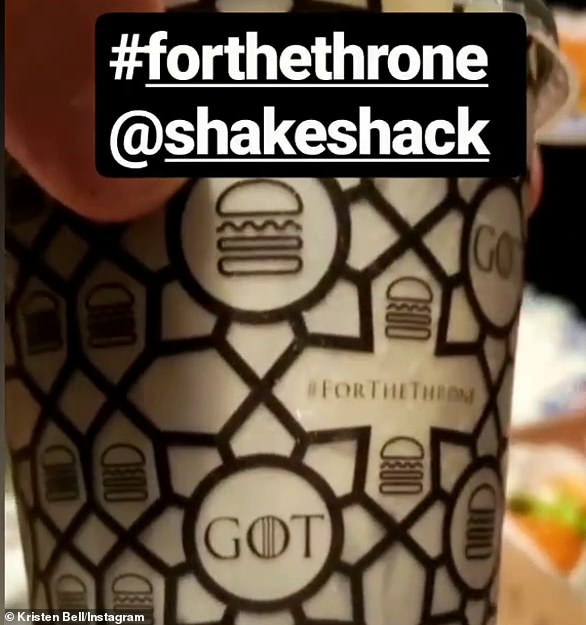 Celebration: Kristen also shared a cup with the GOT theme 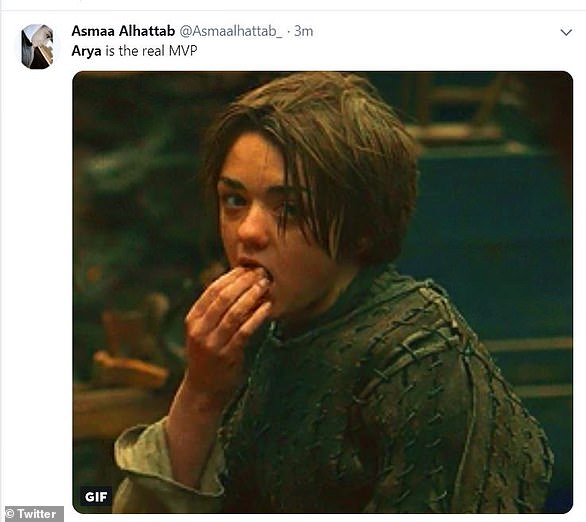 Most valuable: A Twitter user declared Arya, played by English actress Maisie Williams, was the most valuable player on the show 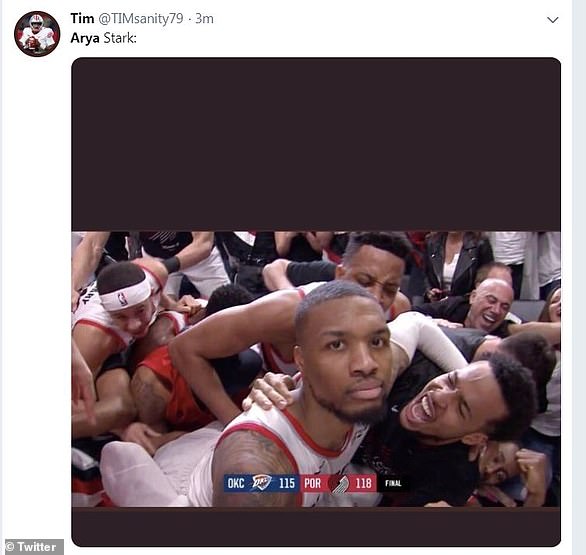 Dagger reference: Arya using her Valyrian steel dagger to kill the Night King also drew a comparison to NBA player Damian Lillard, 28, whose game-winning 3-pointer at the buzzer last week was the dagger that ended the Oklahoma City Thunder in the playoffs 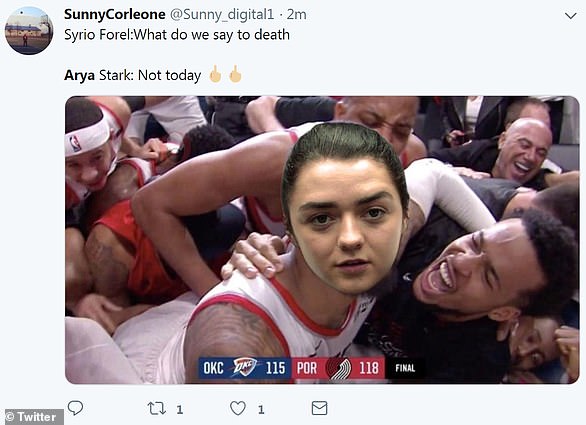 Popular reference: The heroine’s face was super-imposed over the Portland Trail Blazers star

It wasn’t the only NBA reference as The Ringer compared Arya’s hand switch with her dagger to Michael Jordan’s famous hand switching during Game 2 of the NBA Finals in June 1991.

A video clip showing Jordan switching ball into his left hand against the Los Angeles Lakers en route to a 21-point win was compared to Arya’s dagger drop and hand switch before fatally stabbing the Night King.

Other fans mocked the episode for its darkness and lamented that they could barely see anything. 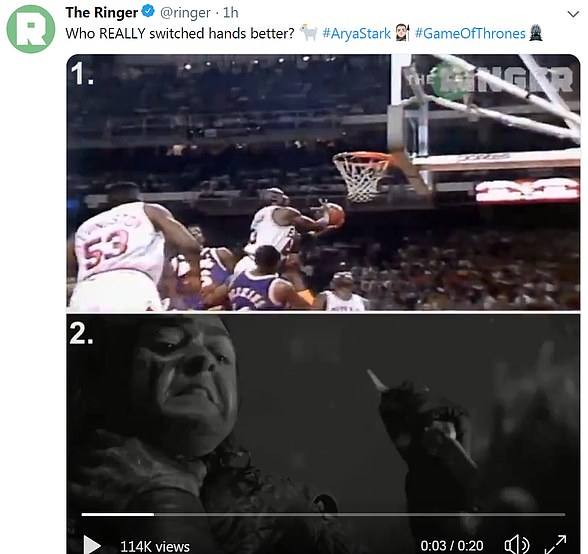 One Twitter used posted a black rectangle along with the caption: ‘Hands down my favorite scene from tonight’s episode of #GOT’.

Another viewer took to Twitter to thank the dragons for providing the ‘only source of light to actually see anything this episode’.

One tweet showed Mel B as a judge on America’s Got Talent using her hands as binoculars to get a better view along with the caption: ‘I can’t see a damn thing’. 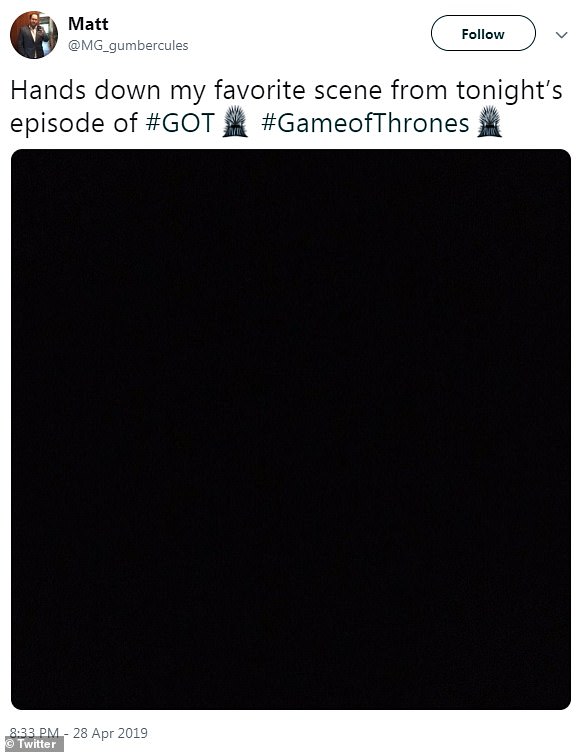 Favorite scene: The darkness of the episode was mocked by viewers on social media 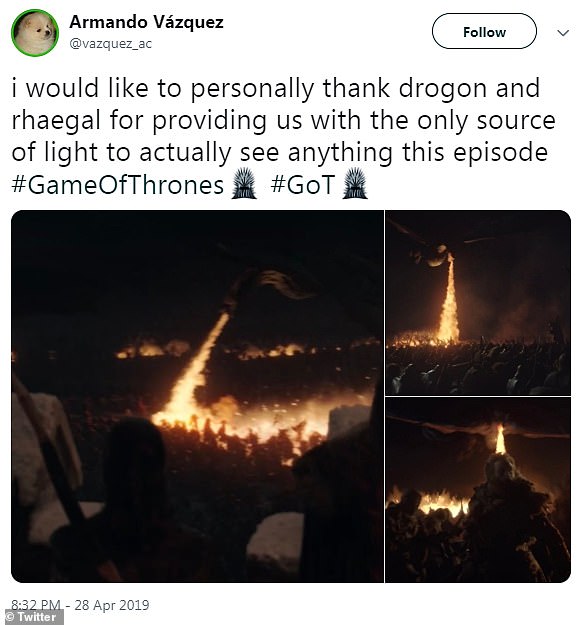 Dragon light: A viewer took to Twitter to thank the dragons for providing a source of light 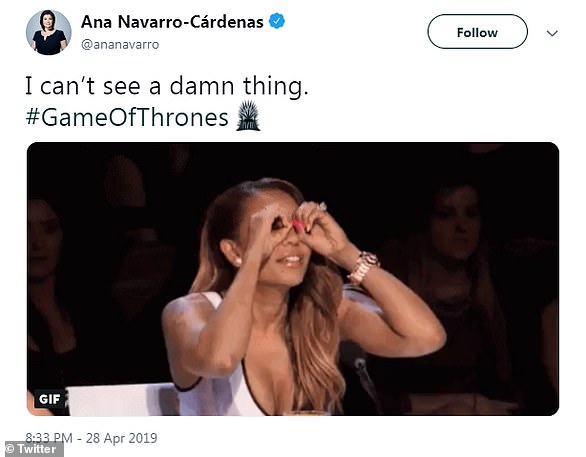 Hand binoculars: A tweet showed Mel B using her hands as binoculars with the caption, ‘I can’t see a damn thing’ 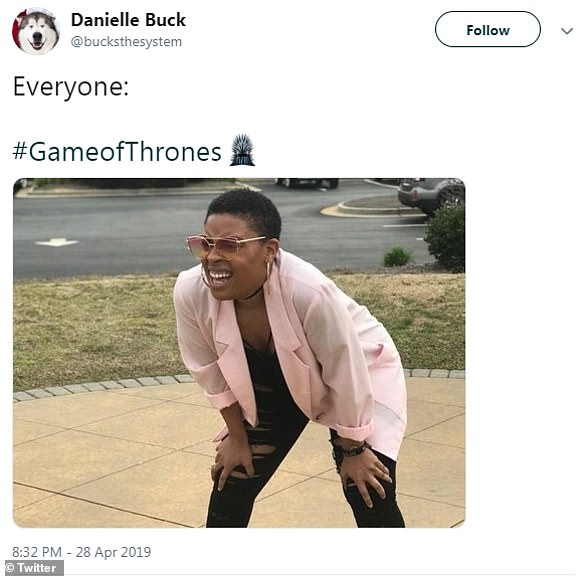 Shared experience: A Twitter used showed ‘Everyone’ with a photo of a woman squinting

The episode ran for 82 minutes making it the longest of the season and the series.

The last episode titled A Knight Of The Seven Kingdoms ended with the Night King marching on Winterfell and a trailer showed troops of the living lining up and catapults being loaded ahead of the Battle of Winterfell.

The newly-knighted Brienne of Tarth was leading the defensive forces and in a teaser was shown yelling, ‘Stand your ground!’.

One Twitter user posted that she was ready for the Battle of Winterfell with ‘snacks & an emotional support dog.’ 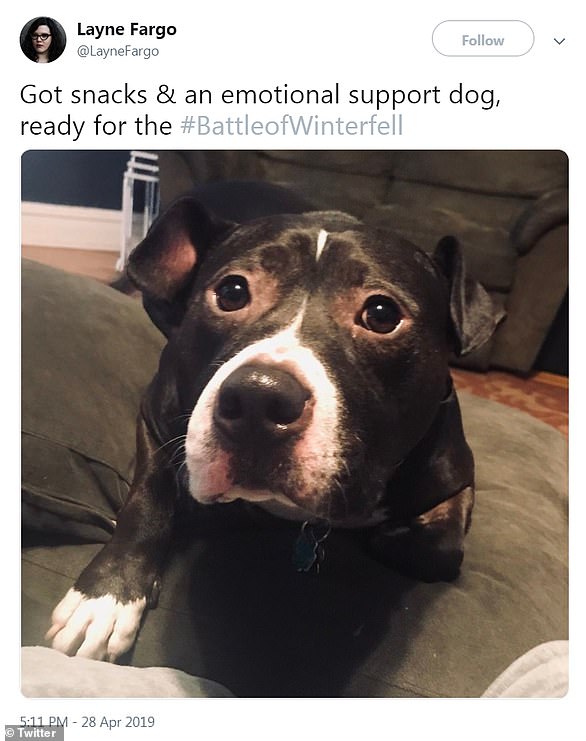 Support dog: A Twitter user said she was ready for the show with snacks and an ’emotional support dog’

Another posted a photo of people sitting at a table holding hands together with the caption reading: ‘Thrones fans right now’.

Game Of Thrones premiered its eighth and final season on HBO on April 18.

The six-episode season will conclude with the series finale on May 19.

The wildly popular HBO fantasy drama series is based on fantasy novels by George RR Martin. 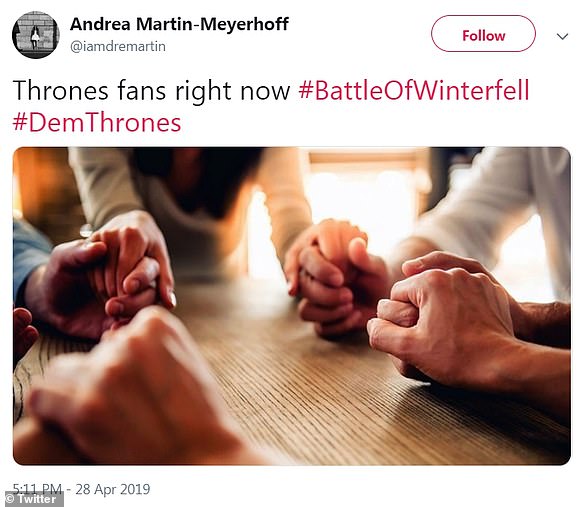 Holding hands: Another tweet shared a picture of people holding hands as Game Of Thrones face braced for the upcoming epic battle with its likely high death toll