A rainy night in New York in January 2018, and a very familiar-looking man with a British accent and lavishly Byronic hair is running into a little difficulty in a sports bar.

He is trying to join in with a game of pool, but things aren’t going well. He’s slurring ‘gimme me that cue!’ as the rules are explained to him, but doesn’t seem able to take them in. Eventually he has to be ‘helped to the door’ by staff.

Video footage taken on the night shows that he appears too drunk to walk on his own.

The man in question is Kit Harington, the £8 million star of the biggest TV series ever made, who has now gone into rehab to deal with stress and alcohol issues.

The owner of the bar has said that the Game Of Thrones star was — with wonderful euphemism — ‘over-served’ at another bar, and added that he had bought a whisky for himself and drinks for everyone at the bar, tipped well and was a ‘very nice guy’.

He went on: ‘The game being played is called ‘Killer’ where each person takes one shot, but Harington wanted to continue shooting. When our staff realised how intoxicated Harington was they politely asked him to leave and two of our staff members helped him out.’

The party is over now. Harington, 32, is in rehab at the £95,000-a-month Prive Swiss wellness retreat in Connecticut.

Pensive: Harington during a break from filming, and, right, tearful as he learns his Game Of Thrones character kills lover Daenerys

The timing of the incident at the pool table was no coincidence. He was a couple of months into filming Season Eight of the series that made his name, and had been his life for nine years.

Harington, the son of a baronet, landed his career-making role almost straight out of drama school. The cast had been his family — he even married his co-star, and on-screen lover, the actress Rose Leslie in 2016 after meeting on set — and his entire world for most of his adult life.

After filming his final scene, he was distraught: ‘My heart is breaking. I love this show more than anything. It has never been a job for me, it’s my life,’ he said.

The final episode was screened on May 19, but it’s said Kit went into the extremely private rehab facility near the small town of Madison a month ago after completing a round of press and promotional appearances.

His publicist said: ‘Kit has decided to utilise this break in his schedule as an opportunity to spend some time at a wellness retreat to work on some personal issues.’

A source revealed that Harington was at the facility ‘predominantly for stress and exhaustion and also alcohol’.

The source added: ‘His wife Rose is being extremely supportive. Everyone close to him really wanted him to get some rest. Right now, he just needs peace and quiet.’

So what’s wrong with Kit? At least superficially, the crisis has been provoked by the end of Game Of Thrones. 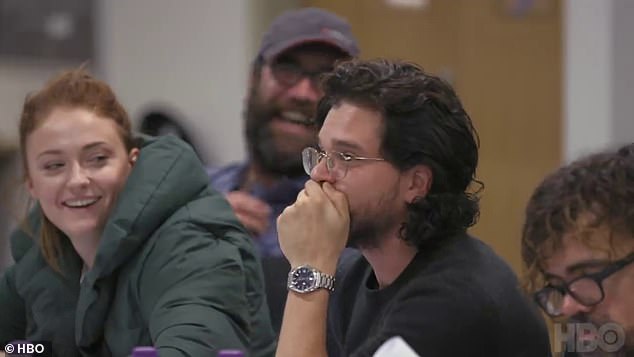 The actor, 32, is overcome with emotion when he learns of his character’s fate

In a behind-the-scenes documentary about the show he was seen crying over the ending which saw him kill his lover (and aunt) Daenerys Targaryen, played by Emilia Clarke. He said that when he read what was to happen: ‘I blubbed my eyes out. I cried. I cried, yeah.’

It’s also true that after nine years playing hero Jon Snow, he has nothing to do: his schedule is empty.

He has written some television shows with friend Dan West, who was his co-writer on the 2017 TV series Gunpowder and his best pal at Central drama school, but there is no filming in the diary.

A mooted opportunity to be the next Batman, which he said would have been ‘awesome’, came to nothing. Rival Brit heartthrob Robert Pattinson is to don the suit for that.

While Game Of Thrones made him a household name, fame has taken its toll, leaving him loathing and loving it with equal passion.

He’s been quoted saying that the first series of Game Of Thrones was the most fun to film, as nobody knew who he was.

These days, crowds of up to 500 will gather if word spreads that he is at a certain hotel, and he is approached constantly for photographs by fans, which he always refuses.

‘You have to, otherwise you end up feeling like a mannequin,’ he said. ‘It feels like being Bieber or something.’ 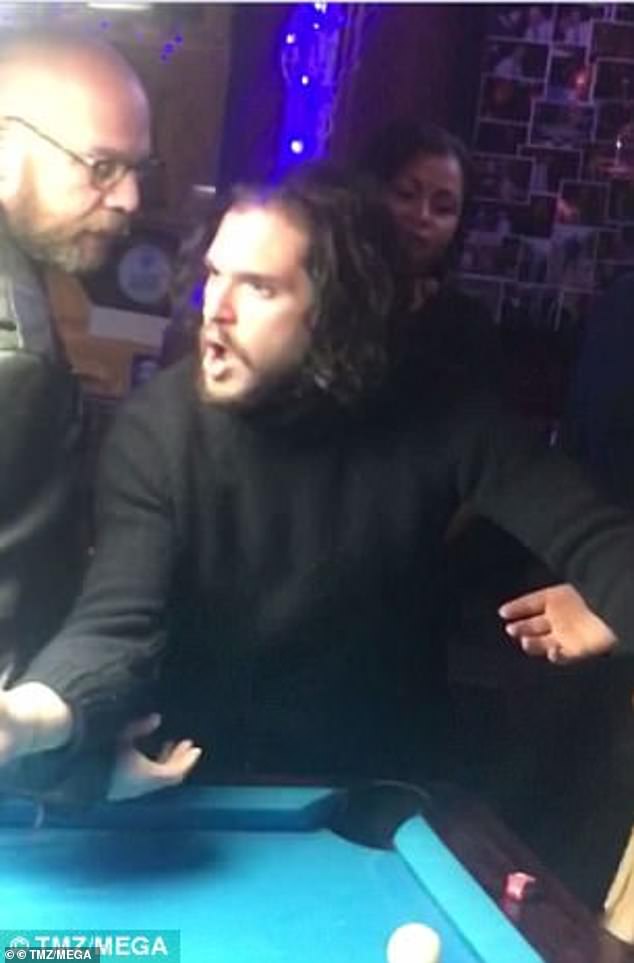 Angry: Harington tries to join in a pool game in a New York bar but won’t let others have a go

Unlike his co-stars, he has shunned social media because he found the GoT hype so alarming. In an interview this year he explained: ‘I give enough of myself away that if I did it on my own time it would drive me mad.’

He was contractually prevented from cutting his hair, or discussing plots with anyone — even his wife (her character was killed off in Series 4).

By 2015, when the cliffhanger plot revolved around whether he was alive or dead, he found that he needed therapy to deal with the pressure — and a terrible case of ‘impostor syndrome’.

He said that his greatest fear was discovering that, actually, he wasn’t able to act after all.

There is no question that growing up in the public eye was tricky — and also no question that repeated indiscretions caught on camera showed he was seemingly using boozy binges to let off steam.

As he said in an interview: ‘I have a wild streak, but I like to keep that very much for my friends. I love going out. I love partying.’

When Game Of Thrones was filming he would spend six months between two hotels, one in Belfast and in one in Iceland, where darkness falls at 4pm.

There was a sense of being involved in an epic undertaking: one battle scene took 55 days to shoot. 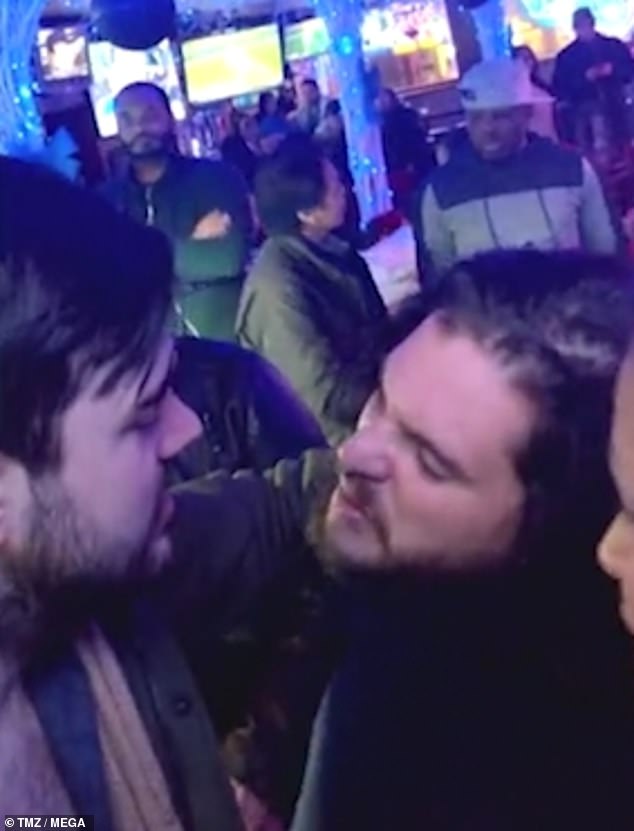 He said just before the final series was aired: ‘I know how much work was put into this, how much pressure people put on themselves.

‘They cared about the characters, the story, about not letting people down. If people feel let down by it, I don’t give a f***, because everyone tried their hardest.’

In the evenings, the cast and crew would get together and drink and play board games. Pictures have emerged of him drinking in Belfast.

Pictures also emerged last November, taken by a Russian model, showing Harington apparently asleep. Olya Sergeevna, who posted them, claimed that they had had an affair but she got fed up because he was so addled.

She said: ‘He was always drunk and could never remember the things we were talking about.’

Harington’s publicity team said that they had never met. He was also seen staggering out of a Paris bar after a four-hour drinking session last spring. On this occasion, at least he had a legitimate excuse: he was apparently at the stag do before his wedding.

Kit Harington — or Christopher Catesby Harington to give him his full name — has always been a conflicted soul. 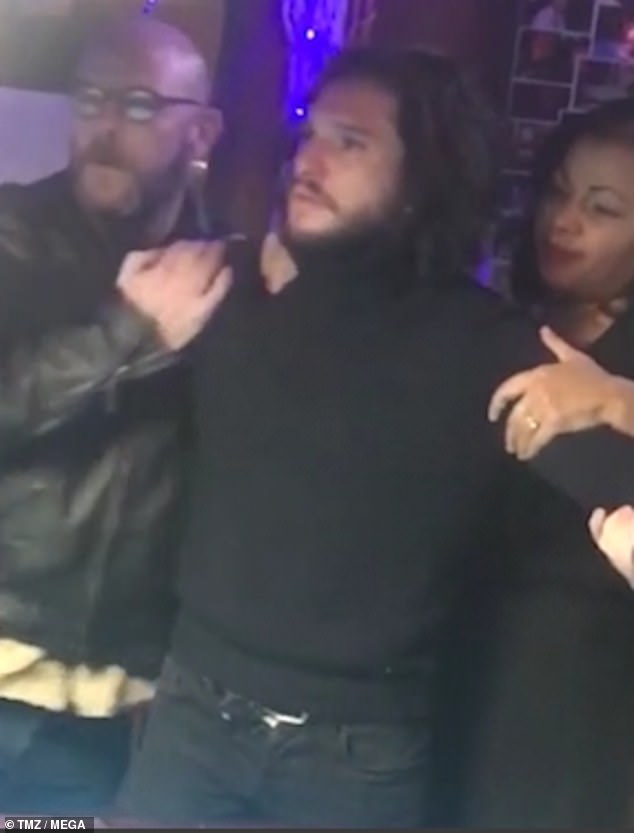 Born in Acton, West London, his father is Sir David Harington, a businessman and the 15th Baronet of Ridlington, Rutland. His mother Deborah Catesby is a playwright descended from Gunpowder plotter Robert Catesby.

Yet he was raised in Worcestershire, and went to the local state school, Chantry High School in Martley, before going on to a sixth-form college in Worcester, taking theatre studies.

He remains sensitive about his aristocratic roots. He said: ‘People see I have got an aristocratic heritage so they imagine I’m one of those actors who went to public school, but I didn’t. I’m not from a particularly wealthy background.’

After attending the Central School of Speech and Drama he was cast in a theatrical production of War Horse, and then asked to appear in a pilot for Game Of Thrones. He was 23 when the first series was filmed.

He said: ‘Over that period of time we all completely change, stuff happens to us and our whole bodies physically change.

‘I look back at who I was when I started Thrones and it’s emotional because that Kit is so different from me today. That Kit was just amazed at everything but now when I’m on a red carpet and there are flashbulbs, I take it for granted.

‘Fame is a really odd situation. There are times when I’ve been a p***k and been egotistical. But I have always had people around who have been truthful with me and put me right.’

He told another interviewer: ‘At the beginning it was exciting, then in the middle it started to get a bit weird. One of the things I’m looking forward to is stepping back from that intensity.

‘It’ll follow me for ever, but being in all the circus of the hype around a show like that is something I’m fortunate to have experienced — fortunate especially because now I don’t feel like I have to chase some kind of fame that maybe I was chasing at the start.’

After his character was killed off — stabbed in the heart by his own brethren, before being brought back to life — at the end of Series Five, he found it hard going.

By this point he was being paid around £370,000 an episode, but speaks of it being the darkest period of his career: ‘The show seemed to become so much about Jon, when he died and came back. 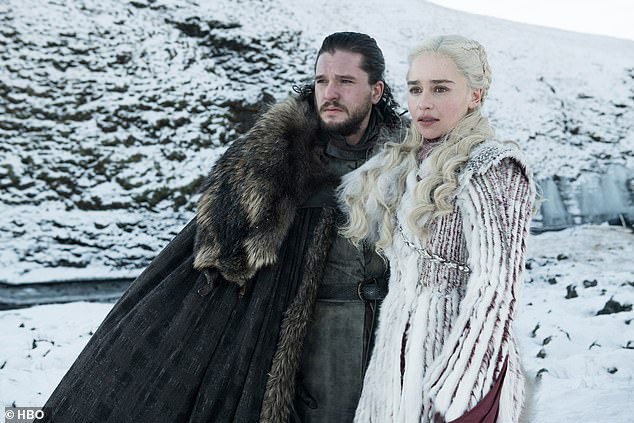 In a behind-the-scenes documentary about the show he was seen crying over the ending which saw him kill his lover (and aunt) Daenerys Targaryen, played by Emilia Clarke (pictured with him). He said that when he read what was to happen: ‘I blubbed my eyes out. I cried. I cried, yeah.’

‘When you become the cliffhanger of a TV show, and a TV show probably at the height of its power, the focus on you is f***ing terrifying.

‘I felt I had to feel that I was the most fortunate person in the world, when actually, I felt very vulnerable. I had a shaky time in my life around there — like I think a lot of people do in their 20s.

‘That was a time when I started therapy. I had felt very unsafe, and I wasn’t talking to anyone. I had to feel very grateful for what I have, but I felt incredibly concerned about whether I could even act.’

By now he was in a romance with Rose Leslie. They had met while filming in 2014, and were married in June 2018 near to her family castle in Scotland. They have a house in London.

The couple were seen lovingly arm in arm in January this year and she is said to be supporting him.

While in treatment he will, one hopes, have missed out on all the controversy over the final series and its ‘let down’ of an ending, and be able to concentrate instead on the really big question, which is what comes next for him.