Gamer who knocked Jacksonville gunman out of tournament speaks out

The gamer who knocked the Jacksonville gunman out of the virtual NFL tournament they were playing in before his bloody rampage began on Sunday has spoken out to say he is lucky to be alive.

Wesley Gittens, aka JoeRice, had just defeated David Katz at the Madden 19 qualifier match in GLHF sports bar in Jacksonville, Florida, on Sunday when he sat down next to Eli Clayton, 22, to play another match.

The pair were filmed getting comfortable and smiling as they began their game on a live stream from the event.

Within seconds, the first shots rang out and Clayton was shot dead.

Gittens, 20, was able to escape. After false reports that he was among the dead, he tweeted on Sunday to let his fans know he was safe.

Wesley Gittens, aka Joe Rice, is shown above sitting next to Eli Clayton seconds before David Katz opened fire on at the tournament on Sunday. Gittens had just knocked Katz out

On Sunday, as false rumor circulated that he had been killed, Gittens tweeted to say he was safe

‘I just want to let everyone know I’m safe I wasn’t shot I made it out of there… I’m honestly blessed to be alive,’ he wrote.

In a second post, he said: ‘I just wanna say I love you trueboy you were one of my best friends in madden and outside of madden rip brother.’ 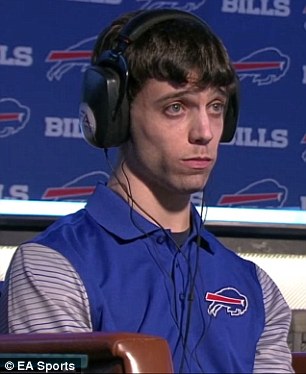 David Katz, the shooter, had been beaten once in the group stage but he advanced to the single elimination round which is when Gittens beat him. He is pictured at last year’s tournament

He has since asked friends and well wishers to donate to a GoFundMe page set up to help the victims’ families.

Taylor Robertson, a 27-year-old father from Virginia, was also killed.

What exactly prompted Katz, who was considered strange by event organizers in the past, to open fire remains unclear.

It is also unclear who his target was or if he had any one in particular.

Eleven other people were injured in his rampage, including some whose hands and backs were grazed by bullets, before he shot himself.

On Monday, 20-year-old Gittens was boarding a flight home to Georgia.

He tweeted: ‘Just got to the airport I’m so ready to get out of Jacksonville and never come back.’

Before being knocked out in the single elimination round, Katz played four games.

He won two in the group stages and lost another. The person who beat him in that round said he behaved strangely and refused to shake his hand afterwards.

‘He had shades on, he didn’t talk to anybody. I went to tell him good game and shake his hand and he just looked at me.

‘He didn’t say anything,’ the player, who was not named, said.

Kay Shivlen, who won the tournament last year, has since said that he thought he was the gunman’s target because he knocked him out in 2017. 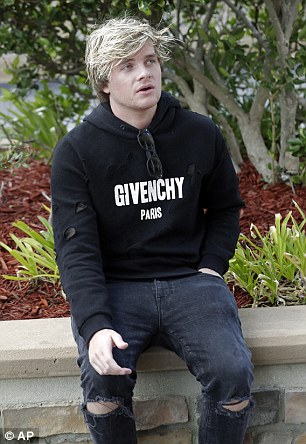 In an interview with The New York Post on Monday, Kay Shivlen said he had just left the tournament when Katz returned with his weapon.

Shivlen claims Katz asked someone working there where he had gone.

‘Supposedly as I was leaving the tournament, the guy who shot the place up had asked where I was going.

‘He told me that I might be a target,’ Shivlen said.

Shivlen beat him last year and went on to win the entire tournament. He said the rest of the community thought of Katz as ‘off’.

‘Everyone knew he was kind of off. He never tried to be social. He came to play and kept to himself.

‘He had some issues and he took it out on everyone. He had people that he wanted, but anyone else who was in the way was going down,’ he said.