A 15-year-old boy was allegedly spat at and then stamped on more than 30 times by a group of 20 youths at his school in an ordeal which left him fearing for his life.

Issac Adkins-Plimmer said he was attacked after defending a young girl who was being tormented by a separate group of youths at Noel-Baker Academy in Derby.

The girl had asked the boys to stop throwing water at her and laughing because ‘she was getting very upset’ during the incident at around 1pm last Thursday.

Issac Adkins-Plimmer, pictured with his mother Gemma, was attacked at school after defending a young girl who was being tormented by a group of youths

Most of the group stopped but one of them spat at Issac, who is a boxer, in his face and then brought older teenagers into the dispute.

Issac, of Allenton, Derby, said: ‘It was in the playground and I just asked the group of lads why they were doing it to a young girl who had started to become upset.

‘Most of them were OK with that and accepted it but one lad didn’t and he came up to my face, had a go at me and then spat water in my face. 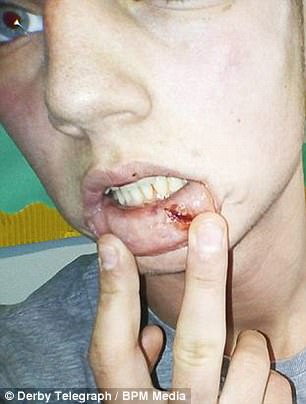 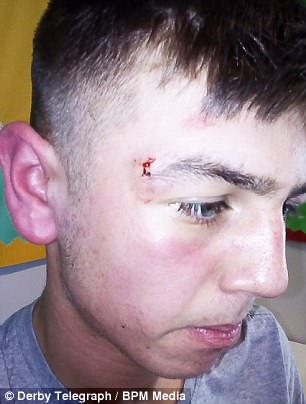 Issac was left with severe bruising, a split lip, and ears which his mother said had swollen to double their normal size

‘Then, he came back with with a gang of around 20 youths who were 15 and 16. They got me on the ground and asked me what I was doing and why I had got involved.

‘One of them tried to grab me by the back of the neck and then hit me. Then it all happened and they were all over me kicking me and stamping on me.

‘It was on my head, my body, my arm. It was horrific. I tried to cover myself but it was too difficult. They were stamping all over me.

‘I was stamped on more than 30 times and it was a blur. I was so scared. I feared for my life. I was bleeding straight away but I didn’t get chance to do anything. It was savage and brutal.’

Issac, who is a boxer, said it was the most painful and frightening experience he had ever been through.

He added: ‘I didn’t know when it would end. They were much bigger than me and I think they would know I was a boxer.’

The attack, which lasted a couple of minutes, was brought to an end and Issac was brought up from the ground covered in blood.

He said: ‘It was everywhere. It ended when a teacher came over to help who had witnessed it.’

Issac was then taken to the urgent care centre at London Road Community Hospital in Derby, where his injuries were assessed.

He was left with severe bruising, a split lip, and ears which his mother said had swollen to double their normal size. 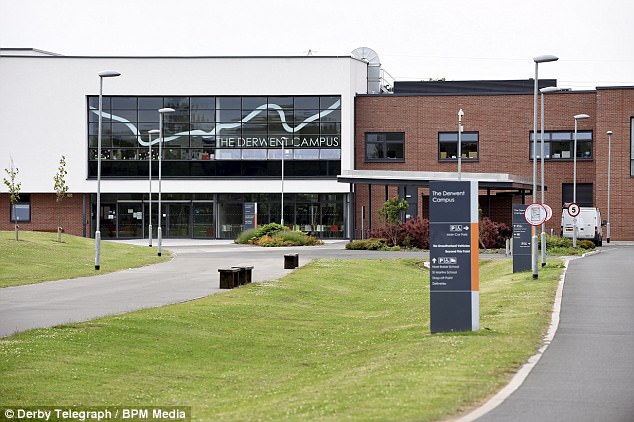 Issac added: ‘I couldn’t believe how it just happened so easily. It was horrible. All I was trying to do was stick up for a younger pupil who was being bothered. I didn’t want any trouble. It could have been the end of me. I feared for my life.’

His mother, Gemma Adkins-Plimmer said: ‘I’m shocked by this. It’s made me feel sick. I think it’s disgusting. I’m really worried about it.’

A school spokesman said: ‘Following the incident we ensured the safety of the students concerned; with close supervision from staff.

‘In line with communication practises the parents were immediately informed and visited the school to collect their child.

‘Needless to say we have launched a full investigation and will continue to keep all concerned parents and pupils up to date as we reach a conclusion.’

A Derbyshire Constabulary spokesman said the force was aware of the incident. Anybody with information or who witnessed the attack should call police on 101.