A young gay man who was brutally bashed by a gang of thugs at a Westfield shopping centre has vowed to never return to Queensland after the attack.

Joshua and his 16-year-old were visiting family when they were approached by the gang of ‘bloodthirsty’ teenage thugs at Coomera Westfield on Tuesday.

The 21-year-old claims he and his brother were ‘hunted down’ and viciously bashed at the shopping centre after the group verbally abused them on the bus.

Joshua and his 16-year-old were visiting family when they were approached by the gang of ‘bloodthirsty’ teenage thugs and bashed (pictured: Joshua’s injuries)

Joshua said the physical altercation began at 2.10pm as he ate lunch with his brother inside an eatery in the shopping centre.

He claimed a group of ten – who looked as if they were ‘hunting’ for someone – launched on them.

The 21-year-old said he recognised some of the members of the gang from the morning confrontation on the bus.

He said the attack went on for a few minutes and only ended when a security guard rushed over.

‘They were bloodthirsty … the first time was very traumatic but the second time they hunted us down,’ Joshua said.

He said neither he or his brother had the chance to defend themselves as they were continuously stomped on.

Both were rushed to Gold Coast University Hospital by ambulance.

Joshua suffered broken ribs and a swollen face while his little brother was treated for fractured ribs, a swollen eye and a split lip.

The young man has been left traumatised by the attacks and said it was evidence that much of Queensland and the Gold Coast was ‘homophobic’.

Joshua and his adopted family chose to move to Melbourne to escape the discrimination, but he chose to visit his biological family for a holiday. 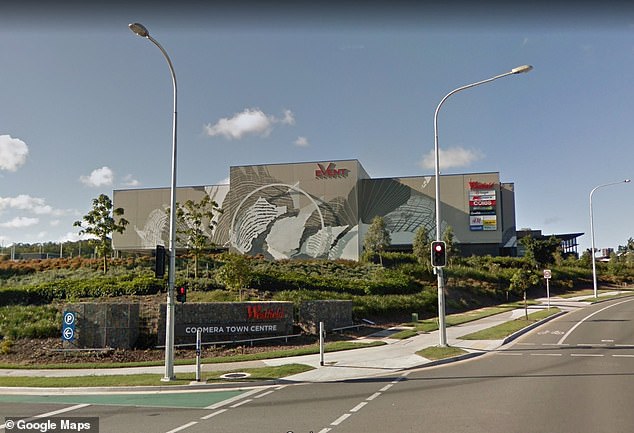 Joshua and his brother then went to Coomera Westfield (pictured) and were eating lunch about 2.10pm when the group of ten launched on them

‘It was completely unwarranted, it’s just brutal violence. It’s a hate crime. I feel like I can’t go back to Queensland, it’s shaken me.’

Joshua said he felt devastated and guilty that his sexuality put his younger brotherin danger.

On Wednesday evening police charged two teenagers in relation to the attack.

A 15-year-old from Upper Coomera was charged at 6pm with assault occasioning bodily harm whilst armed/in company.

The underage teenager will be dealt with according to the provisions of the Youth Justice Act while the 18-year-old is expected to front Southport Magistrates Court on October 2.

Police attended the shopping centre on Tuesday and are still searching for others involved in the attack.

Investigations are continuing and police expect more charges to be laid.