This is the astonishing moment that a gang of hapless thieves stealing parcels from an Amazon van before they struggle to drive away in a crammed stolen car.

The clip is thought to have been filmed in the Bradford area by the delivery driver who stands back at a safe distance as the masked thugs carry out the raid.

At least one package that appears to be marked with Amazon’s distinctive ‘smile’ logo can be seen during the robbery, which happens in the middle of the street. 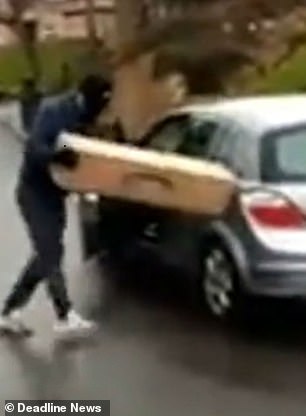 A gang of brazen thieves bit off more than they could chew after stealing a collection of parcels from an Amazon delivery van. Some of the packages in the video, which is thought to have been filmed in Bradford and later shared on Facebook, are so big that the men struggle to get them in to their stolen car

The video, which was shared on Facebook page Crime in UK yesterday, has garnered dozens of angry comments. User Debbie Brown wrote: ‘Vile feral scum. Feel sorry for delivery drivers, they need security with them to do that job these days’

The brazen criminals, who are wearing balaclavas stuff the getaway vehicle with so many packages that one of them struggles to get in to the vehicle.

Eventually, the car has to take off with two of its doors open.

The clip was uploaded to the Facebook page Crime in UK yesterday but it is not known when it was filmed.

The video’s caption reads, ‘A stolen vehicle was used as a get way by these rats. This is what delivery drivers have to put up with nowadays.’ 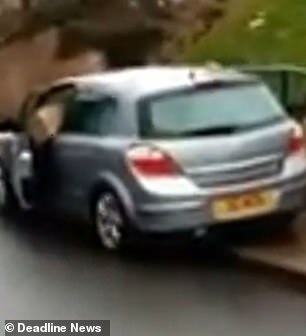 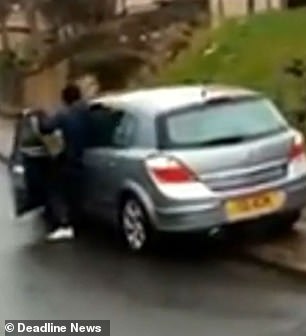 The car’s driver, anxious to escape, presses the car’s accelerator as the group wait to escape. Eventually, they drive away with two of the car’s doors open

Another Facebook user on the Crime in UK page jokingly wrote, ‘Looked like a Benny Hill video, watching them getting those boxes in, dumb c***s’

One viewer of the clip, Stewart Delaney, from Bradford, claimed he had caught the same vehicle – with the registration plate S2 ACN – on CCTV at his home on Wednesday.

Another Facebook user, Debbie Brown, wrote: ‘Vile feral scum. Feel sorry for delivery drivers need security with them to do that job these days hope parcels full of stuff they can’t sell nothing valuable.’

Nabis Ottoman added: ‘Dumb and Dumber comes to mind how many are going to try and get in front seat.’