Shocking CCTV shows the moment a small army of moped raiders swarmed around a designer boutique to steal handbags has been released by police.

Nine suspects on five mopeds pulled up outside the Michael Kors outlet on Duke of York Square in Chelsea, west London.

One of the gang is seen hurling a brick at the window from the back of his vehicle before booting the door with four accomplices. Another suspect is shown producing a stick to batter the entrance.

They then rush into the shop, emerging seconds later with armfuls of colourful designer merchandise.

The Metropolitan Police said the gang escaped on their mopeds along Kings Road.

Two of the mopeds had their escape momentarily delayed after several handbags were dropped, the footage shows.

Police released the footage nearly nine months after the raid, which took place shortly before midnight on February 20.

Officers are investigating whether the same gang were responsible for a burglary which employed similar tactics at House of Fraser on Oxford Street at 12.46am on October 26. 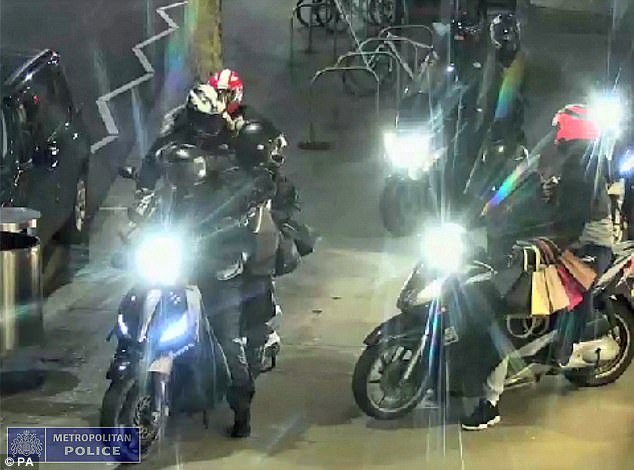 Detectives are appealing for information about the group, after six arrests in connection with the February incident resulted in only one 23-year-old man being charged with burglary.

The remaining five suspects were released without charge, the Met said.

Detective Constable Sam Weller said: ‘We are appealing to the public to help us identify this gang. They are responsible for the theft of designer handbags and we would urge anyone with information to contact us.’

The footage emerged as the Met unveiled new tactics in the fight against the growing problem of moped crime.

Scotland Yard showed off its four new BMW scrambler bikes this morning, which they hope will help them chase agile scooters through the streets of the capital. 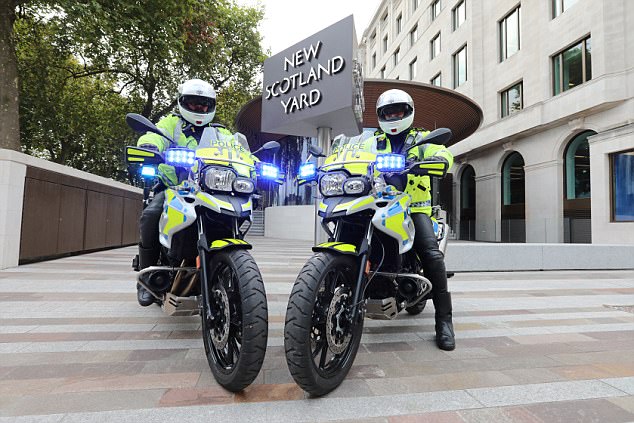 They will also use remote-control stingers to stop fleeing bikes and so-called ‘DNA spray’ to catch those that do get away.

Commissioner, Cressida Dick said: ‘I have been clear that tackling violence is my priority. I was angered by the apparent perception amongst some criminals that they could operate with near impunity, committing strings of offences using scooters.

‘We have brought all our tactics and specialists together to use every ethical option to put a stop to the rise; arrest those responsible; disrupt offenders; dismantle the criminal markets that make these offences lucrative and change the public’s behaviour to make them a part of our effort.’