Horrifying moment gang of thieves execute supermarket employee in Argentina before escaping with just $420, wine and several pounds of meat

This is the horrifying moment a clerk was shot dead in the back by a gang of machine gun-toting thieves outside a supermarket in Argentina before they escaped with $420.

As the employees fled, one of the suspects opened fire with his rifle, sending both men to the ground as they tripped over each other, a surveillance video showed. 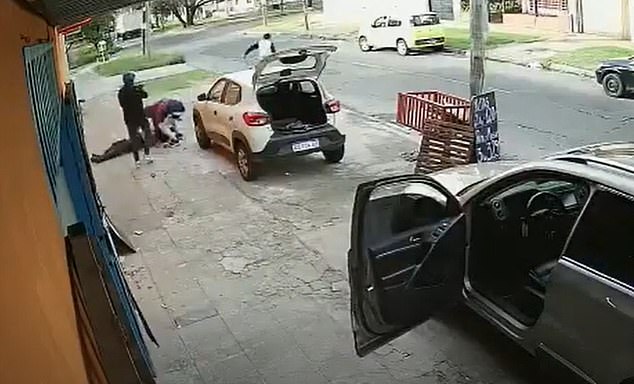 Once the assailants closed in, the worker who narrowly missed being shot raced across the street and disappeared as he around a building.

A separate security camera showed how the suspects terrorized a bevy of shoppers trapped inside while they ransacked the supermarket and ripped out a laptop from the counter.

A short while later, a suspect aimed his machine gun and then led two males to the counter. 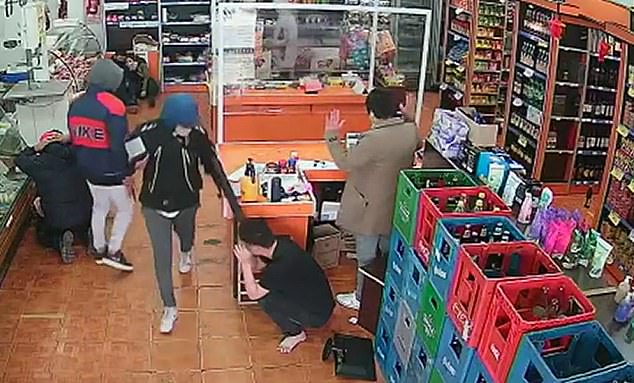 A female worker, who was not named, told Argentine newspaper La Nación that it appeared the thieves knew the layout of the store because some of them walked to the back area of the supermarket, which leads to the owner’s home where they beat him.

It took the suspects nearly five minutes to rob the supermarket.

The attackers drove towards the town of San Martín and engaged the police in a shootout as they were pursued and abandoned their vehicle near a cemetery before fleeing on foot.

No arrests had been made as of Tuesday afternoon.