An armed gang who robbed a rich couple of more than £100,000 of jewellery after following them home from a restaurant have been jailed for more than 30 years.

Daniel Inamder, 35, and Isaac Duncan, 20, were caught when their victims spotted their car on a photo taken at a pizza restaurant the night before the raid.

The two men, along with another man who has never been traced, broke into the couple’s through a patio door as they slept.

They shouted ‘police, police’ as the pair awoke, pistol-whipping the male victim in the face and causing a cut that required 35 stitches while demanding access to their safe.

Daniel Inamder, 35, and Isaac Duncan, 20, were caught when their victims spotted their BMW on a photo taken at a pizza restaurant the night before the raid (pictured)

The unknown man ripped a gold necklace from around the woman’s neck and snatched her diamond engagement ring valued at £92,000.

During the raid they also stole a pair of diamond earrings, a second diamond ring and two Rolex watches.

One of the robbers shouted at the woman ‘where’s your big diamond?’ at the property in a village north of the city, Leeds Crown Court heard.

Prosecutor Michael Smith revealed how Inamder had planned the raid, setting up contacts to sell the jewellery once he had stolen it – none of which was recovered by police. 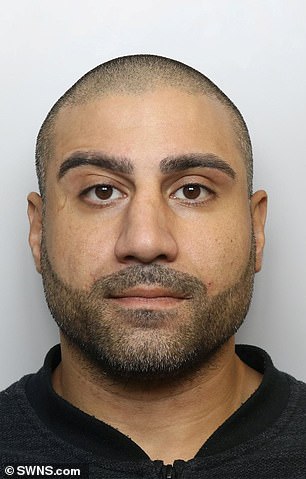 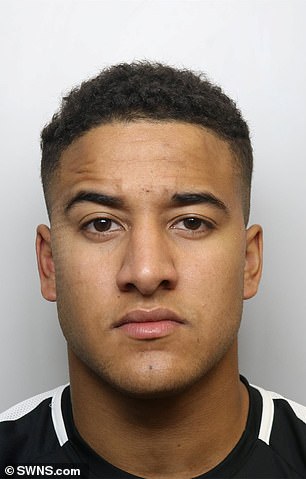 The couple who were attacked have been left scarred from the attack, the man suffers from nervousness and anxiety and the woman is unable to sleep and is nervous all the time.

Mr Smith said: ‘They were subjected to a terrifying ordeal.’ 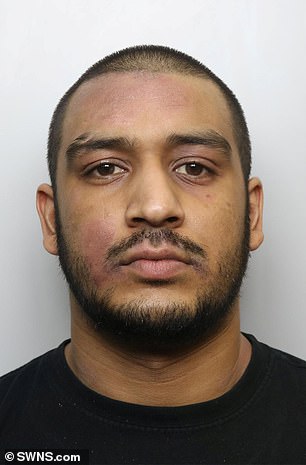 Getaway driver Ali Agha (pictured), 27, denied robbery but was convicted after a trial and jailed for ten years

‘It involved significant planning and recruitment of a number of people.

‘Telephones were purchased to assist in carrying it out but also in an attempt to escape detection.

‘An imitation firearm was taken and gratuitous violence was used.

‘They were confronted by three men, two of them had masks covering their faces, adding immeasurably to the fear of (the couple) in their home.

‘It’s difficult to imagine how you feel if you have jewellery ripped from your person while you are lying in bed.’

Inamder, of Leeds, admitted conspiracy to rob and was jailed for 12 years.

Duncan, also from Leeds, pleaded guilty to robbery and possession of an imitation firearm and was jailed for 10 years and five months.

Getaway driver Ali Agha, 27, denied robbery but was convicted after a trial and jailed for ten years.

Mark McKone, mitigating for father-of-three Inamder, told the court: ‘The violence that was used was not something Mr Inamder anticipated.’

Kenton Sargeant, for Ali Agha, said he did not go in the house and was the driver, adding: ‘He didn’t know about the gun – he wasn’t involved in the violence.’

Baltaj Bhatia, for Duncan, said: ‘He is an immature young man who is easily led. There is genuine remorse.’