Krampus devils have been accused of a record number of assaults, starting fights and leaving people bloodied in the streets in the build up to their centuries old Krampus Day in Austria.

An 11-year-old had their thigh cut while another spectator was hit in the face by one of the devils, in Carinthia, Austria.

Fire fighters were beaten up by a group of Krampuses in Klagenfurt, Carinthia, Austria, last week.

Krampus devils have been accused of a record number of attacks across Austria in the run up to their annual Krampus Day which celebrates the demonic monster, originating from German folklore, that has the task of punishing children who misbehave at Christmas 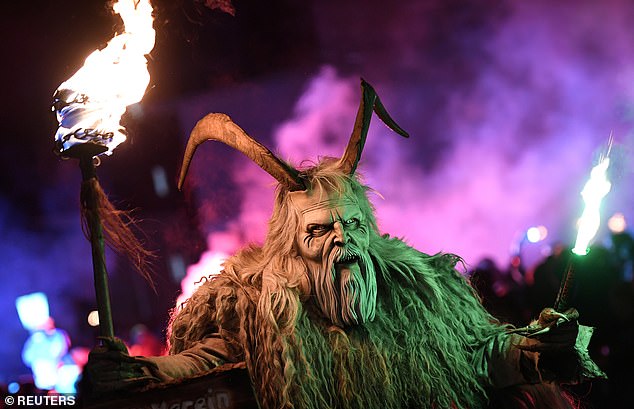 Rules for those partaking have been issued across Austria. They say ‘impersonators [are allowed to] make spectators skin crawl with [their] appearance and movement – but can not cause fear or even panic’

The mangled, deranged looking monsters, which originate from pre-Germanic paganism and folklore, is said to have the task of punishing children who misbehave on Krampusnacht – on the evening of December 5 – while Saint Nicholas rewards the good.

Revellers don hard-carved wooden masks with animal horns, suits made from sheep or goat skin and large cow bells which ring as they dance and run.

And horrifying footage has emerged of spectators fleeing from a group of devils which start kicking a person lying on the ground in Sterzing, South Tyrol, Italy, on December 5.

A man suffered severe neck injuries after a spectator grabbed the horns of his Percht Alpine pagan goddess costume, in Neumarkt, Lower Austria. 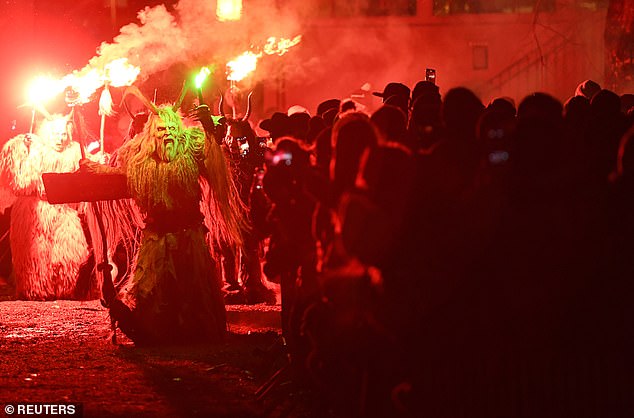 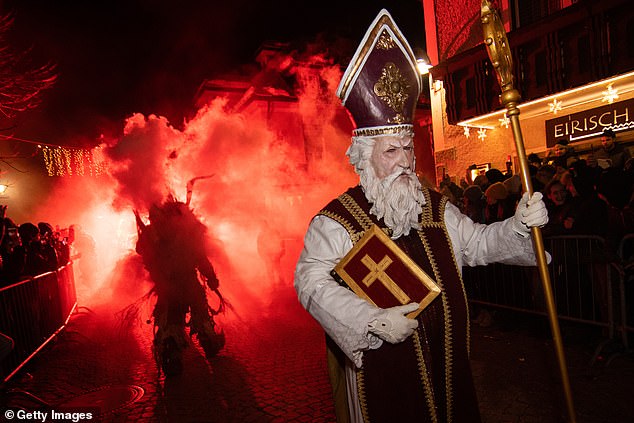 A participant dressed as a mangled, deranged looking monster emerges from smoke and follows another who dons a Saint Nicholas costume in Dobbiaco, Italy, last night

Three Krampuses set off a box of fireworks and accidentally set their outfits on fire.

The transformation of Krampus into a mass spectacle explains the number of complaints about his parades, according to Peter Wiesflecker, a historian of Austrian culture and customs.

Since the 17th century, the Krampus was a side-sick of Saint Nicholas who greeted well-behaved children with gifts on December 6, but his role evolved to scare children at their doorsteps in the 19th century. 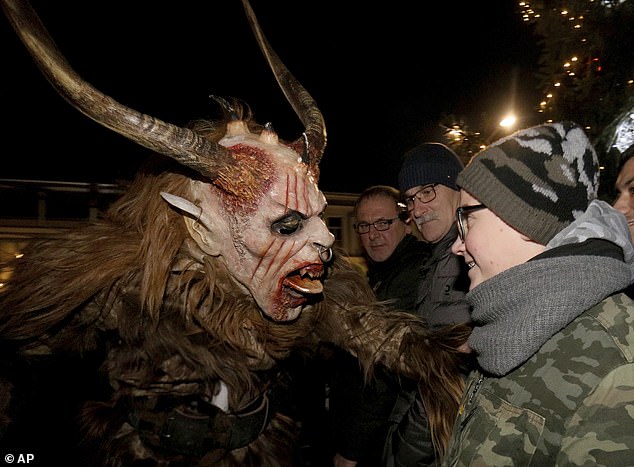 Krampus (pictured in Hollabrunn, Austria, on November 30) set off fireworks and accidentally burnt themselves in their tribute to the pagan monster. A man suffered severe neck injuries after a spectator grabbed the horns of his Percht Alpine pagan goddess costume, in Neumarkt, Lower Austria 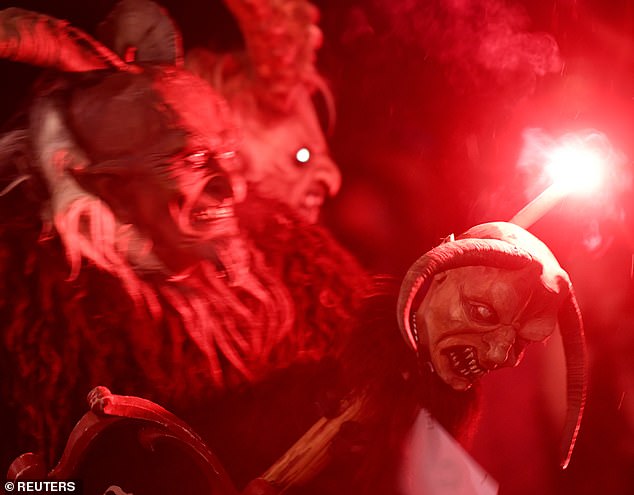 Participants wearing traditional Krampus costumes and masks perform during a Krampus run in the village of Biberwier, Austria November 30

A growing support for Austrian folk customs meant interest in the devil outgrew the Saint, including a Krampus run which saw around 1,000 goat demons roaming Salzburg on November 23.

Traditional Krampus associations in the city have enforced codes for the devilish impersonators to ‘make spectators’ skin crawl with his appearance and movement – not cause fear or even panic’.

The Krampus in Anif, Salzburg, are forbidden from hitting spectators with their branches and cow tails as well as consumption of alcohol until their mask is off.

But attempts to impose this have been difficult as the group stands as an ‘anonymous collective’ which makes it ‘more likely’ they will ‘overstep boundaries’, according to Mr Wiesflecker. 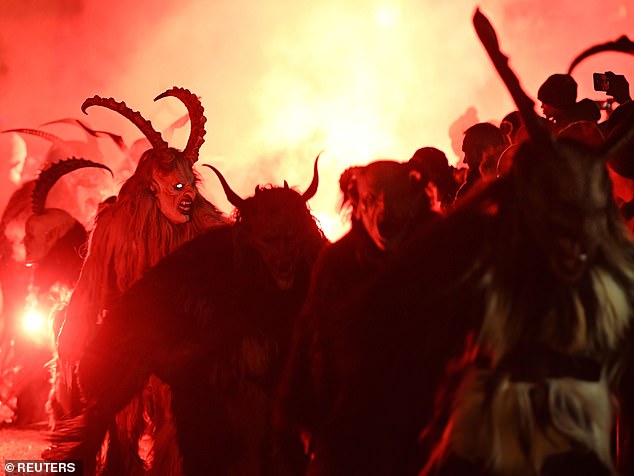 While the Krampus (pictured in Biberwier, Austria, on November 30) is forbidden from drinking alcohol and hitting others with their branches or cow tails, this has proven difficult. Horrifying footage has emerged of a group of devils kicking a person lying on the ground in Sterzing, South Tyrol, Italy 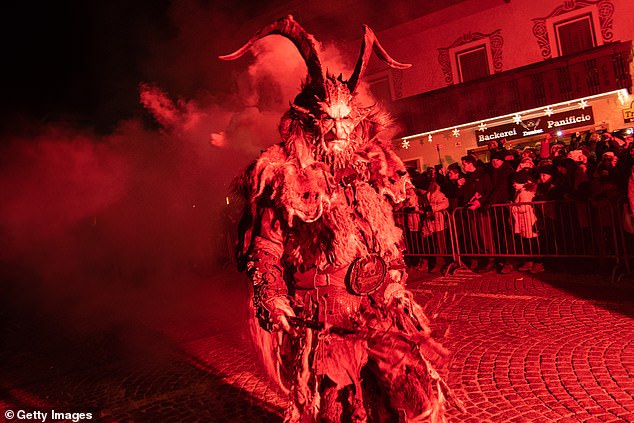 Performers dressed as the Krampus creature parade through the city center of Dobbiaco, last night

Children can escape the evening’s events by heading to the Krampus-free zone.

Aleksander Andonov, of Anif Krampus Association, told the Guardian: ‘The aim of the Krampus is not to hurt people.’

‘On the contrary: we want to take away their fear. In the end, good always wins over evil.’