Gareth Bale has taken to social media to tell his fans he is ‘ready’ for Real Madrid’s Champions League final against Liverpool on Saturday night.

Bale is looking to secure his fifth Champions League triumph and his 16th major trophy when the two European giants go head-to-head at the Stade de France.

Saturday’s European fixture could be the last time Bale takes to the pitch as a Madrid player as he is set to leave the LaLiga giants during the summer transfer window.

After training at the Stade de France on Friday evening, Bale took to Twitter to share a series of photos with the accompanying caption: ‘#UCLFinal ready’.

The three photo’s shared on the social media app saw him walking down the tunnel in the French stadium, heading out onto the pitch from training and taking part in Friday’s session.

Bale could equal Cristiano Ronaldo’s record of playing in five Champions League finals with a surprise role for Real Madrid against Liverpool on Saturday evening.

The former Tottenham winger will also join Ronaldo as the only player to have netted three times in finals of the modern competition if he scores for Madrid.

That would double Bale’s tally in all club competitions at the end of a season in which he has made a total of seven appearances so far.

Bale – who is set to leave the LaLiga giants at the end of the season – is known for performing well during the Champions League.

The Welshman has scored three final goals – including one against rivals Atletico Madrid in 2014 and two against Liverpool in 2018. 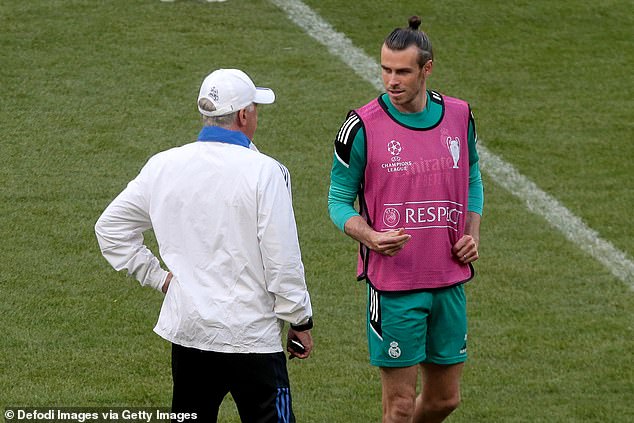 Bale also scored from the penalty spot against Atletico in Milan in 2016 and even won at home in Cardiff against Juventus a year later.

Therefore, Carlo Ancelotti may call on Bale during the showpiece event on Saturday evening.

Ancelotti has already suggested that out-of-contract Bale could target history in the Champions League on May 28.

Speaking after Real Madrid’s last LaLiga game of the season, Ancelotti said: ‘Bale wanted to say goodbye and play tonight if he was fine. He has one last chance as he will be fine for the final.’