The head coach gave the biggest public indication yet that his new two-and-a-half year extension will be agreed imminently after admitting he expects no complications to completing the deal.

Sources claim an announcement could be made before the FA board meeting early next month.

Southgate, whose current £3million-a-year deal expires after the 2022 World Cup in Qatar, is believed to have told senior FA figures of his intention to sign, a huge boost to the governing body given their key objective of securing his future.

The financial details, with a basic salary of £5m not inclusive of bonuses, are said to have been agreed.

Southgate said on Tuesday night: ‘Now it’s an appropriate time to be able to sit with (FA technical director) John McDermott and (chief executive) Mark Bullingham and go through it all but I’m not expecting it to be complicated.’

Southgate can then turn his attention to Qatar. He will not go on the FA’s fact-finding mission next month but is expected to attend the draw in April, where he will ‘double-check’ some of the decisions regarding England’s base. 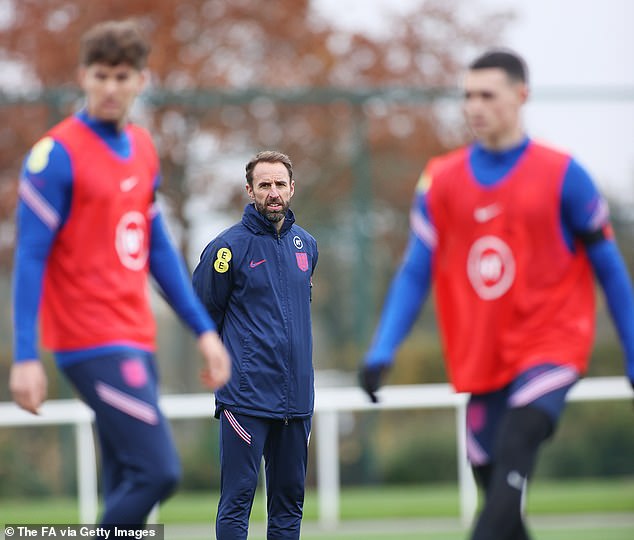 Southgate, whose current £3million-a-year deal expires after the 2022 World Cup in Qatar, is believed to have told senior FA figures of his intention to sign

He must also tackle the issue of a difficult schedule heading into Qatar and has conceded that England are unlikely to play a warm-up friendly just before the tournament, which kicks off eight days after the Premier League is suspended on November 13.

The FA are hoping to secure matches in March against two European heavyweights ahead of next summer’s Nations League to aid preparations.

The squad Southgate selects for those fixtures will provide a strong indication of who will go to the World Cup. But one surprise inclusion could be Crystal Palace left back Tyrick Mitchell as Sportsmail can reveal Southgate is keeping close tabs on the 22-year-old.

He added: ‘It’s going to be interesting to see some of the younger players who are emerging and how quickly their progress is too towards what’s going to happen in the next 12 months.’