Gareth Southgate insists he ‘learned a lot’ about his England players

Gareth Southgate was pleased by the way England came through their testing friendly with well-drilled Switzerland as skipper Harry Kane continued his march towards the national team’s scoring record.

Preparations for this year’s World Cup got under way in front of a sell-out Wembley crowd in the Alzheimer’s Society International against the team 14th in the FIFA world rankings.

Switzerland provided suitably challenging opponents and impressed during the first half, taking the lead through Breel Embolo and threatening to pull further ahead against the stuttering Three Lions.

Luke Shaw’s thumping strike drew England level against the run of play and a late handball gave Kane the chance to complete a 2-1 comeback victory from the spot as they began to gear up for Qatar.

‘I think they’ve got pride in the way they’ve been playing and we talked last year about that and about their record last year,’ Southgate said after their unbeaten streak reached an England record of 21 games in all competitions – a run that includes the Euro 2020 shootout loss to Italy.

‘Of course that can become a hindrance if you just focus on trying to stay unbeaten so the important thing today was how we performed and the test that the opposition gave us.

‘And to see some players who perhaps haven’t played as often for us and some new players as well, which was a really good exercise for all of them.

‘I thought it was a really good test. We went behind, we had tactical problems to solve, we had to defend properly. We learned a lot about some new players and some inexperienced players in an international shirt.

‘Of course towards the end of the game we were able to get more experience and some top players onto the pitch, which made us finish strongly as well and that was important for the team and also for the crowd.’ 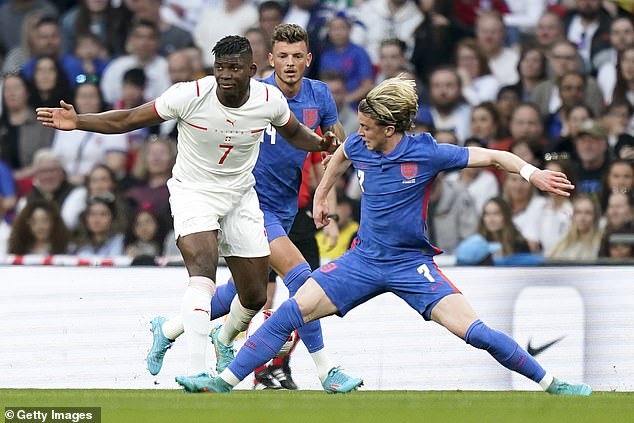 Southgate praised Marc Guehi, Kyle Walker-Peters and Tyrick Mitchell after making their England debuts on Saturday, as well as Conor Gallagher after impressing on his first start.

But Kane took the headlines after moving joint second with Sir Bobby Charlton in the Three Lions’ all-time scoring charts, with his 49-goal haul putting him just four behind Wayne Rooney’s record.

‘I think that the names that he’s in and amongst now are incredible, aren’t they? He will appreciate that history and it will mean a lot to him to be in with those people,’ Southgate said

‘You’d have to say he looks favourite to go do that but I don’t want to put any sort of curse on that at all and say anymore, really.

‘But, again, he wants the team to do as well, so he’s got this dual drive.

‘What’s great is that means whenever he turns up because he’s also got that individual ambition there’s never a camp where he doesn’t look like he wants to play, doesn’t want to be involved or doesn’t want to be at the forefront of things. 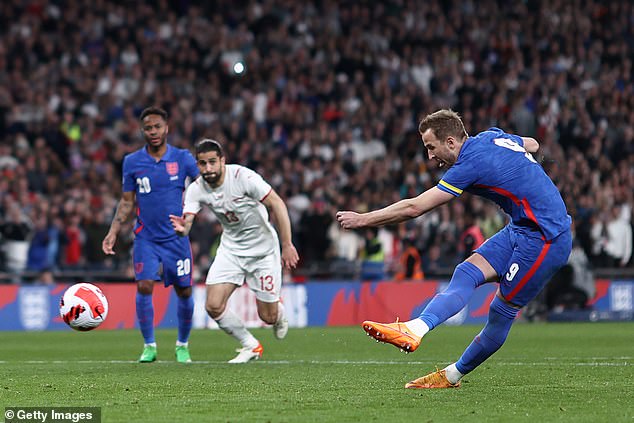 ‘That’s the mentality that then spreads through the rest of the group, so very pleased for him.’

England now face Ivory Coast in a friendly on Tuesday off the back of a match Switzerland boss Murat Yakin felt his side performed well in for the most part.

‘I think we actually had a good game,’ he said. ‘The first half was very intense, we had some really good chances and we controlled the game in parts but we weren’t efficient enough.

‘We had some unnecessary losses of the ball, especially in the last two minutes before the break.

‘In general for my taste we had too many wrong passes and individual mistakes. We gifted England’s goal but I think in general it was a good effort from our team.’