By Brooke Davies For Mailonline

The BBC and Gary Lineker have received waves of online backlash after making a ‘sexist’ bra joke and an all-male band were chosen to play over the Lionesses’ end montage.

The sports broadcaster said in a now deleted tweet, ‘the Lionesses have only gone and done it, and Kelly is England’s heroine, bra none’ beneath an image of matchwinner Chloe Kelly.

One twitter user said: ‘You’ve reduced a truly game changing moment for women and girls into a puerile sexist joke. Do you comment when male players take their shirts off? Is it any wonder people don’t take the women’s game seriously.’ 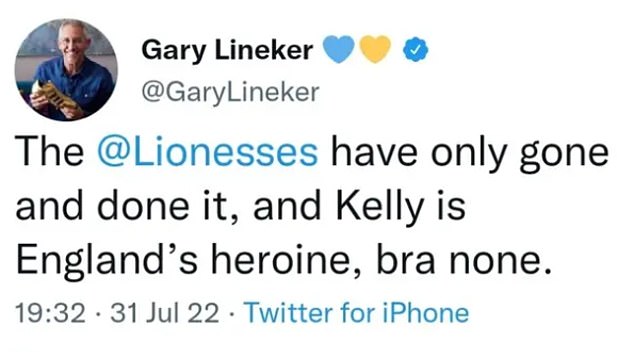 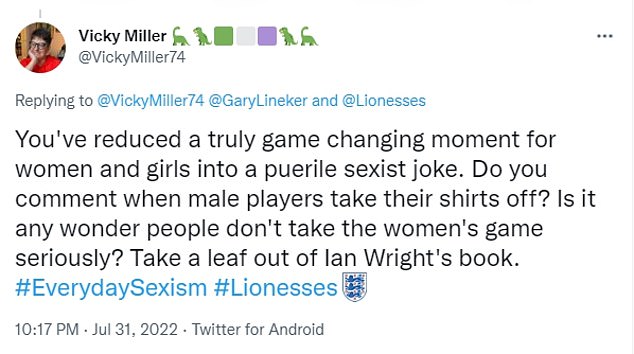 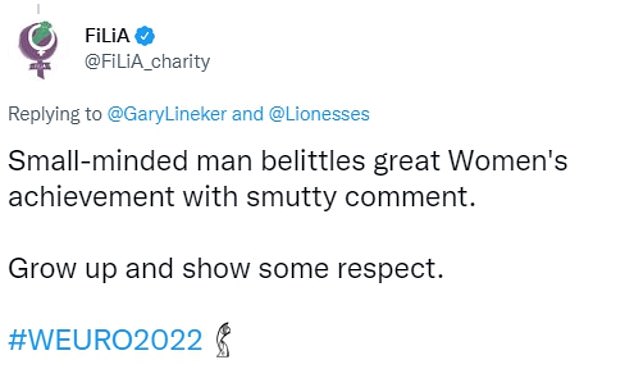 Twitter users were angered over Gary Lineker’s bra joke, which has been described as misogynistic

Another described the former English footballer as ’embarassing’ and told him ‘women did what you couldn’t and you reduce their victory to a bra joke’.

On Instagram, Gary has amended the caption to be ’22 women chase a ball for 90 minutes and, at the end, England actually win. Congratulation Lionesses’ but angry comments remain underneath.

One Instagram user said: ‘Not sure why her underwear is relevant though? #everdaysexism.’

Another said: ‘Look forward to you celebrating a male win by commenting on their jock straps. Outrageous.’

The BBC has also received online criticism over their choice of all-male band Kasabian to play out the broadcast of the Lionesses’ win.

Twitter users described the BBC’s choice as ‘really weird’ and ‘an own goal’.

One user said: ‘Were there no female artists available to play the tournament out, BBC?’

Others described it as a ‘slow boring song’ and the BBC needed to ‘amplify awesome women musicians’.

Former front-man of the band, Tom Meighan, was found guilty of domestic abuse in 2020, when he hit his partner over the head and dragged her across the room. 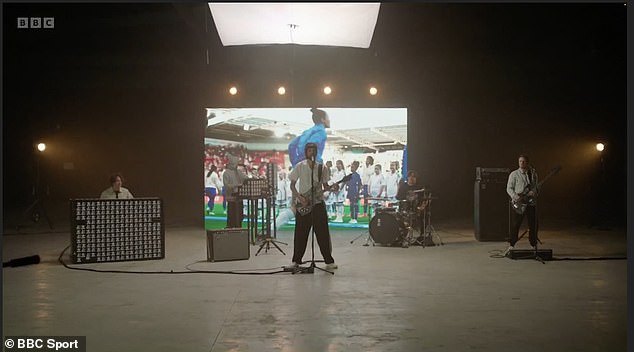 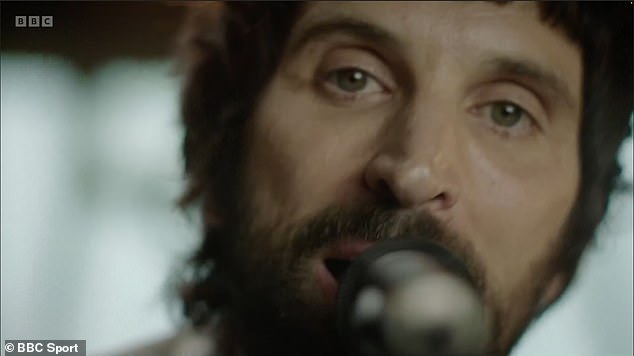 Gary Lineker has been hauled over the coals a number of times for his tweets. The presenter deleted a post last year about his BBC pay cut after volunteering to have it slashed by £400,000. He wrote: ‘Another one? Christ, nobody told me.’ He later deleted it.

Lineker also deleted a post in 2019 after taking a swipe at the New Zealand rugby haka. Ahead of a match against Canada, he wrote: ‘Must be hard not to just laugh at this if you’re the opposition.’

He removed it, adding: ‘I’ve deleted the tweet as it wasn’t intended that way in the slightest. I was just wondering why as an opposing sportsmen it would be in anyway intimidating after seeing it for so many years. I should probably have phrased it that way.’

When BBC Director-General Tim Davie took over the helm, he vowed to stamp out political tweets from its stars. Rather than welcome the move, Lineker mocked him, replying ‘nah’ in response to suggestions he should be ‘terrified’ of the clampdown.

As a freelance presenter Lineker has space to voice his opinions and has not been hamstrung by the BBC’s code of impartiality which restricts full-time workers. He is among a number of stars not bound by the social media rules.