The 57-year-old Match of the Day host made the video for Channel 4’s Stand up to Cancer 2018 campaign and revealed that he was plagued during his son’s illness by a recurring nightmare that he was carrying a ‘small white coffin’ and would wake ‘in a cold sweat’.

George, now 26, was diagnosed with acute myeloid leukaemia as a baby after Gary, then in his early thirties, and ex-wife Michelle Cockayne noticed a lump on their young son’s head.

Gary said the couple were told more than once that George might not survive the night. Viewers watching the four-minute short said it was ‘moving’ and ‘powerful’.

The 57-year-old Match of the Day host left Channel 4 viewers in tears after a short film aired for the Stand up to Cancer campaign. Lineker revealed that he would wake up in a cold sweat after having nightmares about burying his son George after he was diagnosed with acute myeloid leukaemia as a baby 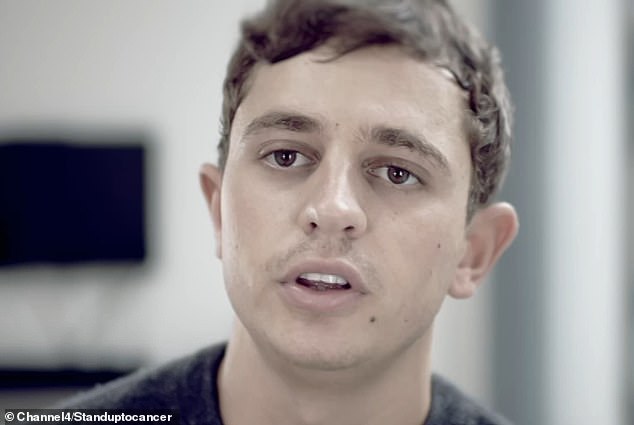 Now 26, George went on to make a full recovery despite doctors warning Gary and his ex-wife Michelle Cockayne that their son might not make it through the night on more than one occasion 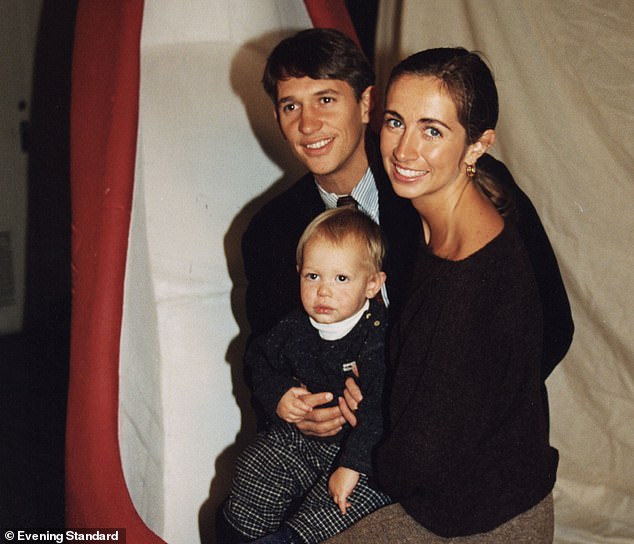 The player was in his early thirties when the family were given the devastating news that George was seriously ill with the rare blood cancer (Pictured Gary, with ex wife Michelle and son George)

The former Spurs and England star said: ‘It was devastating. The doctors were very honest with us – they gave us between a ten and 20 per cent chance of survival. It was tough, really, really tough.’

He said the couple lived ‘by the minute’ as they watched their young son ‘pumped full of drugs’.

Gary told viewers: ‘Those first few days were traumatic, we were told on at least two occasions that the chances of him making it through the night were slim.

‘I had this recurring nightmare of carrying this small white coffin. And waking up in cold sweats everytime I had it. Thankfully I never had to live that scenario.’ 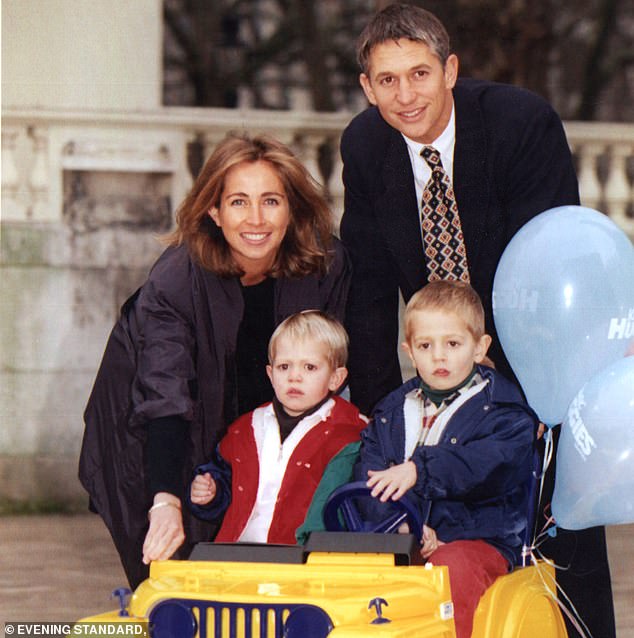 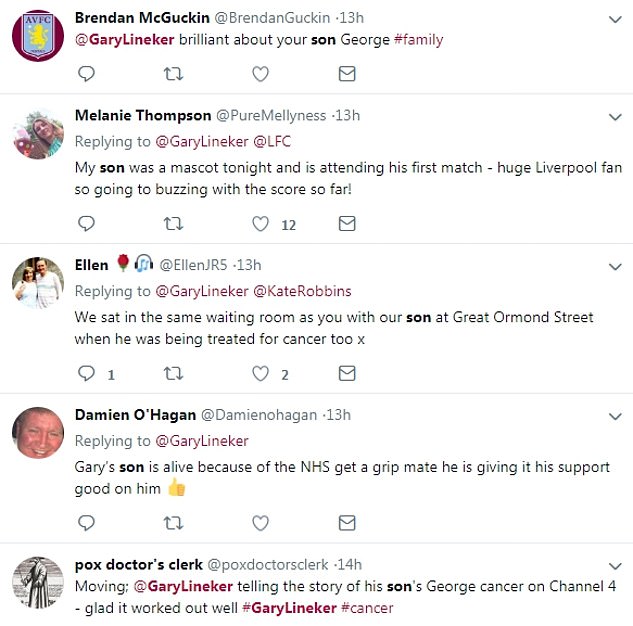 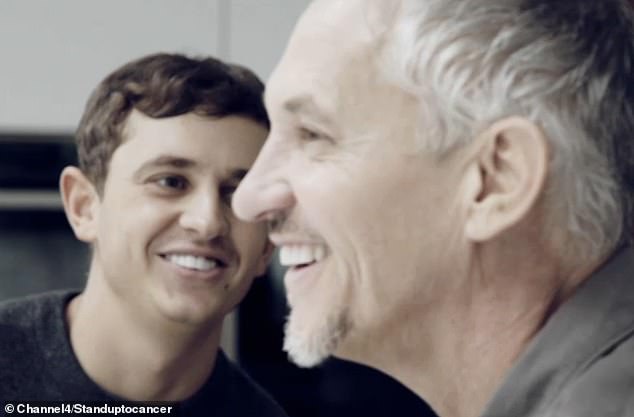 The father and son appeared in the emotional short film, which aired as part of Channel 4’s Stand up to Cancer campaign 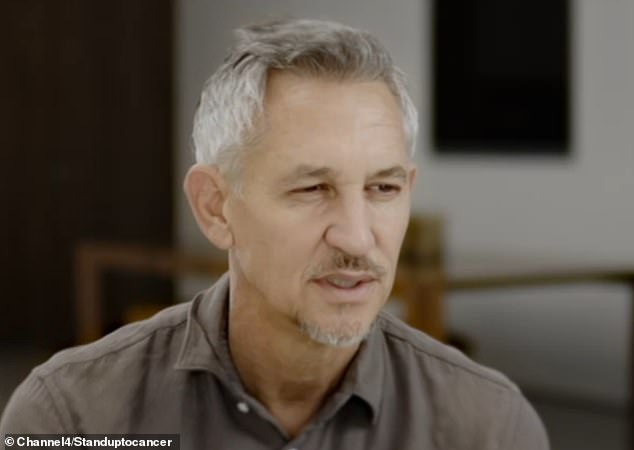 Viewers praised the former Spurs and England player’s honesty about the ordeal, saying they were moved to tears by Lineker’s account of his son’s illness 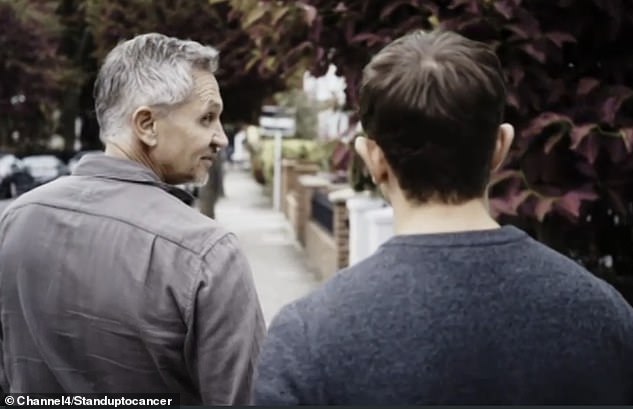 Father and son: George said he feels ‘lucky’ to have survived the rare blood cancer

Those watching at home thanked the star for making the film.  @SarahOAtDell  wrote: ‘@GaryLineker Thank you for sharing your #SU2C #StandUpToCancer story… 1 in 2 of us will be affected by cancer. The numbers are appalling. Your story gives people hope.’

@pipg269 added: ‘@GaryLineker Powerful Stand up to Cancer ad.. Respect to you and everyone gone, or going through this. Xx #perspective’

What are the symptoms of leukaemia in children?

Fatigue and pale skin – this is because leukaemia can cause anaemia which makes a child feel weak, tired and light-headed.

Rash – children may have small, dark spots that look like common rashes if the leukemia cells spread to the skin

Bone or joint pain – this is caused by a build up of leukaemia cells near the surface of the bone or inside the joint.

Swelling of the abdomen – leukaemia cells may collect in the liver and spleen causing them to enlarge.

@franks_years wrote: ‘Beautiful piece from @GaryLineker and son George on channel 4. Huge respect and inspiration for those facing up to cancer.’

@MrsC118 penned: ‘@GaryLineker thank you for that cancer short on c4 we’re facing the nightmare with my 3 year old. I have the same dream/nightmare xx’

And @EllenJR5 said she remembered seeing the football star in hospital with his son. ‘We sat in the same waiting room as you with our son at Great Ormond Street when he was being treated for cancer too x’

George, one of four brothers, finished the film by telling viewers he knows how ‘lucky’ he is to have survived.

The Stand Up To Cancer campaign, first launched in 2012, returns to Channel 4 this week raising money for Cancer Research UK via a host of celebrity challenges, fund-raising events and special films.