By Sam Cooper For Mailonline

The decision to award Liverpool a penalty late on against Crystal Palace has been blasted by pundits who called it ‘appalling’ and a ‘shocker.’

As the game entered the final minutes, Liverpool held a narrow 2-1 lead as home side Crystal Palace pushed for an equaliser.

Liverpool had lead 2-0 thanks to first-half goals from Virgil van Dijk and Alex Oxlade-Chamberlain but a second-half strike from Odsonne Edouard gave Palace a chance.

With the game entering the final minute of normal time, Liverpool were awarded a controversial penalty.

Diogo Jota collided with Crystal Palace keeper Vicente Guaita but the contact appeared to have been caused by the Portuguese player.

Referee Kevin Friend initially did not give the spot kick but following a word in his ear from VAR referee Craig Pawson, the on-field ref went to look at the pitch-side monitor.

After a couple of replays he turned to point towards the spot and Fabinho duly converted to put the tie beyond Palace’s reach.

The decision however has been heavily criticised especially from Match of the Day host Gary Lineker who described it as ‘appalling.’

‘That is a genuinely appalling decision,’ he said on Twitter. 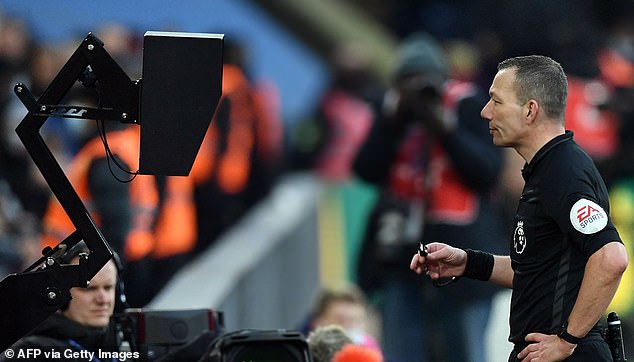 He was supported by his BBC colleague Jermaine Jenas who said it was a ‘shocker.’

‘Another absolute shocker from VAR, our standard of refereeing is so bad’ the former midfielder tweeted.

It was not just in the football world that the refereeing was criticised as golfer Lee Westwood also tweeted his thoughts.

‘That’s a shocking decision! And I’ve backed Liverpool!’ he said.