‘The Manchester United players have BOTTLED it… I expected so much more’: Gary Neville accuses Erik ten Hag’s side of not turning up for 6-3 derby defeat at City, highlighting their ‘anxiety’ and ‘nervousness’ on the ball

Gary Neville accused Manchester United’s stars of ‘bottling it’ after being demolished by Manchester City on Sunday.

Erling Haaland and Phil Foden both scored hat-tricks at the Etihad in a thumping 6-3 derby victory described as ‘embarrassing’ by former United captain Roy Keane.

Manager Erik ten Hag admitted his team ‘lacked belief’ on a chastening day that saw club legends round on the team.

Former United defender Neville said: ‘The Manchester United players have bottled it, there is no doubt. They have not handled this derby at all. I expected so much more.

‘There has been no composure. They have never settled. They have been anxious and nervous on the ball and pulled apart by an outstanding team.’

Keane was left seething by the display. He said: ‘From the players’ point of view, they really should be embarrassed. You can’t go in at half-time in a derby game 4-0 down, it’s hugely embarrassing.

‘As brilliant as City were, United were desperate. Particularly in midfield. Defensively all over the shop. Even the consolations, they scored a few goals but the game was over, City had switched off.’ 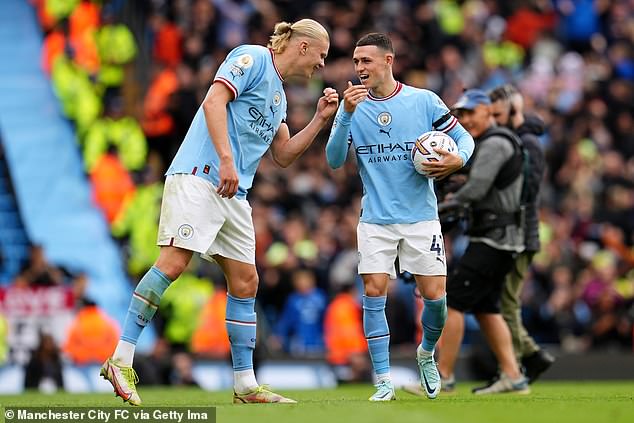 Ten Hag, who also oversaw a humbling 4-0 defeat at Brentford earlier in the season, claimed his squad did not have the correct mindset to disrupt the Premier League champions in a stinging rebuke of the players.

The Dutchman added that they had let down the club’s fans, hundreds of whom left the Etihad Stadium at half-time.

‘It’s quite simple, it’s a lack of belief,’ he said. ‘When you don’t believe on the pitch then you can’t win games. That is unacceptable. We get undisciplined at following rules and you get hammered, that’s happened today. For the first goal we won the ball and could have created a great chance but instead we gave it easily away and then it was like a pack of cards. I criticised them, I told them. 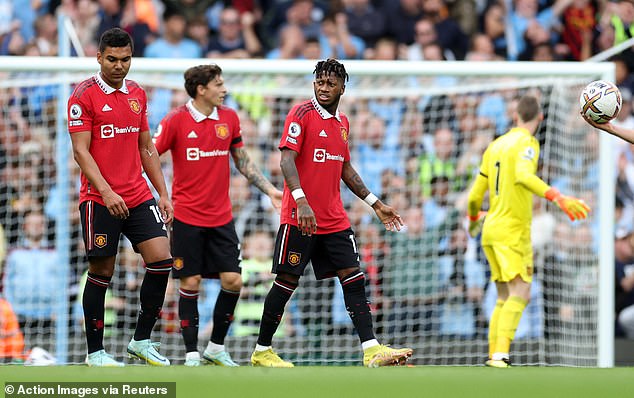 ‘All the credit to City, but it’s nothing to do with City, our performance was not good. It had to do with the belief as individuals and as team. It’s believing you can beat your opponents. We don’t follow principles, don’t act as a team, and it went.

‘In this moment I can’t think about positives. We let our fans down, we let ourselves down and we’re hugely disappointed. There are never excuses.’

Ten Hag also claimed he did not introduce Cristiano Ronaldo from the bench out of respect for the veteran. ‘I wouldn’t bring him in because of the respect for Cristiano, for his big career, and the other thing was the advantage I could bring on Martial. He needs the minutes.’

Christian Eriksen added: ‘We lacked courage to play out from the back and allowed them to play at their strength. The focus is on ourselves and there are a lot of things we need to change and to do better.’