Gary Neville and Jamie Carragher picked eight of the same players in their Premier League team of the season as they did their traditional mid-season awards on the final Monday Night Football show of 2021.

After Newcastle’s 1-1 draw against Manchester United on MNF, the Sky Sports pundit pair selected their preferred XI from the top-flight campaign so far, as well as revealing their best player, young player and coach of the year, among many more.

Although they concurred over awards for Mohamed Salah, Phil Foden and Pep Guardiola, they disagreed on the final three in their mid-season team of the year.

There were plenty of surprises, with a loanee making Carragher’s side and a Wolves star chosen as Neville’s signing of the season, and plenty of disagreement as Liverpool legend Carragher jokingly berated Man United icon Neville for some of his choices. 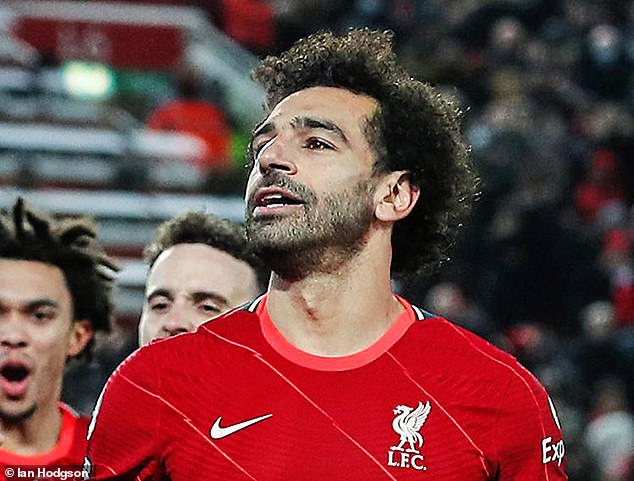 The pundit pair agreed on several of their award winners, with Liverpool’s Mo Salah prevalent 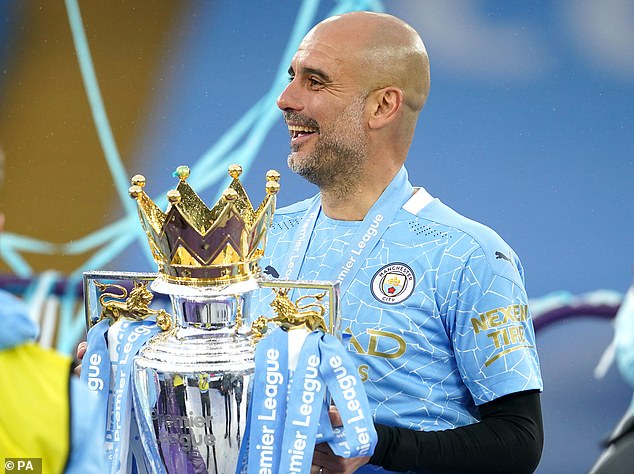 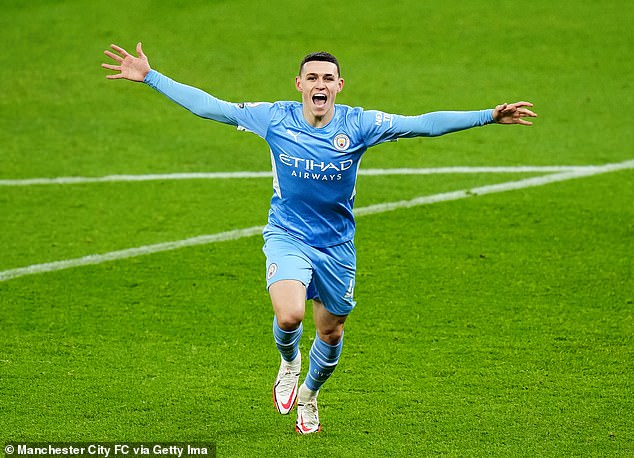 But they plumped for different formations, with Neville picking City’s Ruben Dias as a third centre back alongside Rudiger and Van Dijk with Alexander-Arnold and Cancelo as full-backs in a 3-4-3 formation favoured by Thomas Tuchel at Chelsea.

In midfield, Neville partnered Rice with City’s defensive anchor Rodri, while between the sticks he plumped for Reds star Alisson Becker.

Carragher, on the other hand, picked Arsenal’s £30million summer signing Aaron Ramsdale in goal, went for a flat back four, allowing him to select an extra man in midfield, with Crystal Palace’s loan star Conor Gallagher and in-form City man Bernardo Silva either side of Rice.

Discussing his own team, Neville said: ‘I just thought Dias, Van Dijk, Rudiger have been absolutely outstanding at their clubs. I wanted to get two midfield players in with Rice and Rodri.

‘Rodri has been absolutely incredible this year at City, absolutely amazing. Underrated, underappreciated, someone who does the job week in, week out. The improvement in him is massive.

‘The full-backs – it’s unlucky on Robertson at Liverpool but Cancelo and Alexander-Arnold have lit up the league this year from full-back, just absolutely brilliant.

Coach of the year: Pep Guardiola.

Moment of the year: Arsenal v Brentford, return of the fans.

If I could sign one player for Liverpool: Kevin De Bruyne.

Coach of the year: Pep Guardiola.

Moment of the year: England v Denmark in the Euro 2020 semi-final.

If I could sign one player for Manchester United: Kevin De Bruyne.

Carragher queried: ‘How the hell have you not put Bernardo Silva in your team?’ before Neville replied simply with: ‘I just haven’t.’

On Carragher’s team, Neville responded to the Liverpudlian picking Palace loan star Conor Gallagher by restating the credentials his Rice-Rodri double pivot, despite Carragher questioning whether or not they’re the ‘same player’.

Guardiola has led his side to six points clear of title rivals Liverpool at the halfway stage of the Premier League season, although Jurgen Klopp’s men have a game in hand.

City are also playing scintillating, entertaining attacking football and are still managing to show a ruthless cutting edge despite having lost legendary striker Sergio Aguero (and soon talented young forward Ferran Torres too) and not signing a noteworthy centre forward. 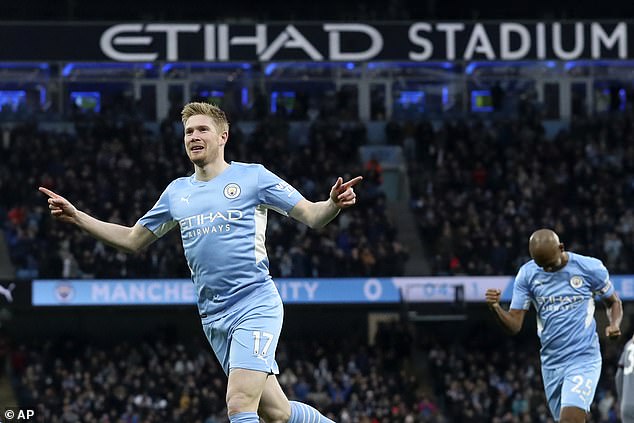 Both admitted if they could sign one player, it would be City playmaker Kevin De Bruyne (left)

Versatile attacking midfielder Foden has firmly cemented himself as a crucial part of Guardiola’s first-choice side despite his tender age of 21, and has performed brilliantly in almost all the big games where he’s graced the stage.

Salah, with 22 goals in just 24 appearances in all competitions so far this season, is arguably the most in-form player in the world at the moment, and has a claim to being the best player in the world given the inconsistencies of Lionel Messi at Paris Saint-Germain and Cristiano Ronaldo at Manchester United.

Moreover, both Neville and Carragher admitted if they could only sign one player for their respective clubs, it would be City playmaker Kevin De Bruyne, despite the Belgian having missed parts of this season through injury.

In terms of the title race, both backed City to win the title, but Neville had the rest of the top four finishing: Chelsea, Liverpool, Manchester United, while Carragher plumped for: Liverpool, Chelsea, Tottenham, who he has been drawn to since Antonio Conte arrived. 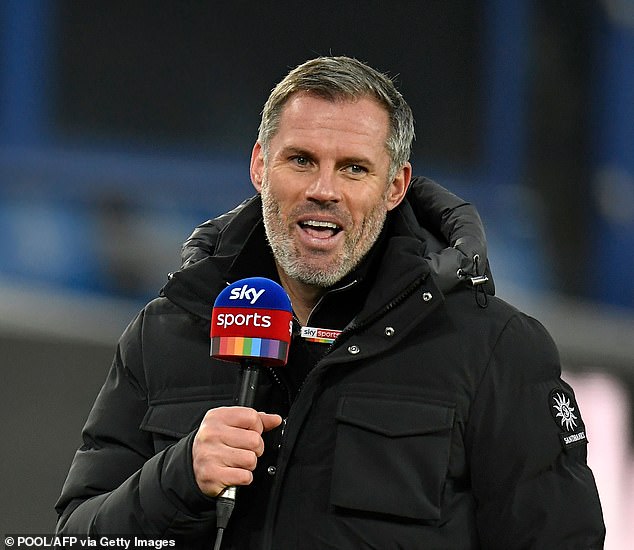 There were plenty of surprises, with Carragher naming a Crystal Palace loanee in his ideal XI 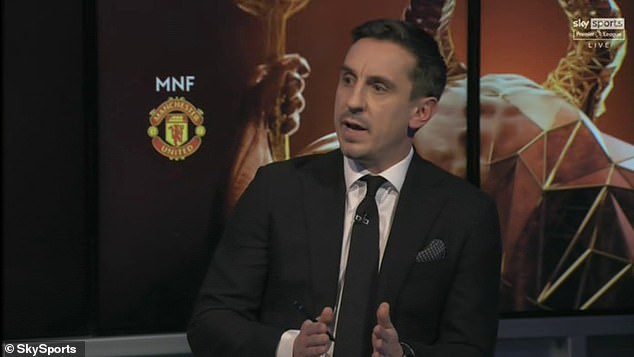 Neville (pictured above), perhaps unusually, chose a Wolves player as his signing of the season

While Neville’s signing of the season was – perhaps surprisingly – Portuguese goalkeeper Jose Sa at Wolves, who replaced Roma-bound compatriot Rui Patricio, Carragher also went for a summer signing between the sticks in Arsenal’s Ramsdale.

Sa, 28, has the best save percentage in the division with 80 per cent and has been a crucial part of the Midlands side’s stern backline, while Ramsdale, 23, was signed for big money and was initially expected to be a backup to Bernd Leno but has broken into the Gunners first-team and helped transform their style of play.

Carragher’s best moment was the return of fans to stadiums on the opening day of the Premier League campaign, when newly promoted Brentford downed Arsenal 2-0 in a raucous, febrile atmosphere.

Neville, for his part, chose England’s dramatic Euro 2020 semi-final win against Denmark as his best moment, admitting being there at Wembley helped push him towards making that decision.