‘He realises what he’s done and he goes “oh look it’s an accident”‘: Gary Neville convinced Ben Godfrey MEANT to stamp on Takehiro Tomiyasu’s face… but admits he ‘can see why it’s not a red card’ with VAR unable to prove intent

Gary Neville and Jamie Carragher know all about ‘leaving one on’ rival attackers, and they exposed Ben Godfrey after he went in studs-up on Takehiro Tomiyasu’s face.

A seething, tense Goodison Park crowd set the tone for a feisty clash with Arsenal on Monday, and Godfrey’s challenge 28 minutes into the first-half was a symptom.

As Arsenal right-back Tomiyasu tripped on Allan’s lunging tackle at the touchline, the ball deflected away and Godfrey planted his studs on the stricken Japanese star’s chin. He eyes were elsewhere at the time, but the movement looked avoidable.

The incident went to VAR, who let the Toffees man off scot-free.

‘You’re talking to two of the masters of following through into the face and making it look like it’s accidental, Neville said on Sky Sports, stood next to the Liverpool legend.

‘We think he definitely means that. He realises what he’s done and he goes “oh look it’s an accident.”

‘As a professional, definitely 100 per cent he means that however I can see why VAR have said it’s accidental and we couldn’t prove it. But as a professional you know. 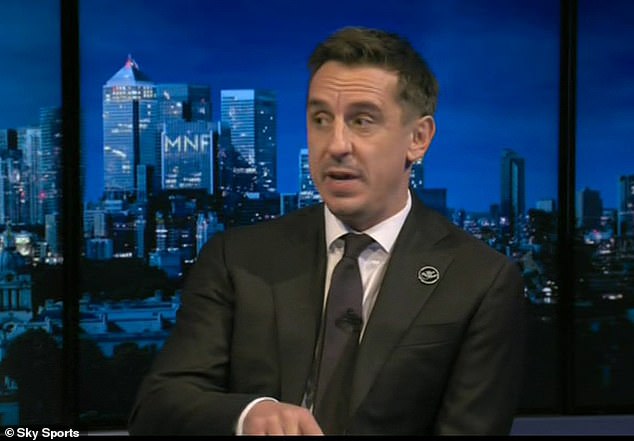 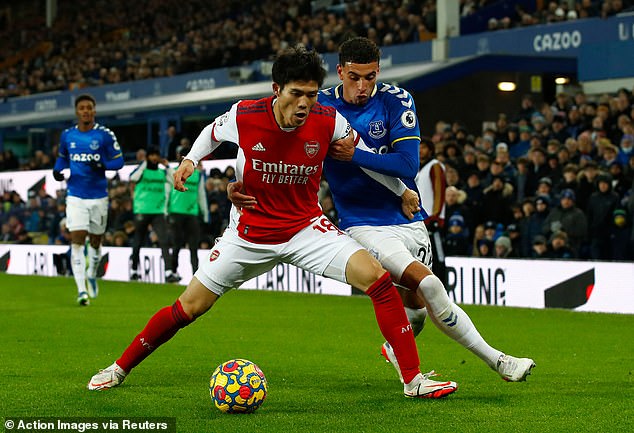 Arsenal fans were furious on Twitter, with @MrLiamArnold writing: ‘This is utterly disgraceful from Ben Godfrey. Looks exactly at Tomiyasu, then looks away once he decides where to stamp him. Should be a red card.’

@rosentweets said: ‘According to the multiverse theory there are an infinite amount of universes and this is the only one in which Ben Godfrey hasn’t been sent off.’

The VAR calls certainly didn’t all go in Everton’s favour, with Richarlison celebrating twice before the referee rained on his parade.

Martin Odegaard fired Arsenal ahead moments before the break, before Everton’s Brazilian striker finally got on the scoresheet at the third attempt on 79 minutes, before Demarai Gray’s screamer won it in injury-time. 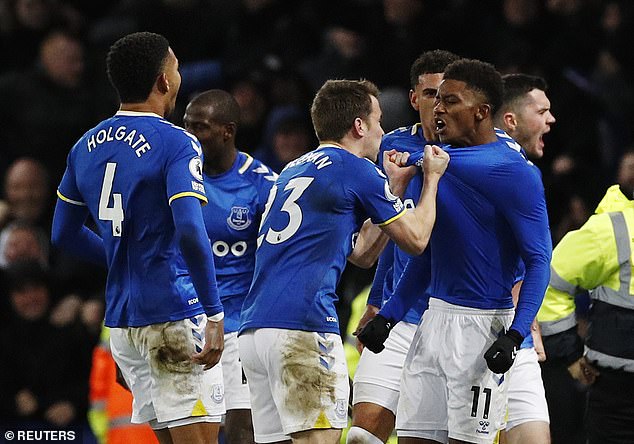